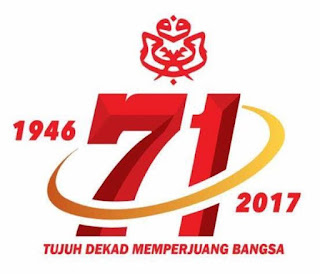 It's inception in 1946 is synonymous with the struggle for independence and the formation of the new nation of Malaya in 1957 which then enlarged to include Sabah, Sarawak and Singapore (before it was sacked out in 1965) become Malaysia in 1963.

UMNO formed the first coalition called Perikatan and later it was enlarged into Barisan Nasional. Since independence, the coalitions led by UMNO have been ruling the country and majority of the states in Malaysia.

It holds two third majority but has since relinquish that dominance in the 2008 general election. It is believed that BN will never ever get that two third dominance. Not only that, the general election this time around will  be more challenging than the previous one.

The sacked UMNO leaders and an influential former Prime Minister was joined the opposition with an resolved to topple Prime Minister, Dato Najib.

Since they failed to topple him from his position in UMNO and in Parliament, they had no choice but to topple UMNO and BN government while in bed with sworn enemy DAP and other opposition parties - old and newly formed.

It is not usual to celebrate 71st anniversary in a big. So the celebration has relevance in preparing for the general election.

The preparation this time around is a tricky bit with the challenges of securing young and Chinese voters.

Then there is also the challenge of appeasing the different expectation of urban and rural voters. And the complain on the public wallet due to rising prices that was blamed on GST and government across the board austerity drive.

There are various challenges with the changing political terrain. But we are not about to raise anything major but something small which can greatly affect UMNO's performance in the next election.

It is about a state assemblyman representing a rural constituency in a state in Semananjong with significant number of seats in Parliament. It is not his real name but lets just refer him as Hamdan.

Hamdan is a local lad, well liked by his kampong kins and constituents. He shows concern for them and is earnest in his community work. In Malaysian politics, the constituents welfare is more important in winning and retaining seats than being participants in debate on policy and annual budget.

Hamdan's problem is he is too vocal and critical.

Naturally, it annoys the Minister-Member of Parliament, the state Menteri Besar and even the UMNO Division Head. The way our third world politics and cultural make-up, that is no way to behave to your superior.

Face means everything in our society. Hamdan could have applied his political skill in expressing his concerns through the "proper channel". Most UMNO politicians are apt at pulling hair out of flour without splattering four all over the place.

But he did not.

Maybe Hamdan is concerned for his subjects. His superior reacted by applying pressure on him and denying him allocations. The compulsory allocation is likely there for his constituents but the process could be slow and additional request would not be entertained.

In the normal circumstances, Hamdan's days are considered numbered.

However, he is quite popular that he could survive on his own. He is related to a famous nationally reknown religious teacher but a member of PAS. It makes him influential because PAS members liked and voted him.

Despite being denied allocation, Hamdan gets help elsewhere.

But now that there is a plan to replace him with the UMNO Division head, popular request could demand he still run. He has no plans to leave the party.

Party loyalty is everything in UMNO but the decision of the leaders have to be strictly obeyed. That is the glue that keeps the party alive for 71 years.

Words are an opposing party are courting him. His name is being bandied about to jump over either on the day of nomination or upon winning on UMNO ticket. If he is not selected to defend the same seat, he could jump earlier and run on the opposition party ticket. [This plan was discussed here]

He is expected to win the seat again. Whether there is any truth that he is crossing over, it has to be ascertain. If he is hurt, he could do so out of anger.

Nevertheless, he can still be persuaded. His love for the party is still there.

But the odds is against him. He could be removed and the white areas has already turned grey and it is likely to be deep grey.

It is a normal story in politics and the power game. Party discipline will usually take precedent over other factor.

However, this time around UMNO needs every seat that it can hold on to. It is a tight race and it is not just winnable candidate that is needed but a must win candidate. Only candidates wanted by voters should be put up.

It is a non-issue in normal circumstances. But this time around, the answer is clear. Hamdan is the sort of candidates UMNO need to offer to the voters. Internal politics should take a back seat under current citcumstances.

It is a dilemma and an immediate one. It is not just UMNO but other parties too have such situation. Politics involve people and people have feelings, emotions and preferences.

However, can this be an exception where UMNO and its  leaders and members could be mature enough after 71 years of age to put party and people interest above personal interest?

Think about it and happy 71st anniversary.

The danger zone are at middle class income voters and new aspirants youth graduates and college leavers. Don't just sit around and shaking hand. 1MDB and corruption are just news or daily news like Gotham city. But the dwellers keep on asking where's the job and money.