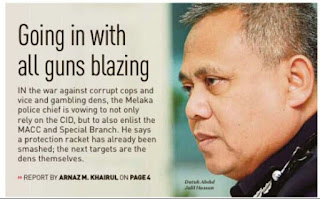 Apart from the case of Dato Ramli Yusof, hardly do this blog criticise the police force.

In appreciation for their contribution to the security of the nation despite personal difficulties, limited resource, pre-war police stations, poor working condition, and lower-than-army pay and perk, it is unfair to burden them more than they should be held for.

The recent wave of arrest for corruption by MACC on law enforcement officials, in which a corporal was caught with RM800,000 in his safekeeping, three cops held for protection racket, two OCPD involvement in illegal gambling money, collusion with drug syndicates, harassment on sub-ordinates, outsider could transfer out officers, dirty loyalist cop retained, demand for sponsorship, etc, is too alarming to be ignored.

It confirms how corrupted the country has turned out. His Majesty Sultan Nazrin of Perak has every right to be concerned.

This is not a source of political ammunition.

No amount of pacifying of the media or lip service to ensure corrupted cops to be arrested, new rule on sponsorship to be drafted, and lecturing on ethics will appease an ensuing public uproar.

The most revolting statement has to be the commitment given by the Melaka Chief of Police, Dato Abdul Jalil Hassan to tackle those protecting gambling den and vice den [read NST here].

It is pure bullshit as his statement means he is only taking action now.

He cannot not be aware that such activities were thriving immediately within months after the last general election, in which Melaka gained a new Chief Minister.

In Melaka, it is an open secret that these illegal operators have been operating with the cover of police, local authorities, politicians and even suspects are linked to CM office. Blogs have been written to expose such activities.

It is thriving in Selangor, Kuala Lumpur, Penang, Johor and other states too. 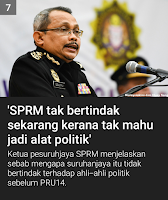 Dato Dzulkifli of MACC have advised political parties to not select candidates suspicious of involvement in corruption.

MACC will not interfere with the process of democrasy but he will deal with the politicians after the general election without fear or favour.

In the meanwhile, it is not believable that the CPO only know about it now.

It reminded of one police high official giving a warning to illegal gambling operators to close up within a week as though signalling them to clear out.

The closure to the incident of Along Taman's musclemen beating up on an innocent lorry driver is also suspicious. He is known to control illegal gambling outlets in few areas in Kuala Lumpur.

Few bad apples have certainly shamed the many good cops that deserve the praise, proper review for advancement, and promotions and rewards. 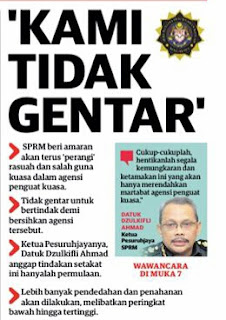 As Utusan Malaysia's Zul Bakar revealed in his column here, MACC Commissioner had told him of the plan to pursue illegal online gambling involving law enforcement.

MACC has proven that they are unafraid to take on another law enforcement agency to abolish corruption.

But will it lead to an internal war between law enforcement agencies as happen in other country?

There have been cases of one enforcement agency blocking the work of another.

Agency held other law enforcement officials under lock-up to scare them off from carrying out their duties.

Most scary, but unbelievable, bomoh or black magic are casted on good law enforcement officials that could lead to death as yours truly witnessed few happening to close friends in various services.

The exposed happenings of pressure from superior and need for side income to sustain livelihood should not be brushed off by the Deputy Prime Minister and Home Minister, Dato Dr Ahmad Zahid Hamidi as poor excuse. 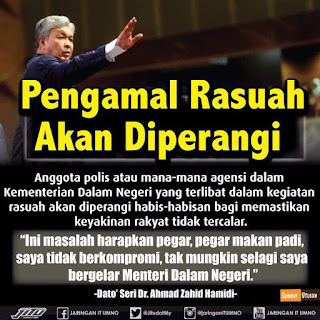 These are serious issues for the Minister to take up.

However, that incident has seen many twists and turns that the line between the innocent and guilty is a blurry one.

For Zahid, who was previously with MINDEF, he should have the knowledge and experience to address the significant discrepency in the salary, and perk of police from the top to more importantly, the bottom.

As one low level police listed:
Justified or not his grievances, one can summarised that police welfare has been neglected by government or the Police Cooperative (unlike LTAT has turned into a multi-billion conglomorate). All these happening after 207 years of existence.

One former IGP, who always had the welfare of the police force in mind, ended his career in a tragic manner due to politics.

Tan Sri KSP, please get your multi-coloured shoes on and listen up. 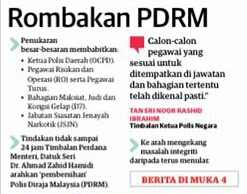 However, these cannot be the reason for police to take bribe. If it is not because the law says so, our moral and ethical conscience should the guide.

Society must take up its fair share for giving business to operators of vice, gambling, narcotics etc. As one former IGP (naturally to remain anonymous) texted this morning:


Its not just about cleaning police, its society as a whole. Who started this negative culture, contribute to it and make it a product of society. Its not an excuse to defend police, but corruption must be looked fr a very broad prospective.

In my years of public service, hundreds of public servants, not to mention police officers, who  had been sent to jail or reprimanded but the rot in corruption continues. Lets look at some very 'clean' country. Perhaps Malaysia can learn from there.

Sadly, we had abandon the Islamic way of life.

Its not only In Melaka,its everywhere.Just look at wedding receptions by these officers,extravagant,lavish,you name it.The culture is deeply embedded in the force and society.