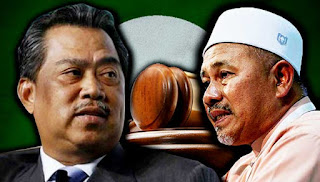 FMT report on a survey done late last year by those who later joined PPBM was strange.


The survey polled 3,000 people in 30 parliamentary constituencies in Barisan Nasional (BN) and opposition-held states, as well as Sabah and Sarawak. The survey, conducted late last year, was commissioned by a group which has now joined PPBM.

That is not a conclusive study to show Malaysians want Muhyiddin.

Embarassed by Rais's conclusion, party’s information chief Datuk Kamaruddin Md. Noor was reported by The Mole here to acknowledge it is inconclusive and outdated.

Such survey could be bias and manipulated. There is intention when it praised PAS profile as the most popular party in the country, as reported by MMO here.

True enough, sources from within PPBM claimed there was no such survey conducted. It is fake news game.

It was Muhyiddin's attempt through his trusted lieutenant, Rais to entice PAS.

It is known that Muhyiddin have been in-communicado with PAS Deputy President, Tuan Ibrahim Tuan Man.

Otherwise, how would Tuan Ibrahim be able to claim Muhyiddin agreed in principle with RUU 355 if Muhyiddin had not expressed his view to him? [Read FMT here]

Muhyiddin made no attempt to deny that he met Tuan Ibrahim when he was reported by FMT here as claiming it is inaccurate to claim that is the position of PPBM.

He is not lying as it is his position and not that of PPBM.

Since PAS clearly made its position clear that there will be no cooperation with PPBM at the Muktamar, one can only suspect that it is Muhyiddin's attempt to entice PAS.

Muhyiddin is basically saying, "Look, I am the most wanted by the people to be Prime Minister despite never being popular in UMNO and won the Deputy President position by riding on Dato Najib's coatail.

"PAS is the most popular political party in the country. Two of us can make beautiful music together".

It is quite a loud message that Muhyiddin is still adamant to work with PAS despite PAS rejecting PPBM due to Tun Mahathir's loud mouth and covorting with sworn enemy PAN and DAP.

Deep inside the heart of an Islam liberal, Mahathir will never agree to traditional Islam of PAS.

This is interesting in the like of PAS Majlis Syura's decision to severe tahaluf siyasi with PKR.