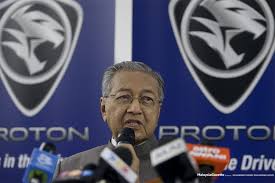 For quite sometime a while, the social media and blogs had revealed Tun Dr Mahathir relative's interest in Proton vendor and alleged the Taiwanese that brought Mitsubishi idea for a Malaysia car, Rin Kin Mei as Mahathir's proxy in Proton.

In TV3 news this evening, Tunku Aziz asked the outright question: Is Mahathir the real owner of Proton?

He posed the question in view of the reaction of Mahathir to Syed Mokhtar's decision to sell 49.9% shares in Proton to Geely.

Mahathir have been "crying" and pretending not to know of the discussion with Geely and earlier, Volkswagen in which he was willing to have them as shareholders. The deal Volkswagen deal did not go through because they insist on majority control.

Apparently, Mahathir agreed on some terms with Geely that would have been worse than the "jual negara" accusation he made against Dato Najib.

He agreed that Geely could come in as shareholder and set-up a factory in China with the condition for China to order 200,000 cars a year.

It has a familiar ring of a China brand car, but built by Malaysian company with protection from Chinese government. But that is just speulation.

By setting up a plant n China, what happen to his nationalist economic idea of creating job in Malaysia and condemning China investment that allegedly brought in labours from China?

There is more questions to Mahathir's emotional or pretending reaction to Geely investment in Proton. Rocky Bru here has few interesting links to various questions.

Among others, Proton caused tax payers RM385 billion albeit it more than the "dreaded" GST. By disagreeing to the deal, is Mahathir out to kill yet another corporate Bumiputera entrepreneur of his creation?

None of the Bumiputera corporate entrrepreneurs remain players today. While, Mahathir's open secret Chinese and Keling proxies continue to flourish under his protection including sabotaging a government initiative called 1MDB.

Unknown said...
This comment has been removed by a blog administrator.
10:42 AM

Charge him. What do we care he is an UMNO leader!?

Posting about Proton. Your comment is out of topic. Have to delete.

385billion. Wow
Having wet dream? Surely that plucked from thin air
But the taxes and everything, calculateable and tangible of nearly some hundreds of billions

Please deny that proton gave the nation hundreds of billions since day 1, and i rest my case. Failure to do so then u might as well keep the shut

U are a blind supporter. Whatever related to mahathir, u gonna go bash till kingdom comes down. Forex exhange loss also want to paint mahathir black, but stupid thing it didnt go as planned. Bnm also tried but again no starter.

Deny that proton brought billions hundreds of them to the government. Or shut up

What's 1MDB got to do with the Proton-Geely deal?

The posting is about Proton.

It hasn't much to show outside of the Malaysian market. Fact.

A pentaksub now calling me a blind supporter. This is a first. Ha ha ha ...

You forgoten we were his supporter and you were sucking our knee cap of everything we wrote including the spin to divert the attack on IPP but never answered it.

As time past by, the more the Mahathir office boys have no answers to allegations against him except to keep quiet and let it passby.

By April 2015, it confirms the suspicion that the old man is a compulsive liar including not disclosing that he was in the negotiations with Geely that you seem to bring down BUT angry that it means your patong berhala was ready to sacrifice Proton workers' job!

Go shoo off and join your diminishing numbered pentaksub. Can't stand the truth could you?

Who the fuck you think you are to tell me to shut up. You wont be able to. But we could can rid of you forever from commenting here. Remember the blog owner calls the shot!

Just how much has Proton consumed in terms of public funds from the time it was set up until now?

Did we get any returns from that expenditure of public funds?

drMpower has a point. Although he could avoid personal denigrations.

The RM385 taxpayer cost question should be directed to the original source, FB Tan Khai Beng. Here you argue did Mahathir himself was involved in jual negra to Geelyow pretend to not agree!

And the pentaksub can argue over the claim Mahathir was willing to sacrifice Proton workers job. THat is really jual negara.

DO not divert to the subject in hand.