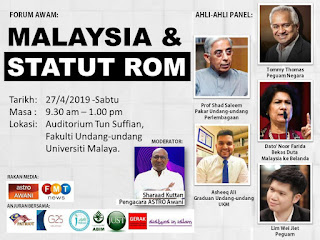 DAP Charles Santiago's grouse with the four "Professor Kangkung" was their warning to the Malay Rulers that as Supreme Commander, the Agong is open to the risk of being prosecuted by the International Criminal Court (ICC).

It is no new material. Tun Dr Mahathir's childish quarrel with TMJ insinuated of a vocal royal opposing Rome Statute for the pleasure of beating people up.

If Tommy Thomas is true at the UM Forum to say no such risk since any military action is a civilian government decision, then Mahathir is laying blame to the Supreme Commander of the Johor Military Force.

As written in earlier postings, the ICERD and Rome Statute issues could have been laid to rest if not for the stubborn Foreign Minister, Dato Saifuddin Abdullah. 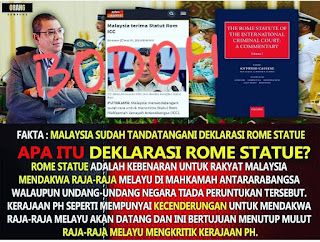 He not only superceded the Prime Minister to sign the statute without his consent, but intend to accede to the Rome Statute by ignoring the announced withdrawal. 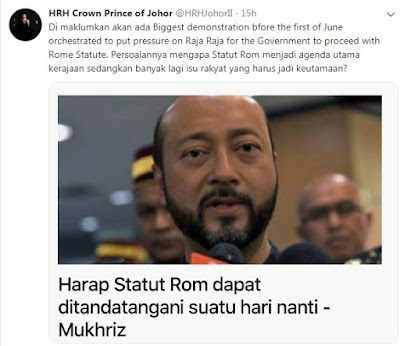 TMJ quoted Dato Mukhriz reported hope for the statute to be ratified eventually. It only exposed Boboi's limited understanding in the workings of international conventions and statutes.

Then one could see the real impact as is happening in Saudi Arabia, where as a party to ICERD, they are required to allow the issuance of liquour and night clubs licenses. There was a big demonstration in Riyadh against it recently.

It will require a Constitutional amendment and its continuity with Malaysia's past history severed by these new neo-colonialist.

The liberal groups are hiding this fact from the public, especially the Malays on the real effect of signing international instruments

Malaysia practises dualism or in other word, it is a dualist state, which separate international and domestic law.

In other words, international statutes and convention will impose their will on our sovereignty.

No tidak apa here even if said by the country's AG or renown immigrant law Prof Shad Saleem Faruqi. It is not these few individuals without any locus standi to represent any constituencies or group of citizens to determine.

So what, Noor Farida?! 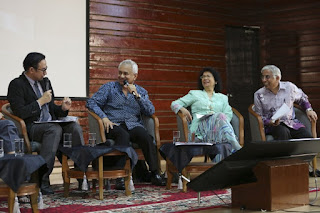 Dato Noor Farida exposed that BN cabinet were looking into ratifying the statute back in 2011 had it not been vehemently opposed by the then AG.

Without going any further, the diplomat, who disastrously failed to defend Pulau Batu Putih, but now promoting immoral "khalwat and zina" under banner of human rights, conveniently witheld the name.

The then AG was Tan Sri Gani Patail, who is now politically siding PH side in the political divide and personally responsible for losing Pulau Batu Putih.

Gani was mistakenly made AG by the then fourth Prime Minister, who happen to claim to be the coumtry's saviour and seventh Prime Minister to correct the wrong initiated by the fourth.

The former Foreign Minister did not carryout the ratification despite according to Noor Faridah, it was agreed by cabinet members and all agencies being seek for feedback.

Believe she is not telling the whole truth.

And, what is the issue if someone spotted something was wrong and PM or cabinet member held back on the ratification for precautionary sake? 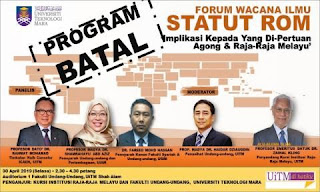 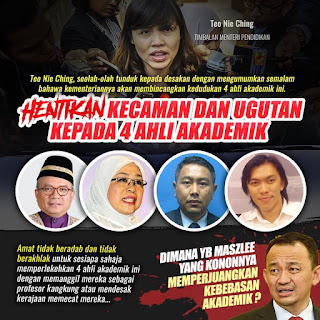 Bear in mind, PH government did worse for reversing a decision within a month after ratifying.

They are now seen as global joke for the inability to carry through a decision or inability to decide appropriately that it warrants an immediate U-turn.

But they could only blame four professors expressing their academic freedon and human right (?) for freedom of speech.


Why is Tommy Thomas, Noor Farida and Prof Shad Faruqi so keen on ratifiying a statute that have been deemed worthless by major superpowers of the world?

There is NO credibility and enforcibility of the statute and ICC as an institution without the membership and commitment of US, China, Russia etc.

Recently, the US openly opposed the ICC, and openly banned and revoke the visas of ICC prosecutors from entering US to carryout the investigation on Afghanistan war atrocities.

Subsequently, the ICC judges were forced to drop the case and prohibited the prosecutors from their pursuit. It demonstrates heavy-handed colonialism and imperialism still strive today.

Unlike the UK which willing conducted their own enquiry on their forces in Iraq, the recent threat by US Secretary of State, Michael Pompeo came with no such commitment.

The US position came about from a statement last year by National Security Adviser, John Bolton. He said, "If the court comes after us, Israel, or other US allies we will not sit quietly."

Israel is not a signatory of the statute.

ICC also had no power to investigate non-member Myanmar for state sponsored genocide of Muslim Rohingya. The only legitimacy it has was the offense of force deportation to member state Bangla Desh.

Again, nothing yet done on Myanmar. Bolton's words made ICC lost the teeth to act.

Philipines withdrew from the ICC in March after Malaysia gave ICC a glimmer of hope  to ratify in early March, but subsequently, did a U turn to wthdrew a month later.

Neighbours Singapore, Thailand, Brunei, and Indonesia are not signatories to the Rome Statutes. So do an important regional power, India.

The issue of the enforceability of ICC have long been questioned. It become apparent that ICC was only capable of pursuing Africans countries that made Gambia, South Africa, and Burundi withdrew.

UK representative recently questioned resources chanelled to an ineffective ICC in  executing its role and gaining support of the international community.


It shows the Malaysian eager beaver of American-funded left wing and liberals are overly excited to conform to the superficial international human rights conventions and statutes like ICERD and Rome Statutes.

Though not yet for 2020, Nikki is a potential US Presidential candidate. It is telling as to where the future lies for the Rome Statute.


Yet these group of minority urban, wayward and elite Malaysians are overzealous to ratify a worthless piece of statute.

such a waste of time. they should focus on bread and butter issues!