Is NST discrediting this blog out of someone's spite? 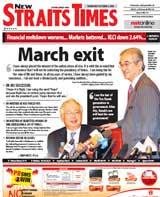 It is simply because the game ain't over. Crooner ain't over singing. He didn't resign yet!

This blog got mentioned today in today's NST at page 6.

I haven't read it yet. But, I was told that this blog together with "millionaire" bloggers, Bigdogdotcom and Dato Ron's Kuda Kepang and the eminent blogger, Chetdet.com was picked for guessing wrong Pak Lah will run for UMNO Presidency.

Am I in the company of greatness?

This is one wrong call I am greatly proud off.

If my scepticism was the turning point for Pak Lah's decision, then when this blogger decide to vanish from blogosphere, my virtual remain will be smiling to my virtual grave to meet the maker with the knwoledge that this unsung anonymous blogger-hero saved the country from the menace of Abdullah & Sons Co. Ltd.

Only I know of that.

Off course, my "sex-deprived-due-to-excessive-blogging-husband" wife definately knows that too.

Anyway, the whole news report will be reproduced at the end of this posting when I could my hand on a copy. No no no ... I am not buying NST. I'll just read it in a nearby mamak shop that do not charge its customers for reading the newspaper.

Why would I waste my hard-earned and saved RM1.20 on such piece of thrash? That RM1.20 a day can partly pay for my monthly Streamyx.

Frankly, I don't quite understand why NST wants to give prominence to this blog of mine seldom criticised for poor English or lacking any flair.

Is it because one journalist, Shamsul Yunos mentioned all of us in his blog yesterday. He mentioned also Dato Ahmad Talib.

Or could it be some Tingkat 4 boys are not comfortable that this blog blown the cover of their operative and decide to C4 this blog's credibility? Maybe Omar Ong whisper whisper to Kamal Khalid and he in-turn called up NST?

I've got wind the latest Siasah will be writing a story on it. Remember Siasah sell more copies than your two-bit tabloid called NSTPee and to the right politically important Malay audience.

Better call up Siasah to buy up the whole issue. Or get win-by-default Ketua Bahagian, Syed Hamid to revoke Siasah's printing license.

Why should the boys be worry about this blog?

If we take all that came out from Pak Lah's mouth for the past 5 years as stupid, the Tingkat 4 boys are not quite clever, are they?

One must understnad they have not had any sleep for the last 48 hours. After a long haul without sleep, the brain stop thinking and merely reacting. 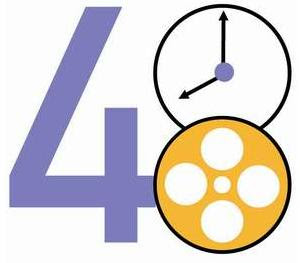 In the last 48 hours, they've been scrambling in the limitted post Hari Raya time to "save Pak Lah's soul".

They brought in Singapore 60s spy-catcher Jefri Zain aka Senator Tan Sri Jins Shamsuddin to get UMNO Bahagian throughout the country to sign a petition to demand the power transition to be reversed back to June 2010.

For their signature, they get a photo op with has-been second rate P Ramlee era actor, Jin Shamsuddin. Reezal Merican and Che Alwi is behind the scene to promise the moon and the star.

Before Hari Raya, Jins with another one Radzi Daud representing two groups of Malay NGOs made a demand to to retain the original power transition. Strange isn't it that NGOs could be making a political stand? 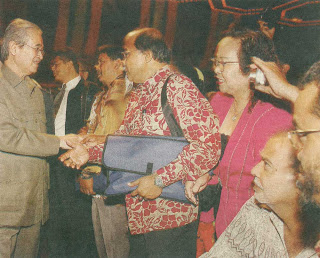 Pak Lah at the Persatuan Penjaja function before Ramadhan
In fact, yesterday, they had Haji Baharin, the crooked conniving conman President of the Persatuan Penjaja and Cuepec Union people demonstrating for Pak Lah and against Najib at the PWTC. There was even one Alumni Kelab-Kelab UMNO Luar Negara participating in the show of support. Jins happened to be an honorary member.

Look at the picture below. Do you think that they could possibly be bouncers from some faction of Pekida? 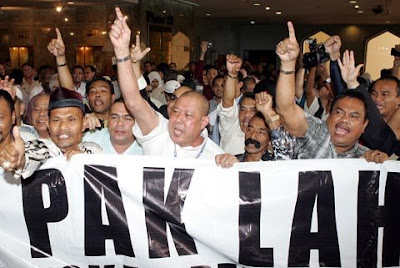 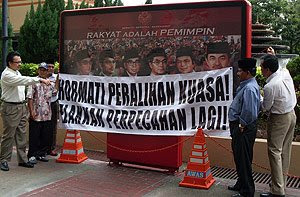 They are all, including Jefri Zain, Pak Lah's network of Sahabat with Biro Tatanegara being the backbone.

Yes, it's Government money being used for covert partisan operation. If you are in tune with me, you would be saying that it is none of their business. Shouldn't they be spending time promoting nation building and explaining Government policies?

Them to me, are one prime reason for the political split amongst Malays. Fortunately, not all BTNers are like Pak Lah's Sahabat. 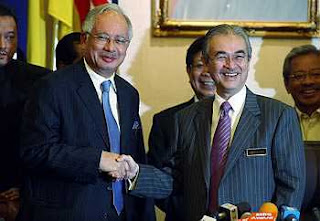 This Sahabat are not keeping quiet. They know they could be obliterated after this.

I hope Najib is not going to be too comfortable and think smily is sincere. Only Musang Hitam thinks he is sincere.

It is rumoured these Sahabat are making a last ditch effort to get the Bahagian to nominate him as President. They are basically doing an "Anwar on Ghaffar" - say one thing but the machinery do another.

If Pak Lah is really sincere about quiting, why the party election shifted to March 2009?

Why was there some 20 people representing Perak, Pulau Pinang and some Kedah Divisions hurdling at Putarajaya till the wee hours of 2 am in the morning? Doesn't the PM need his restful sleep? He has lots of things to do.

Why were there some 30 people otside his home in the early hours in the morning trying to make him flip?

While the Sahabat are working overtime, do not forget of the Disciplinary Committee.

Tengku Rithaudeen suspension of members of Kota Tinggi and Rantau Panjang is not going to be the last. The grapevine is saying some 30 Divisions are in trouble and that could deny a lot of Najib and Ku Li's followers at the Division.

Pak Lah reiterate his mission that he will pursue to combat corruption.

Rest assure there will be many head falling for even misuing office phones. But there won't be any investigation for the kain pelikat gift by JASA. Definately not on Khairy and Kamaluddin.

Many of Khairy's age-expired people are running for post at the Division level. Do you expect them to support Najib? Or Mukhriz/Khir Toyo over Khairy?

Muhyiddin, Dr Rais Yatim and few are widely said to be removed. Mat Taib, and Dr Mashitah won't join those with a past and record against the party like Zaid Ibrahim.

The grapevine is now talking of Zahid wants to cop out from taking on Muhyiddin, but Pak Lah insist.

As it is, Ali Rustam and Muhammad Muhammad Taib has not withdrawn. There would be a serious attempt to kill-off Muhyiddin.

Muhyiddin could be martyred. Tan Sri will be making an announcement after Najib made his today.

Remember the saying, the game isn't over till the fat lady sing?

Remember crooner ain't over singing yet. He has not resigned and still captaining the Titanic.

Six months is a millenium in politics. Perjuangan belum selesai.

KUALA LUMPUR: It is open season, not only for those offering themselves to contest the Umno elections in March.

Bloggers also jumped on the bandwagon to be the first to report, or speculate, on what Datuk Seri Abdullah Ahmad Badawi would announce at the Barisan Nasional supreme council meeting yesterday.

News website Malaysiakini, for example, quoted the Kuda Kepang blog as saying that Abdullah would defend his post.

He claimed that Abdullah decided to defend his post after a three-hour meeting with his supporters that dragged into the wee hours.

An “influential Umno insider”, however, told Malaysiakini that the meeting was just a “casual meeting”.

“He has made up his mind. He will step down. I don’t think Abdullah decided this morning that he would defend his post,” it quoted the insider.

The Patriot, a blog by Pulai Umno division vice-chief Tengku Putra Haron Aminurrashid Tengku Hamid Jumat, hedged his bets by giving three courses of action that Abdullah might take — deciding against defending his post, contesting the party presidency and contesting but handing over the premiership to his deputy, Datuk Seri Najib Razak, in March.

Another Brick in the Wall and Big Dog’s The Thirteen Million Plus Guy Rambles reported that Abdullah was going to defend his post based on information they received on meetings held at the prime minister’s official residence prior to the BN supreme council meeting.

Even former prime minister Tun Dr Mahathir Mohamad was unsure whether Abdullah would make the announcement of not contesting the party’s presidency.

“I have this suspicion that he will not. If he does not, it would not be surprising. He is not a man of his word,” he wrote in his blog.

Abdullah has proven him and many others wrong.

Statement from Musa Hitam, the failed Adviser of the failed PM, in an SMS received from a reliable source:

You're right though. He didn't resign and five months is a long, long time in politics.