Anwar and RPK should help save Sirul and Azrilah 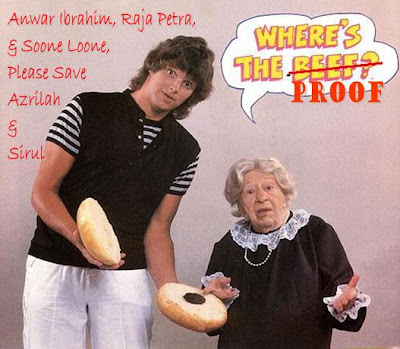 A call for help by a commentator, sincerely below:

RAJA PETRA MUST SAVE SIRUL AND AZILAH!!!

Raja Petra Kamarudin, Anwar Ibrahim and others said at one time or another that they have proof that others were involved in the murder of Altantuya.

Otherwise these two innocent Policemen will hang for nothing.

So since Raja Petra and Anwar say they have proof that others were involved in the murder of Altantuya, please bring the proofs out now. Azilah and Sirul will appreciate it very much.

For a recap of the event, read the following AFP report:

Malaysian policemen to hang for murder

KUALA LUMPUR (AFP) - - Two Malaysian policeman were sentenced to death Thursday for the murder of Mongolian woman Altantuya Shaariibuu, in a sensational case the opposition has tried to link with new premier Najib Razak.

Abdul Razak Baginda, a close associate of Najib who was sworn in as prime minister last week, had been accused of ordering police to kill his former lover after she came to his family home to harass him for money.

But last year he was acquitted of abetting the 2006 slaying of the 28-year-old model and interpreter -- a case which, with its ingredients of sex, politics and violence, has captivated the nation.

Altantuya's body was blown up with military-grade explosives in a jungle clearing, leaving only shattered bone fragments as evidence.

The two officers found guilty of the murder, Chief Inspector Azilah Hadri and Corporal Sirul Azhar Umar, are from an elite unit that guards the prime minister and deputy prime minister.

"Each of them are blaming the other, they failed to raise reasonable doubt against the prosecution's case. I convict both of you as charged," said Shah Alam High Court judge Zaki Mohamad Yasin.

"I sentence both of you to death. You will be taken to a place of execution where you will be hanged by your neck until you are dead," he said.

The pair looked calm when the sentence was handed down, and then stepped out of the dock and hugged their lawyers, who later said they would file an appeal.

"We expected him to be acquitted but the judge has made the decision. We will wait for the next stage," she told reporters. "I really want to marry him, I have been waiting for so long since 2006."

Malaysia's top blogger Raja Petra Kamaruddin has been charged with sedition after repeatedly linked Najib and his wife to the murder on his popular website Malaysia Today.

Najib has vehemently denied any involvement in the killing and said he never even met Altantuya, but despite any evidence linking him to the case, the allegations persist and the opposition has called for an official inquiry.

Karpal Singh, an opposition politician and leading lawyer who is representing Altantuya's family, said the verdict left many questions unanswered.

"These two have no motive, they didn't even know her before."

Altantuya's father Setev Shaariibuu was distraught over the acquittal last year, in a case seen as a test of the strength of Malaysia's much-criticised judiciary.

"I am not satisfied. My daughter knows only one Malaysian and it is Razak Baginda. Now my daughter is dead and Baginda is freed... the country has lost credibility in the world," he told reporters at the time.

Sincerely hope Anwar, who confidently expressed believe of manipulation by higher hands, to come forward to help this two supposedly innocent rakyat, whose life will end at the gallow.
at 4/10/2009 10:00:00 PM

I agree with you. Its not fair for their lives to end just like that in the sake of carrying out duties as ordered.

You are damn right. If they do not have the balls to do so, then they should tell their dogs to stop barking at the wrong hills.

I have proposed the SAF (Save Azirul Fund) so these 2 "victims" can have justice.
It is important that the person who gave the orders is brought to accountability.
Hopefully, Pakatan will not let the matter go to sleep.

When PAS won Trengganu they claim they have a 'lori' of proof/evidence of BN Trengganu corruption practice. Then during Anwar fall out with DR M this Ezam (anwar blue eyed boy) claim they also have hundres of boxes of DR M and his cronies corruption practices. Then when PR won the 5 states they also follow suits claiming having evidence of BN corrupt practices. In between came along a beutiful girl name Al tantunta Sharibu. When she was 'murdered' , days after Sirul/Azilah was detained, they calim they have solid i repeat solid evidence of Najib Razak and his beloved wife Rosmah (although I dislike on her 'perangai' that I believed she can change to capture our heart by just do a simle plan, follow the steps of Tun Dr Asmah wife of Dr M) plus the legendary RPK box office statutory declarations,blog and stories until now where is the solid evidence?. And the rakyat still believed them. Why? It so juicy right.!. Malays was well known for believing a person is already guilty before being judge. Ngumpat, khabar angin are their main meals. Just say someting bad about a desent person and there you go, the whole kampung will get after you. This is what Anwar, RPK, Nik Aziz and even DAP are aware and that is their main weapon. UMNO and BN what they do, they made thing worst!

When their life is on the line, I believe many people are willing to expose anything they know, especially if he claimed to be "kambing hitam".

Azhar and Sirul wont be hanged. They will be given a new identiry and new face to live a new life and need not work for the rest of their life. It is all in the plan. Remember PI Bala? He isn't complaining either.

You are bloody right!

Anwar "Drama King" Ibrahim and Raja Petra Kamaruddin have moral obligation to come forward and ensure, through the due process that CI Azilah and Corp Sirul are NOT REAL CULPRIT.

They should be heard in court and their testimony on stand under oath should incriminate the REAL CULPRIT!

The failure to do so on stand under oath cannot be construed any less than them being INCURABLE COMPULSIVE LIARS!

I don't think RPK or Anwar can prove their innocence as no one doubts they were the ones who executed Altantuya. This is clear from the caution statement. For that, they should hang.

What needs to be answered is why they did it and who ordered it. The prosecution and defence counsels have not pursued the "motive" of the crime. Which of course makes Malaysians cynical.

They don't even need new faces. All they need to do is walk around without jackets over their heads; nobody will recognise them as the two dudes from the trial.