Will Nizar needs Ngeh's permission to speak in Parliament? 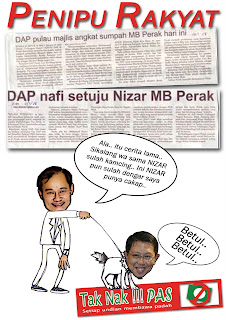 Masterdedah-prepared poster for Bukit Gantang
UMNO should deal with all the issues and let the people decide.

Sentiment is wavering against the Pakatan Rakyat brand of wayang politics. Speak the truth to the rakyat, particlarly the majority Malays and they will rationally decide.

The rakyat must be made known of the truth behind the empty rhetorics of Nizar-led Perak Government. The Batu Gantang seat is a contest between UMNO and DAP with Nizar and PAS being made aas DAP's puppet to serve their chauvanistic greed and ego.

Let the proof present itself.

In the first place, a ban was not necessary for a warning should have been sufficient to avoid subjudice and seditious words on his Majesty. Just be firm when any offense was made. That means not a one night ISA detention and stupid excuse such as protection.

Syed Hamid should not have banned any mention of Altantunya and Sultan Perak for the tri-election. From last night's trip visit to Pekan Bukit Gantang's campaign, both side PAS and UMNO did not totally heed the ban. Lets face up to the need to make known to the rakyat the issue at stake.

Is this another desperate and selfish attempt, to add to the banning of Suara Keadilan and Harakah before the UMNO General Assembly, to maintain Syed Hamid's relevance in the new cabinet?

Coupled with plans by GMP to bring the PPSMI issue to Bukit Gantang, these are issues that is detouring the campaign from what it is really all about. Oppositions are using PPSMI issue merely to deny UMNO's ideological leaning to Malay Nationalism.

As far as Nizar, he is a lost cause and had blew the trust the Sultan had bestowed to select him as Menteri Besar. He was weak in exerting his authority and allowed his exco members to step over his head. As a Malay MB, he betrayed the expectationof the Malays upon him.

For the endless conjuring of excuse by Pakatan Rakyat politicians, the Sultan did not contravene with any State or Federal Constitution to refuse the dissolution of the State Assembly and select another MB. Pakatan Rakyat lost their majority and power has shifted.

The rest is procedure and the court will prove it.

Subsequent to the 2008 General election, Barisan Nasional with 28 seats (27 UMNO and 1 MCA) did not have sufficient majority to rule the state.

After much to and fro from palace, Nizar came to power following an agreement dubbed by PAS own people as Perjanjian Pangkor II. PAS with only 6 seats made a pact with 18 seat DAP for the MB post to be held by Nizar and DAP held the position of Speaker, Deputy Speaker and six state exco positions. PKR held 3 and PAS held 2 more Exco posts.

That arrangement did not go down well with even the PKR Deputy President, Syed Husin who felt it should reflect proportionately the almost 60% majority Malay population. Out of the 10 exco position, there was only 4 Malays. 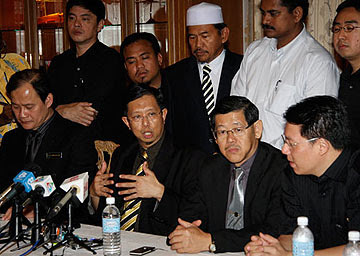 Nizar could not hold his own as he was caught in his own political rhetorics. The one calling the shot was senior exco member, Datuk Ngeh Koo Ham and his cousin Nga. The Ngeh and Nga duo was imposing their wills on the exco much to the chagrin of the Malay exco members.

With Nizar succumbing to Ngeh and Nga, the 7 non-Malay exco members holding more critical posts passed at will policies and approvals to the detriment of Malay interests.

The most known is the ridiculous 999 years land title to Communist collaborators living at the Chinese New Village. This had received the disgust of the Royal Highness the Sultan of Perak. PAS Mustafa Ali himself disagreed with the decision. It was later known that Nizar had defied the Sultan's request for 60 year title.

It is widely spoken in Perak of the duo approving prime log concessions to their cronies.

The response to disagreements by the two cousins related to Chin Peng are usually rude. It is claimed that the two would brush aside and bully any opposition by Malay exco members by embarassing their academic qualification, and professional background.

It came to the point that in answering supplementary questions in the State Assembly, which is to be answered only by the Menteri Besar, Nizar had to constantly refer to Ngeh before answering. At times, Nger himself attempted to answer the questions.

Ngeh influence over Nizar was so obvious that in any press conference where he is present, Nizar's body language would be seen constantly swaying towards Ngeh for approval. Will Nizar have the luxury of getting whisper of advise and approval from Ngeh in Parliament?

Should the people of Bukit Gantang be allowed to be represented by someone who failed to defend and protect their interest?
at 4/01/2009 07:30:00 PM

just look south, it has happened

Just because a bunch a Malays is working with a bunch of Chinese without the 'shut the f;'; up you Cina/India shit, I am Melayu with 'special powers' UMNO style, does not make the Malays stooges of the Chinese or Indians. Here you UMNO bas,.,., conveniently forget that the DAP also has many Indian members so as to make it a Malay Chinese clash. This is the racist shit which you want to create so as to be able to use your 'ketuanan UMNO' shit on the non-Malays as threats to make them pliable. Typical UMNO bas;';';, that's all I can say.

Yes bro, all this while Nizar has been a puppet to DAP! Dunno what to say if the Bkt Gantang malays still vote for him...

"Communist collaborators"? Wow, I thought that position was already so passe more than 20 years ago? What you been puffing bro?

Fren,
I dont care whatever u said..cause i still vote for Nizar for the future of Malaysia that i want my grandchildren to be. Free and fairness to all. Siapa kerja kuat, siapa rajin dan siapa kuat beribadat...merekalah yang akan mendapat keuntungan, insyaallah.

Pas is a traitor to the Malays. They can made a pact with UMNO for the Malays and Islam sake but they choose who they called as Kafir Habri to made the pact and rule Perak. May Allah forgive them.
PS You sure the Nga' or 'Nganga and ternganga' are Chin Peng relatives?

From what I had read, recently Pakatan issued out land title dan bukan disebaliknya. So what the issue? As a Perakian I will say Nizar has done a good job, but Zambry have not shown his "kebolehan" yet. His latest comment on Nizar not putting MB as kerjaya not very smart.

I wonder, why is it in Malaysia, political parties make so much effort to discredit their opponents as if they can only look good if the opponents look bad.

Why not just stand on their own two feet and let the people see and place value base on their strength, and not in comparison to the opponents weaknesses.

And is this what is happening in Kedah?

While its a national history that 15 candidates are vying for the coveted Kedah state exco seat, many hypothesis had alluded to its phenomena.

Let’s look at the independent candidates and their background:

1)ANUAR B HAMID - An ex-Armed Forces major (retired), an UMNO member of Sungai Air Mendidih branch in Merbok division, frustrated with Umno after Dr. Mahathir left the party sulking. He was also responsible for closing down the Sungai Air Mendidih Umno’s Hall.

3)KHAMIS B AWANG - An UMNO member of Sungai Layar branch in Sungai Petani.

Member: A Member, at the time of his advancement or election to this grade, shall have satisfied the Council that he has attained such standard as set by the Council to testify to his proficiency as a professional engineer, and that he is worthy of election in accordance with the relevant Bylaws and Regulations.