A rising hope at Bukit Gantang 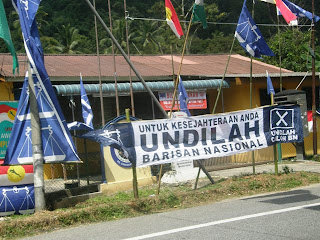 An opposition politician on her return from Sarawak confided with the passenger next to her that Batang Ai will go to BN. Anwar's much hope of an attack on Sarawak to buid up for this year's expected state election may not materialise.

She said situation in Bukit Selambau is rather mixed and Bukit Gantang would be a better hope.

Her expectation may not turn out so. By this weekend, the direction of Bukit Selambau may turn towards Barisan Nasional. While in Bukit Gantang, the Chinese vote indicate a swing back to Barisan Nasional.

There are several reasons to believe for the swing back to BN. The crucial non-Malay voters that had cost Barisan Nasional in the last General Election will return support to BN now.

The Malay votes is likely to favour BN as Nizar's antic to losing majority in the State Assemby and lost of his MB post may not go well with the Malay voters. Their questioning of the King's prerogative would cost them dearly.

The character attack campaign by PAS, and slogans associating Islam and vote for PAS may indicate they are running out of issues and losing grip. UMNO's rally in the rural part of Bukit Gantang are attracting huge crowds and in one night Anwar had to cancel his ceramah.

The belief that the Chinese are looking at the by-election as a referendum for a fresh state election may not be that significant.

Their concern is economics and they do not believe giving further support to Nizar would serve their economic concern. They would like to see the leadership focus on the economic problems of the country.

After a year of endless politicking since the 12th General Election on March 8th last year, fatique has set in. They are willing to give our newly installed PM, Dato Seri Najib a chance.

The presence of some 5,000 at a dinner in Taiping on Friday night despite the heavy downpour is a testament to that swing.

BN have touch base with the community leaders and they have given the nod. They expressed their resentment towards Dato Kayveas, although he wasn't the candidate, in the last General Election.

During that dinner, the commitment by the newly elected UMNO Deputy President, Tan Sri Muhyiddin's to assist the voters grouses, which is primarily related to civil servants, should go well.

Najib's gesture to release 13 ISA detainees and the lift of the ban on Suara Keadilan and Harakah will begin to set in. His 1Malaysia slogan is giving a renew sense of a nation. Maybe not a new broom but much hope.

The icing on the cake for BN's campaign in Bukit Gantang is expected on Monday when Tun Dr Mahathir makes a visit. Words are he will submit his UMNO application form today.

This will certainly be a good start for Najib, whose Premiership will have to face up to more challenges than faced by his father, the late Tun Abdul Razak.
at 4/04/2009 11:00:00 AM

A deadly ‘distract and go for the kill’ campaign by Najib

It could be late by now, but we should all be made aware of a potentially deadly campaign by Najib brewing behind the scene, much of the campaign has already been executed with success.

It is a campaign planned with such precision and minute details that I compare it to what Mahathir has done during the fall-out crisis with Anwar in 1998. Furthermore, the campaign has one distinctive characteristic: it is robust to cope with the expected, as it has turned out that along the way many unexpected events have happened but the campaign cope with them well.

It all started with the coup d’état in Perak in Feb. Najib gang swung into action to grab the power of the state. After the infamous ’second visit to the palace’, where many quarters have speculated as the return trip for either deal making or arm-twisting by Najib, the fate of the PR state government duely elected by the rakyat was sealed, when the Sultan decided to take side of Najib.

Then came the fateful events that vacated the Parlimen seat of Bukit Gantang and the state seat of Bukit Selambau. The by-elections are clearly tough battles for Najib and could be fatal to the imminent power transition to Najib slated for April. Much earlier on, UMNO general assembly was already scheduled for Mar 24-28. The factional fights for positions were expected to be divisive and chaotic for the party. The two potential deadly blows from the ‘Two Bukits’ cannot come before or around then.

That is where the campaign made the Election Commission did the job: fixing the nomination day for the by-elections to be one day exactly after the UMNO general assembly, and the polling day on Apr 7.

Most of us did not take Apr 7 with much meaning, except it is a weekday. But it is so significant with what the subservient EC has done:

A weekday of course will reduce turn-out, usually affecting outstation voters who are commonly known to be anti BN.

The weekend immediately before Apr 7 is the Cheng Ming weekend for Chinese. Also known as Tomb Sweeping Day or Qingming Festival, most Chinese would travel back to their hometown to pay their respect to their elders who have passed on. Apr 7 being a Tueday, Chinese voters of the Two Bukits, commonly recognised to be anti BN too, are unlikely to extend their stay all the way. Hence reducing opposition votes further.
Most important of all, the campaigning period, from Mar 29 to Apr 6, covers a very important event: the power transition from Abdullah to Najib. The opposition and most of concerned Malaysians would be so occupied by the campaign that any resistence to the transition is kept at very low level. This is the largest distraction to us all for Najib to go for his first kill.
Along the process, the unexpected also happened in Sarawak, that led to the by-election of Batang Ai. The subsevient EC again did what the campaign needed: include Batang Ai with the same by-election schedule. Two potential deadly blows are no difference from three potential deadly blows, but Batang Ai, far from the tsunamic Peninsula Malaysia and with a different voter composition, could offer a potential consolation to the BN to reduce the impact of the Two Bukits. How convenient the EC to oblige.

At Bukit Selambau, the record number of independent candidates puzzled all of us. By now, we have the answer. And need I say anything else but it’s part of the campaign?

Then on the judiciary side, where many high-profile cases related to Perak are in progress, the campaign has again planned and executes its steps carefully. First on Mar 23, the Federal Court returned the case of Nizar vs. Zambry to KL High Court, much to people’s surprise. Two new judges were parachuted into the KL High Court. The original High Court judge, Justice Lau Bee Lan, who is well respected in the legal fraternity, is not assigned for the case that she has been so familiar with. Instead, a new judge, Justice Abdul Aziz Abdul Rahim, on his first day at KL High Court after being transferred from Kuching High Court, is given the case. He shiftly decided that the first action is to decide if leave should be granted for the case to proceed. So today at 3pm, the decision will be made. It will be no surprise that the decision will be a rejection of leave, therefore summarily deal a blow to the case brought by Nizar.

The significance is the timing. While any decision at the KL High Court can be appealed, so all is not lost for Nizar as far as the case is concerned, but it immediately adds to the perceived ‘legitimacy’ of Zambry as an installed (vs. an elected) menteri besar, which BN has been fighting very hard in facing the rakyat. The timing will be fatal to Nizar, who is the PAS candidate of Bukit Gantang by-election. “The court has decided no case for Nizar” will ring loud all over the sky of Bukit Gantang, seriously hurting Nizar’s image.

Then there is another new judge, Justice Balia Yusof Wahi, being parachuted on the case of Perak Speaker with the three ‘frog’ state assembly representatives. He is a High Court civil division judge who had been brought specifically from Kuala Lumpur to hear the case in Ipoh. According to Edmund Bon, the lawyer of Sivakumar, “(we) were not informed of the change until the very last minute… no reason was given for the change.”.

So by now, Najib is already sworn in peacefully at Istana Negara as the sixth prime minister of Malaysia, despite his tainted character and baggae of unresolved scandals. Tomorrow, the critical by-election weekend, he will surely go to the various places giving his speeched as the newly minted prime minister. Carrying with him are all those advantages described above that his campaign has already engineered and bagged. His final kill will be the collapse of opposition campaign for the by-elections and the surprises beyond imagination on the night of Apr 7.