Anwar and his lawsuits, Will he actually sue Anifah Aman? 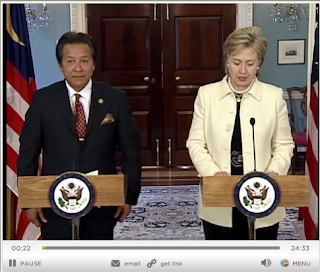 During his visit to Washington, newly appointed Foreign Minister, Dato Anifah Aman spilled the bean on Anwar to reveal his offer of Deputy PrimeMinistership to Anifah if he jump ship.

[Watch the press conference in full here. Thats the prime intention of this posting.]

PKR had promised the position DPM for Sabah in their 2008 Election Manifesto for Sabah, but that revelation embarassed Brader Anwar Bin Ibrahim tremendously.

He predictably threatened lawsuit against Anifah. Sankaran Nair who represented Brader was to submit a letter of demand to Anifah. He claimed Anifah's remark implied his client as below:

The list was taken from Shamsul Yunos's blog here.

Please don't laugh even if we know he is all that. Don't want to anger the nincompoop die hard supporters of Anwar, who would believe to all of Sankaran's disclaimers.

Anifah's response was to go ahead and sue. We await Anwar to file a lawsuit against Anifah. There have been many occasions where Anwar threaten lawsuits but have yet to file a single paper.

One should wonder why he is reacting in such manner. Other's like YB Dr Puad Zarkashi and YB Dato Malek have made the same revelations of Anwar's aggresive attempt to entice BN MPs to jump ship to Pakatan for 916. Why only Anifah?

My gut feel is he is really concerned with his image to the American public, where which "he seeks his for further instructions" from. As blogger Shamsul Yunos described here, he is pissed becasue "Anifah had the gall to tell Anwar's American friends that he is a corrupt politician who horsetrade jobs for loyalty, just like Illinois Governor Blagoyevich."

In the New Yorker magazine interview with Brader Anwar here, he painted a bad image of the country to the point of not telling the truth. What a lie to label UMNO as perpetuating Islamic "fundamentalism" (neo-con definition)? Is it not Anwar that used to pursue this and PAS is forever pursuing it? Then there is YB Zulkifli Nordin of PKR.

The real truth is Brader Anwar is a plane jane irresponsible politician who is not concern for the well being of the people and country but consumed only to acquire power.

Anifah hit it by the nail.

In the meanwhile, Anwar will be on trial for sodomy charges on July 1st. Rumour on the blogophere is he is going to Washington on June 25th. Don't tell me it is another run-for-my-life wayang similar to his stunt to run for the Turkish embassy.

In the Utusan today, it is reported that he will be in the court on July 30th for his appeal on his sacking 11 years ago by Tun Mahathir. How power crazy nut case can he be?

The argument for the case is basically there was no royal blessing to do so, since he claim he is appointed by the Agong. But than what about Nizar? Isn't he appointed by the Sultan? Why is he then supporting Nizar and driving them to fight the authority of the Sultan?

What happenned to Negara Islam and "rising tide of Islam" said more than 30 years ago witnessed by yours truly at several places, when in my teens?

Whether it is the one on July 30th or Anifah's lawsuit, it will be his oppurtunity to seen in public should his four alibi found lying, he be found guilty, and sent back home to Sungai Buloh.

Of course there'll be a lawsuit, how else would the PR make money, other than lawsuit against politicians, the press, the government and perhaps in the near future... bloggers? Another important question, can we make money through by- elections as well? About Reformasi II, keep your fingers crossed, it's coming soon. Expect a lot of hoo-has.

"We are still waiting from Anwar just like his many other threat of lawsuits that have yet to file a single paper."


You are on the Dark Side Of The Moon.
Put your money where your mouth is and substantiate what you have written-"yet to file a single paper".

Please have some respect for your parents who MUST have told you not to lie.

Anifah won't claim something out of the blue right?

I truly believe him..may be he did keep the tape like Linggam tape on Anwar's offer..or he has some other hardcopy documents?

He won't make claim out of the blue right?

lawsuits had become something of a games and taking matter to the court look like you had some kind of status that you know about the law.
when judgement are made that does not favour them ,that judgement is wrong ,the presiding judge had been bought or can be bought.
why go to court anyway if you dont belive in it.