RPK revealed his informer, but does such person exist? 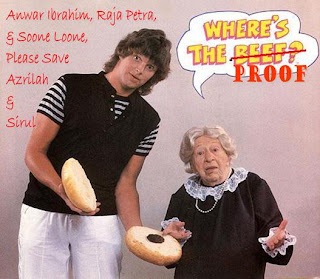 Finally, Raja Petra revealed his 'reliably informed' source of information as Lt Kol Azmi Zainal Abidin. This Lt Col is the source of RPK's controversial Statutory Declaration which pinned the accusation on the murder of Altantunya to Rosmah.

According to his "reliably informed" source, Rosmah was present with allegedly a C4 expert then Lt Col Aziz Buyong and her ADC and wife to then Lt Col Aziz, Norhayati. Both have since made statutory declarations to deny such allegations, thus returning the burden of proof lies with Raja Petra.

In his latest No Holds Barred column entitled The Mystery of the Missing Confession here or here, RPK disclosed part of his interrogation with the Special Branch during his detention under ISA in September last year.

RPK revealed Lt Kol Azmi as number two man in the Special Branch of the Millitary Intelligence. He also claimed that his MCKK collegian, Dato Nik Azmi Nik Daud or popularly known as Bull encouraged him to do the Statutory Declaration based on this Lt Kol Azmi's information. Bull is a long time Tengku Razaleigh supporter.

RPK claimed he had asked another Ku Li staff, John Pang to double check with Ku Li of the reliability of Lt Kol Azmi. He requested the same from Din Merican with Anwar Ibrahim.

Another name revealed is Dato Dr Jamaluddin Jarjis or popularly known as JJ. RPK claimed to have met JJ at a stall of Jalan Ipoh and was offered money by him to stop implicating Altantunya with Najib. A 'friend' checked with JJ and he has denied meeting RPK after he has stop associating with Tun Mahathir.

Rocky had reported John Pang's denial. I could dig up for Din Merican's old business card and try to verify with him. So is in the case of Bull.

Balasundram could be a story for RPK to work on. But as far as the court is concern, he comitted perjury and his words have no value. Lets give this one person in favour if RPK.

We are left for confirmation from Niz Azmi, Din Merican, Ku Li and Anwar Ibrahim. If John Pang denied, I would expect the same with Nik Azmi and Ku Li. Din and Anwar has a tendency to do their "PKR thing". Readers either believe or not.

However, all these people's testament will not be as important as the most crucial person i.e. the Lt Kol Azmi claimed to be from the millitary outfit Anggota Tentera Cawangan Khas (ATCK).

My initial check with 'a friend' is that there is non-existence of a Lt Col Azmi. You are entitled to refute because I am not revealing my source. But I'll tell you why Lt Col Azmi may not exist. Simply because the person RPK claimed holding such post is a different person.

[I did not bother to ask the names of the position holders. Ignorance is bliss here. Or maybe I know the names?]

Is RPK still hiding his real source of information? Or he is fabricating a story? Or he had been duped into believing information supplied by a person claiming to be Lt Col Azmi?

I hope he is not doing any wayang becasue the life of two policemen's is at stake.

RPK is a fiction manufacturer

She drives a car to office with a big Police logo and seems the husband is always gone for weeks on secret OPERASI.

Eight months later she discovered this husband is actually a father of 5 (that's his OPERASI, balik rumah isteri tua beminggu2)

RPK.. another anak wayang that being a pawn for Anwar.. I already read Bro's Rocky article.. Yes he did said

"I happen to know John Pang, one of the characters who starred in RPK's latest piece. Told him about the article and the role he was supposed to have played in making RPK believe this person."

"John, who was abroad, said he was shocked. "The King of drama does it again", was the SMS that I received from John."

Then You also claimed that this col, is not exist..

There they go.. Another make up sci-fi thriller genre story from Anwar and the gang.. They sure good to create this kind of story.. Clap to them!!!

About two life that involved in this case.. I am have no comment..

Anyway.. Nice Article.. Love to read them.. Keep up revealing the truth and untruth..

ATCK -officially known as 92 ATCK- is one of the intelligence unit in the army, together with 165 MIB, 91 Rej Khas Perisikan Tempur and BSPP.

The fact about St Bull is true, but whether the story about him urging RPK to make the SD is still uncertain. But knowing Pete, I really think he's delusional nowadays. Wonder why...

RPK is fast becoming Raja Penglipurlara Kebangsaan. He should be a film Director just like Kickdefella

A compulsive liar knows no boundary...

I think you must dig deeper to find out the truth. Lt Kol Azmi might now be a full Kol... he might also be in other department... who knows... this blog says he exist http://rights2write.wordpress.com/2009/05/06/rpk-spins-again/

1. What is your take on MalaysiaKini and TheMalaysiaInsider writings in regards to Tun Dr Mahathir latest speech ?

3. If you see the video in YouTube, Tun Dr Mahathir NEVER mentioned or gave any hint that he agreed that Sultan cannot remove MB.

5. This is NOT THE FIRST TIME they have been doing. They are trying to laga-lagakan Tun with Najib and UMNO.

reymond grey said...
This comment has been removed by a blog administrator.
9:47 AM

I see you being too personal with Rocky and it has ntg to do w the RPK issue.

Do it elsewhere, but not here.

And I am not joking!

I think RPK had succeded in....creating doubts in peoples's mind. I think that's all he is intrested in....
People had been telling me..so and so was involved in the murder of Altantuya. My argument is simple...
You saw that so and so doing it??
If not, then , why " mahu tanggung buat dosa fitnah orang...?? " Dosa lama - lama pun belum habis, lagi mahu tambah dosa baru fitnah orang.

Blog head,please read RPK article again and again. You will understand that the person supporting RPK is in a very position in Government. Only time is not correct at this time. Moving in now will create much more Chaos. RPK flew out of this country via a private jet. Check the number of private jet owners in Malaysia.