Manchester United were crowned champions of England for a record-equalling 18th time at Old Trafford after a goalless draw with Arsenal ensured Liverpool cannot now catch their north-west rivals.

Sir Alex Ferguson's side might not have given Usain Bolt a goal to celebrate on his first visit to the Theatre of Dreams but the Premier League trophy will do as consolation.

After over three decades as the unquestioned kings of English football, the Merseysiders now have someone else to share the title with.

And, if Ferguson is to be believed it will not be long before the Anfield outfit lose it altogether. 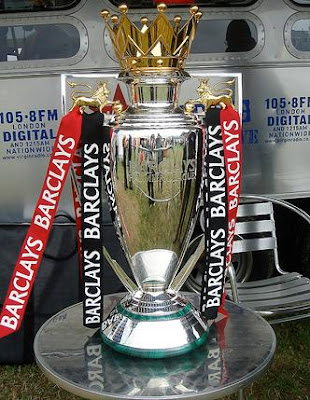 While the first half ended with United still on course for the 11th league title of Ferguson's illustrious reign, Arsenal had every reason to be pleased with themselves.

After two dire displays that surrendered their Champions League semi-final with the Red Devils, plus a hammering on home soil by Chelsea, it was feared the Gunners would suffer yet another embarrassing mauling.

It surely could not be a coincidence that Andrey Arshavin's return from a combination of being cup-tied and contracting a flu bug coincided with Arsenal's return to form.

As Gunners fans search for reasons to be cheerful ahead of what will be another trophyless summer, the Russian playmaker is the main one.

Arshavin went on one mazy dribble from the left flank that would have opened United up totally had Jonny Evans not raced across to clear.

The former Zenit St Petersburg star was also the provider of a cross lone striker Robin van Persie might easily have steered into the net, rather than just over.

However, the world's fastest man did not come to Old Trafford to watch Arsenal.

The hosts certainly started as if they meant business with Darren Fletcher almost sending Cristiano Ronaldo through inside the opening minute.

Yet, as time wore on, it seemed Ferguson's side were adopting a pragmatic approach to the situation, ensuring their goal was tight and secure, pushing forward in numbers only when really necessary.

The energy of Carlos Tevez helped in that regard. Sometimes it seems the South American is doing the work of two men.

And, as the speculation over Tevez's future rumbles on, there is little doubt most United fans would want him signed permanently if at all possible.

It seems highly improbable though. And when he responded to his number 32 being flashed up as the man to be replaced by Park Ji-sung, the response, a little shake of the head and a two-handed wave to all four corners of the stadium, looked for all the world like a goodbye.

There has, of course, never been any discussion over Wayne Rooney.

Had voting for the various player of the year awards been based on the last two or three months' form alone, Rooney would have been top of the pile.

The England striker has added an extra level of consistency to his game that truly deserves him now to be ranked if not at the very top of the game, then only just underneath.

Rooney stole in behind Bacary Sagna to head a teasing Michael Carrick cross wide after earlier having an effort deflected away by Kolo Toure.

On the brink of his 11th championship, Ryan Giggs curled a free-kick over and was then off target with a volley.

Ronaldo had an even better opportunity at the start of the second period after Tevez had failed to manage a shot after Carrick had supplied the cross, but did enough to nudge it into the Portugal superstar's path.

After offering his own sprinting guidance yesterday, Bolt must have thought Ronaldo would offer a fitting payment. Instead, he leant back and skied his shot into the Stretford End.

In fairness, Bolt had chosen to come and watch his team on a rare day that they did not need to win.

For all the side issues surrounding Park's arrival, it suggested even less of an emphasis on attack, although Ronaldo did send one his trademark free-kicks whipping wide.

It marked the end of United's attacking intent.

What happen to City?

Years before the hard-on that lead to the tadpole in the spermazoa reaching the egg and subsequently became baby KJ, I was already a UK-based MU FAN Club member.

At least for a year.

The next year, savings in my tabung buluh was deposited in the BSN.

Should he be rooting for Oxford United or City? Glory seeker?

Next on the list, Champions League. Glad we are on the same side!