The Royal Rebuke: Comments and Pictures 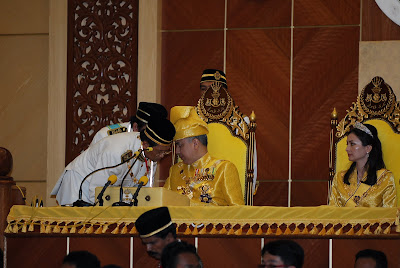 Raja Nazrin stern eyes looking as he speak to Nizar and ever by his side puppetmaster, Ngeh Koo Ham
The NST report interspersed with comments and pictures of the royal rebuke incident, below:

After a chaotic morning and an equally confusing and tiring afternoon in the state assembly, Perak Regent Raja Dr Nazrin Shah was finally able to deliver his opening address — five hours after its scheduled time.

Raja Nazrin, the Raja Muda of Perak, was still not spared the peace to deliver his speech when, upon taking his seat with his wife Raja Puan Besar Tuanku Zara Salim, ousted menteri besar Datuk Seri Mohd Nizar Jamaluddin requested to raise an objection on the allegedly forceful and illegal means employed by the Barisan Nasional to remove speaker V. Sivakumar.

Raja Nazrin, who had been delayed since the morning by the disarray in the assembly, then asked Nizar and ousted senior exco Datuk Ngeh Koo Ham to approach him. They did their sembah and kissed the regent’s hand. 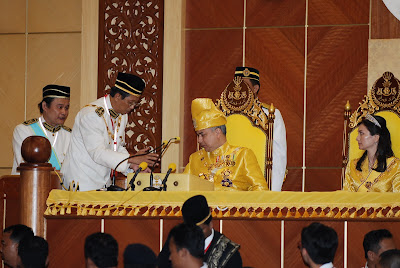 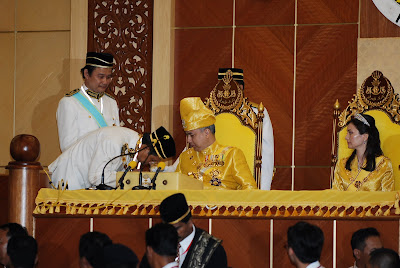 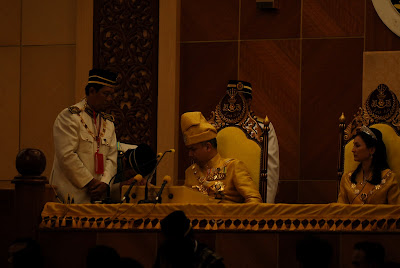 While Raja Nazrin took care to speak to them away from the microphone, his advice, which sounded more like an admonishment, was audible over the hall’s speakers. 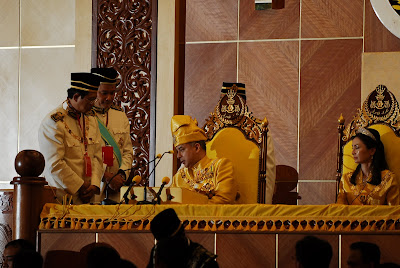 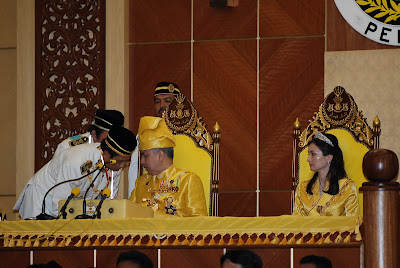 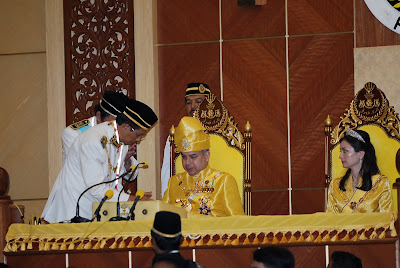 “So go and tell that (to the Pakatan Rakyat state assemblymen who had stood together in front of the royal dais to take their seats).”

Note: His message may have been made known to many. Read here, here and here. There is also those around who could have heard. Please don't try to deny and spin, Nizar and Pakatan Rakyat supporters.

Nizar then told the PR state assemblymen to sit so that Raja Nazrin could deliver his opening address for the first meeting of the second session of the 12th state assembly.

However, just before Raja Nazrin could begin speaking, Nizar once again pointed out to the regent that there were unauthorised people present in the state assembly.

Nizar was referring to a group of more than 50 policemen who were earlier brought in at the request of the BN. Despite protests from PR state assemblymen, the policemen continued to remain in the House. 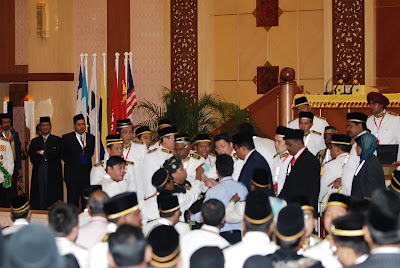 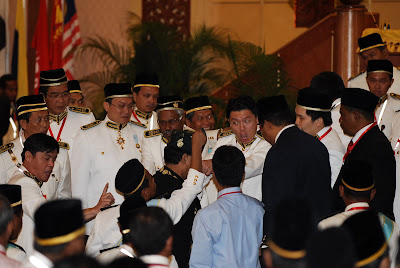 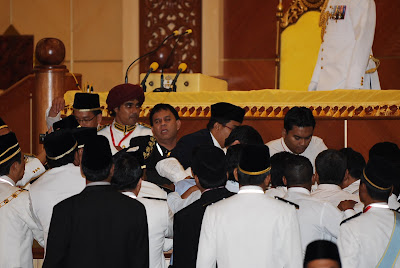 Note: Those police were brought in by the Speakers upon seeing that event have turned out of control and the Bentara was roughed and suffred injury (at his feet I believed). There is a provision in the Standing Order to empower the Speaker to bring in external security. 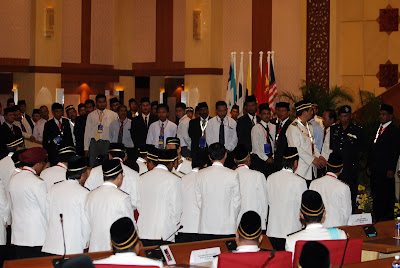 Notice the Pakatan Rakyat ADUN, particularly the PKR and DAP are standing in the centre. Whilst, the Barisan Nasional ADUNs are respectably seated in their seats.

Shortly afterwards, the police personnel, who had formed a barricade between the royal dais and the assembly floor to keep Pakatan members from approaching the royalty, left the assembly after Nizar made his request to the regent. 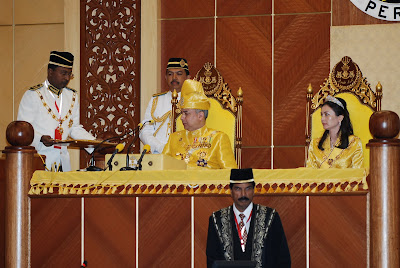 Note: The Menteri Besar delievering the speech to the Regent. It is a sign of acknowledgement of his position from the palace as a rightful Menteri Besar.

In his speech, the regent reminded the state government that the tourism and services sectors in the state could be affected by the uncertain global economic climate and the A (H1N1) influenza outbreak.

Note: Due respect HRH, there was an outbreak of a version of Swine flu called S1-N3 in the estemmed Assembly that day. Just a humour from blog Parpukari here.

“The state government is advised to take proactive measures to tackle the current concerns as well as prepare plans to achieve the Developed Perak 2015 agenda.

“The move by the state government to set up the Perak Economy Council is a good one. I believe that this consultative council, with economists, academics and industry experts as members, will be able to give rise to new ideas in the effort to confront the current economic crisis,” he said.

Raja Nazrin, who was originally due to give his opening address at 10am, also thanked the federal government for the RM10.05 billion development allocation under the Ninth Malaysia Plan and RM297 million provided for Perak under the second economic stimulus package.

He said besides encouraging downstream activities and creating spillover effects, the state administration should implement programmes that had already been approved.

Note: The problem Zambery Government may have to face up is the imprudent over commitment made by Nizar the Ngeh-puppet Government's commitment to be populist. There were lining of pockets to DAP proxy businessmen. The list of such conpanies newly registered after March 8 2008 and RM2 companies allocated timber concession, state land and property development orders.

Raja Nazrin also welcomed the federal government’s two stimulus packages to pump-prime the economy, pointing out that big countries like the United States, China and Japan had similarly boosted spending against the worldwide recession.

Note: Respecfully, the Regent made it a business as usual affair and did not touched anything on the shameful fracas today by Pakatan Rakyat particularly DAP.

However, there is a meaningful quote by HRH: "The firm action taken by the authorities in enforcing the laws should be supported and the principle of the rule of law should be held dear."

However, there is a meaningful quote by HRH: "The firm action taken by the authorities in enforcing the laws should be supported and the principle of the rule of law should be held dear."...

ya ka? think is blardy ok to drag the speaker out of the hall like a dog?

His Highness Raja Muda had to wait for more than 5hours.

I am sure he was also monitoring fro his room, the goings on.. LIVE..

Mungkin itu pasal dia singled out and summoned Nizar and Ngah. Had it been the BN side that's misbehaving, surely he would have summoned Zamby?

Leave his theatric aside. Typical berlakun ala Anwar Ibrahim.

It is bloody okay becasue the speaker has no respect for law and order.

When he was removed as speaker he refused to leave his seat.

The new speaker has the right to call security when Bentara could not carry out his duty.

In fact he was attacked and injured by the DAP Communist terrorist.

Sivakumar did not care to carry out his duty as per declared and ordered by Sultan to ensure the smooth progress of the assembly. He was determine to disrupt it.

As I personally see he should have received a worse treatment than this. Should have been kicked in the butt.

Let's hope the rakyat gets to see all the videos and judge for themselves, since the true colours of every politician were displayed clearly.

".. think is blardy ok to drag the speaker out of the hall like a dog?"

No need for us to say it.

But our English teacher taught us, when a dog insist to occupy the manger denying cows to eat the hay, the farmer had to eject the dog by biting its tail.

You go ask your speaker what happened to the dog in the manger's tail.

That blardy "dog" deserved it! Nothing more nothing less.

siva the boss, deserved the way he was treated. He should have obliged gentlemanly when asked to leave. all he had to do was vacate the speaker seat and be seated with the other pr assemblypersons as he is still the tronoh rep.

One can imagine if this was the situation at Parliment....
Maybe, Perak's case was just for
".....starters "

Anwar sheds light on royal chat
Athi Veeranggan | May 11, 09 1:37pm
PKR de facto head Anwar Ibrahim has revealed what transpired during a brief conversation between Perak Regent Raja Nazrin Shah and Pakatan Rakyat leaders, Mohd Nizar Jamaluddin and Ngeh Koo Ham during the chaotic state assembly session on May 7.
MCPX
Anwar claimed that Raja Nazrin had told Nizar and Ngeh to take their seats and allow him to deliver his address in opening the assembly.

At this point, Nizar informed the prince that Pakatan elected representatives had been treated viciously by their Barisan Nasional (BN) counterparts, according to Anwar.

"Nizar informed Raja Nazrin that the speaker (S Sivakumar) had been forcibly evicted from the House by unknown officials,” he said.

Anwar, the Permatang Pauh parliamentarian, was speaking at a Pakatan rally last night in Mengkuang Titi in Seberang Perai. About 5,000 people were present.

Asked later to elaborate on the conversation, he said Raja Nazrin - after hearing out Nizar - had nodded and said he had taken note of all the incidents. Nizar and Ngeh then took their seats.

"Nizar told me that this what transpired when Raja Nazrin summoned him and Ngeh to the stage. I believe Nizar,” he told journalists.

"Birds of the same feather flocks together"