No to study leave to escape prosecution! 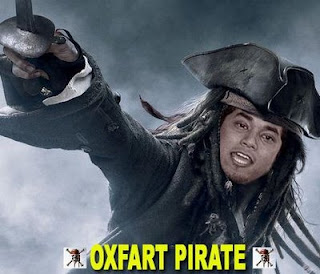 The blog Pejuang Bangsa is one of a coterie of Khairy's salaried Setiakawan blogs and operated by one or two person at RM7-8,000 a month salary. Nama saja macam real. They posted this morning a sympathy spin using comments by PAS Youth Chief, Nasruddin Tantawi on Khairy's "stand down" from politics.

Typical of Setiakawan bloggers. Even at their last drawn salary from Khairy, they are still pathetic bloggers - ill-informed and shallow. They should know that Nasruddin is not seen within PAS circle as bright and capable youth leader. Most of the time he talks rubbish. The choice of person to say those words only weakens the credibility of his spin.

Pejuang Bangsa seemed ignorant to a reality that when a public personality is off away to further study, it means there is something brewing. Khairy does not need another degree or a doctoral degree. What happen is, he got his knickers in a twist.

In the past, study leave or offer for ambassadorial position or migrating abroad are meant to tide a hot local situation down. In the case of Khairy, it looks to be a permanent one and Pejuang Bangsa will have to look for a new master.

But if it is to escape prosecution for any wrongdoing, then that is wrong!

Pejuang Bangsa should be following Sakmongkol's writing with regard to Alcatel. Read here, here and here.

If Sakmongkol inference was not clear enough, read this from Bigdogdotcom here.

Here are rearranged excerpt from The Star report:

Documents made public by the US Securities and Exchange Commission (SEC) and the US Department of Justice on Monday alleged that French equipment supplier Alcatel paid bribes to employees of Telekom Malaysia Bhd (TM) in exchange for non-public information.

The SEC alleged that Alcatel Malaysia’s management consented to these payments and those who got the kickbacks were two consultants who received payments of US$200,000 and US$500,000 through US bank accounts purportedly for market research.

Because of the bribes, it claimed, Alcatel won a US$85mil contract. The contract is said to be for the deployment of equipment for Celcom’s 3G rollout under phase 2 in 2006.

Source informed that Alcatel sold to Celcom an unworkable solution from a bad solution provider. Didn't quite pick up the name but it sounded like Nortel. TM has a lawsuit against Alcatel.

Sakmongkol had disclosed that the consultant paid for USD200,000, refered as Consultant A was Dato Dr Norraesah, Chairman of Alcatel Malaysia, French trained economist and appointed member of UMNO Supreme Counsel.

Isn't it odd that a Chairman be paid Consultancy fee?

However, Sakmongkol did not disclose that the Consultant B being paid USD500,000 was wunderboy Khairy Jamaluddin.

A source claimed that Consultant A and B did not submitted any report and written submission of work to justify being paid the Consultancy fee. How could could they put in a report for stealing information from within Celcom and get someone inside to push for Alcatel.

Sakmongkol revealed one of the Celcom insiders was Celcom CEO, Dato Shazally Ramly, someone socially closed with Khairy during Pak Lah's time but now have distanced himself away.

This case is undergoing investigation by MACC. The fact that the American SEC picked it up could means it is as good as in the bag.

One can imagine Khairy being approached by someone of authority and told to go away to avoid the heat. He was advised to tell the press he is continuing his education or undergoing medical or whatever. Khairy should try enrollment into Al Azhar and take up Usuluddin. Hopefully he become a better human.

Khairy would usually claim there is no proof or evidence to pin him down as per his usual boast. This should not be the first time Khairy is approached by such person.

In past private four eye discussion with those he can't outsmart, Khairy never try to deny he has been dipping his hand in the cookie jar.

He claimed he has got himself covered and there is no proof. He usually say he sold of ECM Libra but not discuss the long list of Securities offenses broken by the merger deal.

He confessed he only took a little and not as much his brother in law Dato Kamaluddin Tun Abdullah. And he would justify to say that he is only a son in law and must earn his keep too for his pride and honour.

In this fictitous encounter, Khairy would spontaneously deny. The person of authority would reveal case after case and file after file which Khairy thought is not known to others.

If blog Anak Omak can list Khairy's little plunges in the cookie jar. Even this blog could reveal of a video evidence of Khairy harrassing delegates for votes that concealed on Pak Lah's request. Let alone someone else more "informed."

One can imagine Khairy's surprise when he thought he had covered everything but left many trails of evidence.

At first he curse his boys, including the Tingkat 4 boys, but then he realised A Voice was right to ignore his inteligence and called him as green. Anifah Aman was spot on when he described Khairy as clever but not wise.

Finally, Khairy relented from his repeated denials to admit. He was asked to disappear immediately but managed to negotiate to kasi face. Thus the "stand down" to quit politics after the general election.

But it is not over. A Voice still have an issue.

Why should Khairy be allowed to go on study leave to escape corruption charges. So what he is the son in law of a former Prime Minister? Wrong is wrong!

Tell me Mukhriz is clean. I was told that he lives in a spacious bungalow, mana dia punya wang mari?

Ahhh.. Now it's clear how an unemployed can live like a king and a playboy. So how many more cans of worms are there in his closet if one may ask. Let's see how this big talker worm himself out of this one. One up on the old fart Kutty eh.

Tell me, who is clean in umno ?

Do whatever they want to do now. Sooner or later they will have to face it.
Rakyat will not forget, not only KJ all of them!

This subject is about KJ.

What the fuck should I discuss about Mukhriz?

He was a businessman and used to have a job.

How come KJ is so rich but never employed?

Anon 5.35 is a typical bebal nak mampos punya cybertrooper upahan si kitol beruk dalam google punya! That is why instead of answering about this issue he blame somebody else, in a way dia mengaku dan tahu kitol memang kaki sebat la kan?

wrote something about your perception on KJ. Tell me if it is half wright.

In the complaint, the SEC alleges that "55. From October 2004 to February 2006, Alcatel bribed government officials in Malaysia to obtain confidential information relating to a public tender that Alcatel ultimately won, the result of which yielded a telecommunications contract valued at approximately $85 million"
Paragraph 55

58. These bribes assisted Alcatel Malaysia in obtaining a contract with a potential value of$85 million.

59. The Telekom Malaysia employees who received bribes were "foreign officials" within the meaning of the FCPA and were in a significant position to influence the policy decisions Telekom Malaysia made.

Question 1: Since when had KJ ever been on Telekom Malaysia's payroll?

Answer : Since Never. Never ever has been an employee of Telekom Malaysia.

63. These consultants also worked for A1catel Malaysia before formal agreements were finalized and executed, under what they called "gentlemen's agreements," which required that consulting agreements be entered into retroactively. This process allowed consultants to work for Alcatel Malaysia without being properly vetted through Alcatel Standard's due diligence process.

Since when did KJ after having purportedly worked for Telekom Malaysia actually work for Alcatel Lucent?

Are you illiterate or stupid?

Insulting the blog owner will not get the daylight of your comments.

Don't think that by giving your links I will help you get traffics to your blog.

Your adolescent answer have been preempted.

Read back the posting, MF!

Datuk Norraesah was fondly remembered as the chairman of Bank Rakyat. There were some speculations on her departure from the bank after her short tenure there.

Datuk Norraesah is currently the chairman of MYEG. The company is essentially a non-bumiputra company having the malays as the frontliners. They currently control the market for online government transactions.

She has also won a seat in the UMNO Supreme Council in the previous UMNO Election when Abdullah Badawi decided to step down. She declared herself to be in Najib's team.

She was put in place as a parachute candidate for Balik Pulau parliamentary seat but lost to Yusmadi Yusof of PKR during the last GE 2008. Nevertheless, all the state seats under that constituency retained by BN.

We wish her luck in her future undertakings.