Ever since a document leak by a blogger of a plan to change back Johor's weekend holiday from Sunday to Friday, it has become the talk of Johor just like the time the plan to change from Friday to Sunday was made known.

It got Johor civil service officers embarassed with the leak. Secretary to the Johor Royal Council, Dato Abdul Rahim Abdul Aziz told the press that they are investigating the leak.

Menteri Besar, Dato Khaled Nordin had to come forward to explain that it is still at the proposal stage and still under deliberation.

They should just lighten up. There is something good with the leak. It got the public to discuss the proposal.

Don't quite remember the year but the switch from Friday weekend to Sunday started at the tail-end of Tan Sri Muhyiddin's stinct as Johor Menteri Besar.

Before the plan was implemented, Muhyiddin went around the state and met UMNO grassroot leaders and members in Johor to explain the rationale. We remembered one uncle who attended the briefing saw an emotional reaction to the proposal.

For Johoreans, so used to having the luxury of going to Friday prayers on their weekend, it was sort of  sacriligeous to the rural folks to have Friday as an official work day.

In the urban areas, there was the odd arrangement for those working in the private sector.

In Johor back then, kids went to school on Sunday which is the day off for some parents. On Friday, school children start their weekend, while parents working with private sector had to work, only spend weekend with their children the next day.

We experienced that situation during our childhood in Johor Baru. That was the time father was the headmaster of a private school in Singapore. Mother was teaching at Sekolah Abdul Rahman Andak in Johor Baru. She would commute to Singapore after lunch to help out father at his school. At times, she would be in Singapore on Sundays.

Those were trying times and they worked hard to lead a 6 days work-week. At the time, their entourage was 4 and their final head count was eight; seven boys and a girl.

That went on till father had to leave as a result of a subtle fervour of nationalism by certain groups of Singaporean Malay in retaliation to the Malaysia-Singapore split after 1965. He joined the state civil service as a government Imam. That must be in late 1960s.

So for the most part of our childhood, both children and parents had a common weekend.


Part of the rationale by Muhyiddin then was to put Johor working days in sync with the rest of Malaysia, particularly Kuala Lumpur. Some government officers, who had to regularly attend Monday meetings in Kuala Lumpur, basically lead a 7-day week.

Another part was to streamline the weekend holiday between the government sector and commercial sector.

There were sensible adminsitrative and economic reasons and rationale to the move then but for selfish and sentimental reasons, our preference remained for a Friday weekend.

Typically for us as a kid then, we look forward for Thursday.

Not only tomorrow the weekend will soon begin, the evening is malam jumaat (thursday evening). We would hurried home, immediately took our bath and zoomed for the nearby masjid or  surau. Father usually insist on living in homes located within walking distance so that azan can be easily heard.

After maghrib on malam jumaat, there are usually makan (eat) at the masjid or surau. Someone in the neighbourhood would send food to be eaten together after thanksgiving or special request tahlil and doa.

In today's lifestyle, the dishes are nothing fancy but it was a big deal to us then.

At the time we were living in the Masjid Abu Bakar staff quarters, there were even Indian Muslims who loves to giveaway coins to children after malam jumaat prayers.

For the elders, the time from malam jumaat till Friday prayers the next day is the time for ibadah. They would perform sunat prayers or read the Quran or do zikir. Some start earlier by fasting on Thursday.

It may not be a common sight in other parts of Malaysia but Johoreans, particularly the elders usually dressed up in full baju Melayu and kain samping for Friday prayers.

It is odd to go to a Masjid in Johor on a Friday in casual attires of everyday shirts and pants or kain pelikat. One would look out of place in such attires.

That formality for Friday prayers was an old Johor tradition to celebrate it as the end of Friday ibadah and also to respect the holiest day in the week.

In our family, the weekend fun and play time starts after Friday prayers till Saturday evening. Usually Friday morning was assigned to do chores and to finish up on our school homework.

As teachers themselves, the condition to finish homework before play time had always been strictly enforced.

Our favourite past time was reading. We would usually borrow books from the public library for one to two weeks read. It is one request to go to town that will never be denied by our parents and we never abused it.

But on the way there, we do stop for a breather at the Johor Baru botanical garden playground and used up more energy playing the swings. Anyway it is not too far from home, about 15 minutes walk.


Our home at the Masjid Abu Bakar staff quarters was near Johor Baru's Pantai Lido. The beach stretches out during low tide and had lots of kepah, a type of shellfish.

On certain Friday mornings and it is usually when our parents were in a good mood because we had been good for the week, they would go easy and take us for kepah picking on the beach. Sometimes we mistakenly (but usually on purpose) dirtied ourselves and conveniently had to take a dip in the sea to clean up.

Fresh kepah dishes would be lunch after Friday prayers. 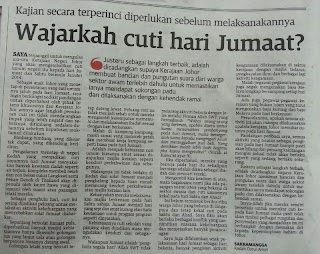 Seeing children in Kuala Lumpur missing Friday prayers because there are no adults to take them to masjid or no proper adult supervision to ensure and discipline them to go to Fridays prayers, it is really sad.

Salam ABITW
The only schools in JB which had Saturday and Sunday weekends were Convent of the Holy Infant Jesus and St Joseph's while the rest had Fridays and Saturdays off.
I remembered having to wait for my civil servant father to pick me up from school after the Friday prayers, with him all dressed up in Baju Melayu Teluk Belanga and the sampin. That is the only day he does that; mother does the ferrying to and from school on workdays.
My brothers were in St Joseph's, so they missed Friday prayers during their schooling days. A pity really.

Anyone who wish to (or accidently) miss a prayer, will miss a prayer, Friday or any other day!
Your reminicense of Thursday's half day and Friday's off days reminds me how difficult it was to arrange a family outing. It was odd frolicking at the Kota Tinggi waterfalls or at Desaru or do shopping in S'pore, when you'll always be looking at the watch as to when to pack up for Friday prayers while the kids were enjoying themselves.
To visit Kota Bharu or Kual Terengganu on a Friday is almost a no no for me now, because all my favourite restaurants or batik shops are closed on Friday.( but not so in Makkah or Medinah)
So let's not be retrogressive in bringing back Fridays as the weekend.

Pantai Lido - "they would go easy and take us for kepah picking on the beach". Unfortunately these days not many dare to eat them anymore due to pollution. If I remember correctly, there are plenty of crab too.