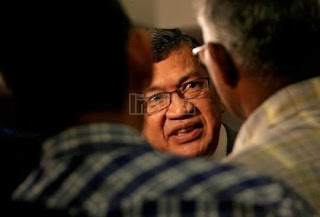 Instead of thanking his lucky star for escaping conviction and move on, the infamously acknowledged corrupt cop, Dato Ramli Yusof intend to sue the government for alleged conspiracy suit and defamation for a humongous amount of RM128.5 million. [Read Rocky Bru here]

In the heat of the expose against Ramli's asset, there is a rumour going around in early November that the former CCID Director had a meeting with Tun Dr Mahathir.

It seemed to get coverage by Malaysian Insider and Malaysiakini as though Ramli had convinced Dr Mahathir to take on Attorney General, Tan Sri Gani Patail. OutSyed the Box [read here] wrote about the rumoured meeting but denied such meeting.

The rumour is interesting.

Upon his appointment as CCID Director, Ramli tried to reopen twice closed case against Tan Sri Tajuddin Ramli with an unsubstantiated accusation that MAS loss RM8 billion under his watch.

There was conspiracy was initiated by Ramli Yusof's law school friend, Rosli Dahalan. He is a lawyer with Allen Gladhill Hishamuddin Lee and was handling the MAS account in their legal issues against Tajuddin. By the look of it, the RM8  billion could be Ramli's mathematical incompetence.

There was help from uncle Lobert, Tan Sri Robert Phang as the barking dog and Prof Dato Din Merican and Raja Petra Kamaruddin in a minor role to kompang the issue. Din is till gloating from Ramli and Rosli's acquital but beginning to sound like a broken record here championing the corrupt.

Among those together in on the conspiracy are Pak Lah, Tan Sri Nor Mohamed Yakcop, Dato Idris Jala, and Dato Anuar Zaini. 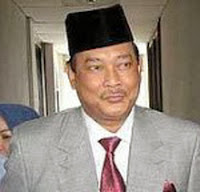 The rumoured meeting with Dr Mahathir could be Ramli's attempt to shake off bloggers exposing his allegedly ill-gotten assets. They are also calling for his investigation.

It could also be a perception play to bring a better light to his personal revenge against personalities like Gani Patail and former IGP Tan Sri Musa Hasan, and institutions like police, MACC and public prosecution office.

However, Dr Mahathir is not one to be easily taken into believing from a man whose personal issues became a rallying point for opposition to ridicule public institutions. [Read Imrite here.]

It turned out that it was not Ramli Yusof that met Dr Mahathir but his comrade-in-corruption, Dato Mat Zain Ibrahim. 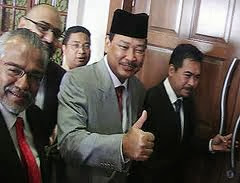 Sinar Harian report only wrote of Dr Mahathir not expressing opinion till he is able to read the claimed statutory declaration made by Mat Zain on the alleged wrongdoing of the Attorney General, Tan Sri Gani Patail.

Their source for the reported meeting was from other "media melaporkan."

Nevertheless, there is truth that Mat Zain met Dr Mahathir in the presence of Matthias Chang and Dato Muhammad Shafee Abdullah but it is not true that Ramli was together in the meeting.

By reporting the presence of Shafee Abdullah and Matthias Chang in the meeting, it does not serve to give credibility to opposition media also.

Off course there will be those that will say Shafee is interested to replace Gani but as lawyers, he can be on either side in a case. He represented clients against MACC and represented MACC in the Teoh Beng Hock death enquiry.

And finally, it is also not believable and credible that Mat Zain would bring up the Anwar black eye issue with Dr Mahathir.

In conclusion, it does not give credibility to an attempt by Ramli and his mastermind, Rosli Dahlan to revenge against MACC, AG, Tan Sri Musa Hasan and Government.

These media are giving support to them for the simple motive of the opposition to discredit and weaken public institution in their pursuit bring the BN government down. There is no journalistic integrity involved but motivated by an agenda.

It is hardly a surprise for Dr Mahathir to meet and listen to Mat Zain. He is known to have received the audience of Mat Sabu, Dato Mahfuz Omar and many others.

And he has not shyed away from meeting George Soros, George W. Bush and Paul Keating.

The fact is Dr Mahathir has always been ever willing to meet anyone, including students and youth, to hear the many sides to a story or issue or explain his point of view of the government's. 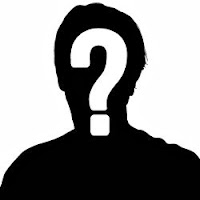 However, meeting by Mat Zain alone is no guarantee that Dr Mahathir will blindly accept what was told to him.

In this case, he insist on reading the statutory declaration himself before forming an opinion. It means he will most likely check out the fact and figure out the logic and motive of the declaration.

Just like his meeting with Mat Sabu, Mahfuz,and the rest, one cannot expect Dr Mahathir to simply take the words of someone like Mat Zain.

[Note: We had earlier mistakenly placed a picture of Tan Sri Ibrahim Zain as Dato Mat Zin. For someone so outspoken for the past few years, his picture could not be found on the Internet. There seem to be a conspiracy by the media to display the picture of Gani in reports on Mat Zin. Try googling...]


Mat Zain was known as the police responsible to investigate former IGP Tan Sri Rahim Nor in the Anwar black-eyed incident. His public image is that of an honest cop but in the close circle of police, Mat Zain is widely dubbed as "7-million dollar man."

The reason can be easily guessed since he was close to Ramli in his days in CID and as KL Chief Police. However, he may have lost all his ill-gotten gain in a business venture. [Read our past posting here and with more details in Taiping Mali here.]

Mat Zain made headlines when he made damaging statements against the government in favour of Anwar. He said the DNA evidence in the 1998 case against Anwar involving Azizan was fabricated. This is against Dr Mahathir conclusion from his own investigation that Anwar was indeed a homosexual and had sodomised his wife's driver, Azizan. 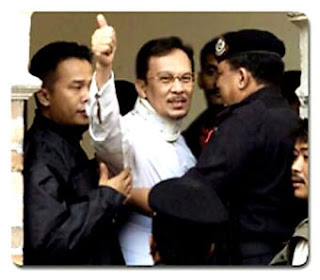 Mat Zain's claim is suspicious, because in court, it was revealed that Anwar was working in cohort with a doctor to fabricate the DNA sample of Azmin's daughter alleged to be born out of wedlock between Anwar and Azmin's wife, Shamsidar.

It is widely believed that Mat Zain may have being bought over by Anwar by saving him from bankruptcy. [Read The Unspinners here.]

It was evidenced when his financial affair was exposed, Malaysiakini defended Zain by accusing the government of doing character assasination to discredit Mat Zain.[Read Hantu Laut here.]

Like Ramli who is using the court to clean his name, Mat Zain could be thinking he could do so by meeting Dr Mahathir and try to form an alliance to pin down Gani Patail. He must be thinking Dr Mahathir is unhappy with Gani and hopefully those with common enemies can work together.

The interesting side to this meeting is whether they have stopped believing in Anwar in their fight against Gani. Has Anwar's influence no more threatening and effective?
at 11/14/2013 02:34:00 PM

Well, its his right to sue who he wants. Let him. He's not asking for you to fund his legal expenses. Gani Patail and Musa Hassan. To add flavour to this case, Shafie Abdullah should also act for Ramli.

But that does not deflect the question why ag and musa Hassan lied to have ramli prosecuted? Why are u diverting attention to mat zain?

For us to divert, we need to see details of Mat Zain's alleged sstatutory declaration.

We do not need to deflect for Gani and Musa Hassan. THey are capable of answering for themselves.

What matters is why is it for many years Ramli Yusof had not answered how he acquired his multimillion ringgit assets?

Using another crook to go after Gani and Musa, it does not make the crook an angel and strengthen allegation against Gani and Musa.

That is all it.