A stone throw could hit a Datok In our posting on the stripping of Datokship here, blogger Life of Annie left a note to remind that there is always two side to a story.

Although the posting was just us rambling our thought and not definitive like journalist reports, we appreciate the reminder.

It would have been great had she shared what she knew. If we had made up our mind, at least for the benefit of readers. Other sources did came to tell us more stories on the stripping of Datokship.

However, we are were never interested to write about it in the first place. It is after all his Highness's prerogative.

Nevertheless, the incident had brought to light the issue of abundance of Datokship.

For a bohemian character like us, titles and decorations are just beyond us.

Even some close friends in high places (or used to be in high places) refused to divulge detailed curriculum vitae of themselves for fear the information be used to fill up Datokship candidacy forms.

At a time a Datok Seri or market differentiation of Datokship is sought after, there are those that humbly do not see themselves as deserving to be confered one.

To be decorated with a Datokship, one has to carry oneselves respectably and behave in a proper manner and decorum. That would be stifling for the likes of us. It is like a ball of chain to be dragged around.

More important, those with such decoration must not dishonour the title by not meeting up to their responsibilities and carry themselves in a conduct unbecoming of a Datok. 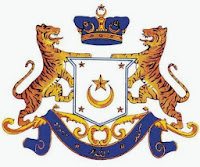 Again, it is the Sultan's prerogative to retract the titles. It is irrelevant to discuss whether Sultans that took back conferred Datok had legitimate basis.

Only in the recent episode, the announcement looks embarassingly unplanned.


Secretary of the Council of Royal Court, Dato Abdul Rahim Ramli dutifully made the announcement at the time he was penning a series on the Johor monarchy in the NST.

It was a public relation exercise for the coronation of his Highness Sultan Ismail Almarhum Sultan Iskandar and Raja Sofia Sultan Idris scheduled for May 5, 2014. One can read it here, here, here, here and here.

If the revocation had something to do with our suggested royal purge, it would have been a great display of his Highness concern to see the machinery of the state government run smoothly for the benefit of the rakyat.

It would endear the Sultan to the increasingly sceptical public towards anything from the establishment and concerted effort by minority fringe groups to question the very foundation of the country and it's Malay and Islamic heritage.

Thus far, states like Selangor have made the requirements to get Datok more stringent. Johor have done it longer. Recent revocation by Selangor and Johor are signals in the right direction because there have been so many claims of abuses in the conferring of Datokship that it had demeaned the title.


Coincidently or planned such, AFP published a report last week that appeared on many foreign news portal. We reproduce the one from an American news site, Global Post, below:

For centuries, the Malay royal title "Datuk" -- Malaysia's equivalent of "Sir" -- was a high honour that unlocked doors to the elite. But Datuks like K. Basil don't feel so special these days.

"Just throw a stone in the street and you'll hit a Datuk," complains Basil, a policeman-turned-politician and one of many who feel the awarding of the coveted titles has got out of hand in a status-obsessed Malaysian society.

Malaysia has one of the world's highest rates of royal title-holders -- estimates run into the tens of thousands -- thanks to a centuries-old royal patronage system linked to its now-ceremonial Malay sultans.

They range from politicians to businessmen, from badminton World No. 1 Lee Chong Wei to actress Michelle Yeoh. Nearly every major business or society function will add VIP prestige with a title-bearer as an honoured guest.

But allegations of fake or purchased titles along with now-routine reports of corrupt Datuks threaten to tarnish the royalty institution, spurring calls for greater scrutiny.

"It is an open secret that Datukships are for sale by cheats and those who claim to have the ear of the royalty, and there are individuals who abuse their titles," said opposition parliamentarian Thomas Su.

Su supports proposed legislation to criminalise receiving illegitimate investitures "to protect the dignity of the monarchy."

The most common, Datuk, is akin to a British knighthood but far more common.

Less than 100 will be knighted by Queen Elizabeth II this year, according to the British government.

But 700-1,200 new Datuks -- or the feminine "Datin" -- are anointed annually in Malaysia, whose population of 28 million is less than half the United Kingdom's.

There also are at least hundreds of "Tan Sri", an even higher-ranking honorific, and above them, "Tun", reserved for former prime ministers and other elite figures. There can be only 60 Tun at a time.

Malay cultural expert Eddin Khoo said titles are widely abused for their clout and connections in a country where corruption is widespread.

"Datukships have become crucial status symbols in a culture of ingratiation," Khoo said.

The perks begin with an official crest for a Datuk's car, "to show money is rolling by," said Khoo.

As far back as 2004, former prime minister Mahathir Mohamad -- now retired, and a Tun -- warned of a title glut.

"If you produce a million Ferrari cars, nobody will care about buying a Ferrari," he said.

Some Malaysian royalty have complained more recently of ill-behaved Datuks and of agents who allegedly claim to broker investitures.

In 2009, maverick blogger Raja Petra Kamarudin, himself of royal lineage, ruffled feathers by claiming Datukships can be purchased for 250,000 ringgit ($80,000), adding that recipients "can always make back more than this."

But making direct accusations is highly sensitive due to stiff penalties for insulting royal figures.

That has allowed people like self-styled royal Raja Noor Jan Shah Raja Tuah Shah -- who has a disputed claim to being the sultan of the southern state of Malacca -- to continue anointing Datuks.

Media reports this summer suggested Noor Jan had sold hundreds of dubious investitures -- Malacca no longer has a sultan.

Yet Noor Jan is regularly feted at events hosted by wealthy businessmen seeking to rub elbows with him.

Noor Jan entered a recent function in Malaysia's government headquarters of Putrajaya, resplendent in a royal-yellow military-style suit studded with medals and epaulets, trailed by an entourage of his "Datuks" to the beat of traditional Malay musicians.

"We could easily take hundreds of thousands of ringgit. But you see, we are still driving an old car," he said, referring to his vintage Porsche sportscar.

Danny Ooi, president of the Council of Federal Datuks, said people like Noor Jan must be stopped.

"It has been going on for the last 10 years, this problem of Datuks being given out (by self-proclaimed royals)," he said.

But Ooi admits money often changes hands even for legitimate investitures, though he terms it, "more as a contribution."

Meanwhile, reports of Datuks in legal trouble, typically for corruption, are common.

In one case, businessman Datuk Koay Khay Chye pleaded guilty in 2010 to drug possession. He was originally charged with trafficking, a capital offence.

The case created an uproar when it was reported he had retained his title despite earlier convictions for theft, firearms offences and corruption.

Some Melayus may fell offended that these non-Melayus demean the royal award with their conduct and comment.

But lets face up to the reality.

There is some weight of truth in what was reported. Furthermore, it is the Melayus, aristocrat or otherwise, that started to demean it till there is nothing special to the title anymore.


Datokship doesn't open doors and turns one into instant elites anymore. Like commodities in the market place, oversupply will bring the value of any products or services. There will be the usual fake imitation entering the market too.

Datokship is no more a high end product when there are Datokship that is bought rather than justifiably earned. It reminded us when the first among our piers was confered a Datokship. One friend from Kuala Pilah sceptically asked, "Ado ko jaso?"

He just started working for a Minister" and within a year or two, he was a Datok. Before that, he was merely a salaryman.

Since there is so many Dato and cynicism to those with such title, we bumped across Dato that are too shy or secretive of being a Dato. If possible, they want to remain as normal people. Such Dato has nothing to worry because these days, some Datok are seen doing things unheard of in the past like eating in makeshift food stalls and sidewalks.

Due to the loss novelty, some Malaysian can be too casual and improper to publicly address these Datoks, especially their friends, by mere name. It reminded us of a friend complaining on his recently awarded Datok friend.

He was rather casual with the Datok in front of others that the Datok had to remind him to address him according to protocol. Our friend reacted badly to the request for formality.

"If you insist I address you by your title, then please address me by my title ... encik."

Usually the ones so hard-up to be addressed properly tend to be the wives. They were not the one to earn the title but too happy to flaunt their "supplementary card."

It is fine in public and in the presence of others. However, it can be certainly suffocating and as the Australian would say, revolting to address them as Datoks and Datins in the private circle among decades old friends in Whassapp groups.

With so many Datok and even the number of Tan Sri is also on the rise, it does get difficult to address people.

One useful formula in a situation one is not quite sure of the proper address is to call all male of a certain mature age as Tuan. It should cover for all the Datoks, Tan Sris and including the Enciks, without annoying anyone.

For the common people, they feel good to be address as Tuan.

Although we do not regularly go around in white skull cap and baju Melayu, once in while we do get addressed as Tuan Haji.

As for ladies, we are still searching for that all encompassing address. Puan is not quite it. Hey is too rude. The easy way is ignore them and just attend the men. Let the wives figure it out.
at 11/16/2013 09:00:00 AM

Please look into this craziness of Datukship from Indonesia

1. 'To be decorated with a Datokship, one has to carry oneselves respectably and behave in a proper manner and decorum'.

Why do intl media like this afp always quoted the non malays? Could really see which side they're leaning to. V
I will never trust foreign media when it comes to local news.