Who will gain the respect - Malaysian or Indonesian? 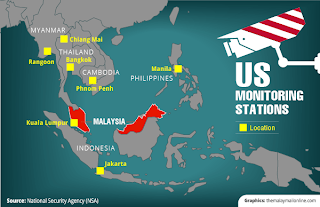 This is in reaction to spying allegations by Australia as reported in the Australian media from documents leaked by whistleblower Edward Snowden.

On October 29, The Guardian of UK and Des Spiegel of Germany 's exposed American spying operations in countries including Malaysia. [Read in Outsyed the Box here.]

Dato Hishamuddin immediately made a statement to request for an answer. There have been answers as reported.

BBC report on the Indonesian reaction is as follows:


Indonesia has suspended co-ordinated military co-operation with Australia amid an ongoing row over reports Canberra spied on Jakarta officials.

The move came after Jakarta recalled its ambassador from Canberra on Monday.

Reports of the spying allegations came out in Australian media from documents leaked by whistleblower Edward Snowden.

The alleged spying took place in 2009, under the previous government. Australia and Indonesia are key allies and trading partners.

"It is not possible that we can continue our co-operation when we are still uncertain that there is no spying towards us," Mr Yudhoyono said.

He added he would also write to Australian Prime Minister Tony Abbott to seek an official explanation over spying allegations.

The decision came after Mr Yudhoyono met with top officials, including the recalled Indonesian ambassador to Australia, to discuss the country's relationship with one of its closest neighbours, reports say.

"We're not only reviewing our co-operation with Australia, we're actually already implementing the downgrading of our bilateral relations with Australia," Foreign Minister Marty Natalegawa also said on Wednesday.

He added that Australia "must take concrete steps" to "repair the almost irreparable damage". He added that the relationship between both countries was "not business as usual".

Mr Yudhoyono said on Tuesday that ties with Australia had been "damaged" over what he said was "hurtful action".

Mr Abbot reiterated on Wednesday he regretted the embarrassment the media reports have caused.

However, he has also previously said he does not believe Australia "should be expected to apologise for reasonable intelligence-gathering operations".

The row is the latest in a series of spying allegations that have strained relations between the two allies, whose relationship include co-operation on asylum-seekers and anti-terrorism, among issues.

Earlier this month, Indonesia also expressed anger over reports that Australia's Jakarta embassy was used as part of a US-led spying network in Asia.

Malaysia had made the request earlier. 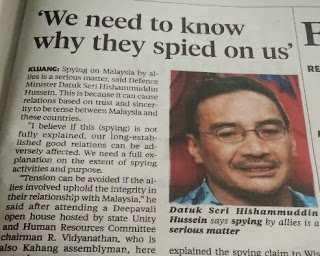 Contrary to the Australian reaction, the American could still play diplomacy. It is as though they ignored our protest and it will be 'business as usual'. The bernama report, below:

Spying allegation will not affect US-Malaysia ties: US State Dept

She said the US was open to any dialogue if there was disagreement, and the strong people-to-people connection between Malaysians and Americans would help overcome any issue involving the two countries.

"It is easier to solve matters if there is more human interaction between two countries.

"People-to-people relations between Malaysia and the US is very strong, with annually more than 100 people involved in exchange programmes at various levels, including students and professionals," she told Bernama during a dinner with Malaysia-American Exchange Programmes Alumni organised by the US Embassy in Kuala Lumpur here last night.

Houston, who is based in Washington DC, was on a two-day visit here after visiting Manila, Jakarta and Singapore. She visited Universiti Tun Abdul Razak (Unitar) to discuss opportunities for the students to undergo internship in the US and the Islamic Arts Museum.

Houston said since US and Malaysia established diplomatic ties in 1957, more than 6,000 Malaysians had been sent to the US for various exchange programmes, including the International Visitor Leadership Programme, trainings, internships and student exchange programmes.

"These exchange programme alumni members have better understanding on the US and will make positive impact in bilateral ties when they become leaders in future. The alumni members are the solid foundation for a stronger US-Malaysia ties later," she reasoned.

The issue of US spying activities surfaced, following newspaper reports on an allegation by intelligence whistle-blower Edward Joseph Snowden that the US had 90 electronic surveillance facilities worldwide, including in the US Embassy here.

According to earlier reports, Prime Minister Datuk Seri Najib Razak said Malaysia, in principle, opposed any spying activity on any government as it involved the question of national sovereignty.

Malaysia also sent protest notes to the US Embassy and the Australian High Commission here on the alleged spying by both the foreign missions in this country. -- BERNAMA

Another subsequent response as follows:


US envoy: No knowledge on alleged CIA presence in AG's Chambers

GEORGE TOWN: United States (US) Ambassador to Malaysia, Joseph Y. Yun (pic) has no knowledge on the alleged presence of two American intelligence agents at the Attorney-General's (AG) Chambers.

"I have not heard of that (any spying activity by the US' Central Intelligence Agency at the AG's Chambers).

"I think there was a clear statement by your government, two days ago, on the matter and I don't want go beyond it," he said.

Yun was speaking at a media conference after attending the American Malaysian Chamber of Commerce's Penang Dialogue 2013 here Wednesday, which was also attended by Penang Chief Minister Lim Guan Eng.

On Monday, Minister in the Prime Minister's Department Nancy Shukri had rubbished an allegation on the presence of two American intelligence agents at the AG's Chambers. She said such claims were unfounded.

Yun said US President Barack Obama had made clear that the US would review its current activities and thereafter, make a decision on balancing the security needs with privacy concerns.

The allegation on the presence of CIA agents in the AG's Chambers was raised by Opposition Leader Datuk Seri Anwar Ibrahim when debating the Supply Bill 2014.... 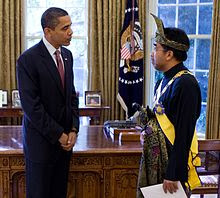 The Americans are not answering but diverting the issue. Strangely, we are repeating in agreement. Suspect that there was a high level secret discussion and an agreement reached. 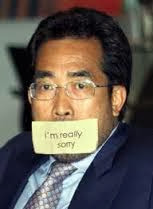 It is alleged that the Soviet KGB came to town just after Merdeka looking for Malaya's Foreign Policy. They could not find it and concluded that it was Malaya's best kept secret. And the KGB returned to Moscow. Months later, the Soviet Ambassador congratulated the Tunku for keeping the Foreign so secret. The Tunku nonchalantly replied, ' We have none !' Maybe, sometimes, it is best not to over-react. As I have said elsewhere, Kuala Lumpur is now a centre of espionage ahead of Bangkok and Singapore during the Cold War.

apa nak heran...just look the way both nation gain independant...indonesia really go to war..a bloody war to gain it..Malaysia..mmh..true diplomatic way...so you compare which one of this will be feared and the one seen as a softy.

If the ruling UMNO party doesn't bother about the future of Malaysia via its rampant apartheid rule and makan rasuah, what should it care about Malaysia being spied at.

Only the blinds will continue to vote for such corrupted party. Tolong bangsa Melayu, my foot.

I was reading the Jakarta Post while sipping kopi tarek on a cool windy street of Bandung just now, and yes, the headlines were fiery and the commentaries written in super-pissed-off mode on matters regarding RI-Oz relationship. I could feel their collective sense of sovereignty and pride upon reading the news. But back at home, Menteri Amaran just berani demand explanation. Meme ponde.

Talking about espionage and eavesdropping, Singapore has been doing this on all prominent Malaysians since 1972. All are recorded in their super-computer when they changed from manual to digital. Some tycoons even openly boasted in the Singapore golf courses that they have the ears of the good and the great in KL. Has anyone noticed the Singapore CIQC across the Causeway - black and ugly especially designed to bring bad feng shui to the North ? This is why we counter with the crooked bridge !