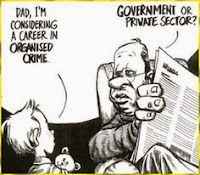 A typical Mike Spillane TV series or movie loves to use the line "crime doesn't pay". As long as the long arm of the law does not catch-up, crime pays well and pays really well for school droputs and kids from wrong neighbourhood and urban slums.

Tian Chua's political portal, Malaysia Chronicle here reported or spinned a study by a French researcher, Sophie Lemiere claiming that the majority of the underworld support BN, thus the blame on underworld activities could be deviated from Pakatan Rakyat.

Whether Lemiere has the credential or expertise to talk, she delivered a public talk at USM. Maybe it is a spin by MChronicle. If MChronicle is in the know of her study, did they helped to bring her in contact with the local hoodlums?

It is pointless to bring politics in because underworld is about making illegal money and their superficial political support will naturally be to individuals with authority and access to resources.

How would Tian Chua answer to the drastic rise in underworld-suspected businesses in Selangor and Penang since Pakatan Rakyat took over?

When ISA and EO was repealed, there was an increase in gangland war death. Online journal, Globe has a good article of what happened here. The article gave a mention of our fellow blogger Dave Avran.

The public was scared and worry for their safety. They just realised the need for preventive laws. However, the opposition were blaming it on police incompetence. The opposition demanded law enforcement "should be resolute and ruthless in dealing with the leaders and key players of these evil syndicates."

Opposition and their lawyers were first to offer legal assistance and political support in any arrest of gangsters and organised crime members. In the first raid at a gangster's hideout, opposition immediately  question law enforcement procedures and accused them of infringing on human rights.

PKR Vice President, Surendran wanted to monitor a police raid but eventually coward pulled out when police requested him to sign an indemnity release.

After much public outcry and calls from the police, government submitted to Parliment to amend the Prevention of Crime Act (1959) to allow for preventive clauses but power remain with the courts.

The opposition goes to the street to claim PCA was ISA 2.0. When asked for a solution to organised crime, their answer was to abolish the Special Branch (SB) and reassigned them to Criminal Investigation Department (CID) work.

It was a political answer meant to discredit SB, which monitor and gather information on securitiy issues and internal threat. CID dealt with crime.

Then they cook up the excuse that BN cannot be trusted. Who then? Trust the minority pro-crime Pakatan Rakyat politicians? It is obvious that Tian Chua-controlled MChronicle is trying to accuse others for an offense to deviate the heat. It is typically Anwar style of psywar.

It served to propagate the leak of Dato Zahid Hamidi's meeting with Pekida as a collusion with Malay gangsters. With most members working for Chinamen businessman, Pekida is hardly worthy to be called as gangsters or underworld.

It is because earlier, Zahid released a list of 49 names of organised crime groups, which are mostly Chinese and Indians. Read also this study on Chinese underworld here.

If that is the intention, the logic should be that the underworld should support DAP and their allies. Reason being 97% Chinese votes gave them support and Anwar claim Pakatan has majority of popular votes.

So put aside politics.

The underworld business is inextricably linked to corruption and relate to dishonest individual in power. Unless the government deals with them as the root cause, they will destroy the legitimate economy and those hardworking common people.

We've written before of how Malay and honest working retailers could not make a living because of competition of money laundering operation using retail businesses as front. 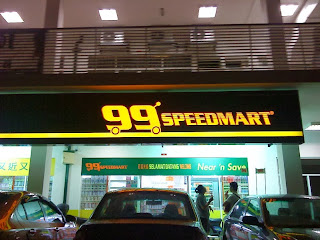 Several Malay bloggers had identifed 99 Speedmart as a Chinese-owned convenience store that should be boycotted in retaliation to 97% Chinese boycotting UMNO and BN candidates in the last general election. Little did they know that even if the boycott was successful, it will have minimal impact.

According to a street source and the information is reproduced verbatim, 99 Speedmart have a 350-400 outlets network built over 4-5 years but it does not really rely on retail sales. The outlets are front for money laundering or money cleaning machine.

The owner is a still young Chinese man on wheelchair but words are he is churning almost a billion worth of laundered money. This is an example of an elusive big fish MACC would want to get their hands on.

For the time being, the latest two catches yesterday by MACC and Police on two veteran Chinese police sargeants in their 50s, Lim Ah Bah and Tan Kim Hoi are good start for AMLA cases.

Talking about big fish, this blog had written an article in 2010 here about the anomosity against Tan Sri Musa Hassan.

While much was revealed about BN politicians association with criminals, it is not sufficient to support the notion of associating the underworld with BN. However, it proves how powerful they are, thus it indicate the big instant pay-off from dealing with underworld.

The posting should provide a background information on the current lawsuits by Dato Ramli Yusof and his lawyer, Rosli Dahlan against him, Tan Sri Gani Patail, Tan Sri Abu Kassim, Police and MACC.

When Ramli was CCID Director, the portfolio of organised crime came under him. His association with organised crime is legendary in the police community. It is obvious that he and his lawyer is trying to play innocent by suing for defamatory investigation.

The underworld is really big business that do not pay tax, thus anyone with the power to hold back investigation can reap wealth out of it. It explains his unexplained wealth.

In the article, a credible source estimate the local black economy to be worth RM500 billion. That estimate does not mention whether it in terms of "GDP" generated or "asset" worth.

However, in a Kinibiz article dated November 19 of a 3-part series on underground economy, the number is clearer. [Read it here.]


For example in 2010, then home minister Hishammuddin Hussein said that the government believed that the illegal or illicit segment of the informal economy alone had grown to almost RM10 billion and included a slew of activities.

More recently the country’s deputy finance minister, Ahmad Maslan was quoted in The Star newspaper as saying that the country’s so called ‘black economy’ stood at 30% of GDP.

The "official" estimate could still be an underestimate.

An Aljazeera report here quoted a UN studies claimed organised crime is worth US$90 billion a year in East Asia. As much as US$16.3bn worth of heroin and US$15bn of methamphetamine are traded annually in the region.

Malaysia used to be a major centre for drug trafficking till government made a drastic step to make drug trafficking offense as punishment by death sentence. Yet a DAP MP had recently described it as cruel. It only goes back to DAP's traditional association with drug trafficking.

Back in the late 70s, Karpal Singh made a name for himself as a lawyer by turning several sure lose drug cases. It attract attention also because Karpal Singh broke the "picket line" to an agreed boycott of drug cases by Bar Council.

To most Malaysians, they feel organised crime like drug only affects few. Consumer don't care. They will go to 66 Speedmart for cheap good. Those Bundle used cloth stores are also sourced from drug addicts stolen goods, yet they buy their cheap cloth.

On one hand, they complained on house break-in, drugs, prostitution, counterfeiting, smuggling, etc, but on the other hand, they contribute to the money flow which support illegal activities.

In a study mentioned in the Kinibiz article, it was highlighted that the negative impacts of black economy include inefficient goods and workers being deprived of their rights and guarantees.

The Frenchwoman's interest in research is mostly on Islamic extremism, if I remember correctly. She also had an article or two which mentioned ABIM and/or PAS etc as well as issues of proselytization of Muslims. I see her as linking extremism to something which is organized and/or somewhat state-backed. Either way it would be uncomfortable for a number of Muslims, PAS and UMNO alike.

Bundle clothing are not "drug addict stolen goods" - where did you get this idea from? You think junkies go around stealing clothes from washing lines and sell them at pasar malams? You do know these clothes come from countries like Japan, US and UK from donations and other sources? Goodwill, Salvation Army, etc. Lots of great, valuable vintage and designer pieces if you know and have the patience to look. Yes, I may be cheap but I don't shop at malls because I don't feel like dropping hundreds of ringgit on flimsy shit sewn by child laborers. Recycling rocks, dude.

we should legalize sports betting. it is happening whether its legal or not. Might as well colelct tazes from it.

Eventhough 99Speedmart is associated with money laundering, the prices that they offer are fairly cheap compared to even a normal store or even the big supermarkets...this does help for our low income or average income earners...so, why not? I support them for not blood sucking our money like some places do...