Why no face of Mat Zain on google? 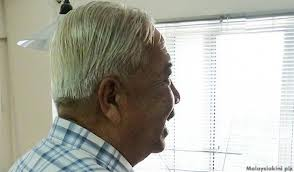 Former CID for Kuala Lumpur, Dato Mat Zain Ibrahim have been making many controversial statements that was promoted by the pro-opposition media.

It was disclosed recently that he met Tun Dr Mahathir in August in the presence of Matthias Chang and Tan Sri Shafee Abdullah. No news is heard on what had transpired.

Nevertheless, we've expressed our concern on the cop dubbed by many in the police force as the "7 million dollar man" in our past posting here.

Anyone linked to Dato Ramli Yusof are men of questionable repute, irrespective of the court's acquital of Ramli and his lawyer, Rosli Dahalan.

We are in a hurry for a wedding. so just this simple posting. Why no face of Mat Zain can be found on the Internet?

For someone whose been in the limelight and got extensive coverage for his statements, the only picture we could find of him by googling is the one above from behind his back.

Another observation to this is whenever one google for "Dato Mat Zain Ibrahim", one will likely come across pictures of Gani Patail, Musa Hassan, Ramli Yusof, and Tan Sri Rahim Nor. but no Mat Zain. It is no conincident that almost all pro-opposition blogs and portals would put up pictures of these people in any posting and reports related to Mat Zain.

Ibrahim Zain is the pride product from the early ITM. After finishing his Masters, he joined as ITM staff and rose to become Head of Business Studies and Dean of Students Affair.

Then he switched to banking and joined Amanah group. After several banking jobs, he became a corporate player and was the Malay face to a famous corporate Chinese personality, Tan Sri Khoo Kay Peng and his vehicle MUI. He is one of the early Malay corporate players and said to be a Tengku Razaleigh man then.

He had move on and still pitching till today. More of him here.

She used to be attached to the London office of MITI.

So many mistakenly assumed the male next to her to be Mat Zain or her husband is Mat Zain.From the back, Mat Zain have white hair.

Why is the opposition media trying to hide the face of Mat Zain? He is not an anonymous blogger or whistle blowers trying to shun publicity but a known personality who puts his name to his allegations.

And, he is not a rich man anymore to worry of his safety. He squandered his ill-gotten gain in a business deal with a Chinese businessman that almost made his bankrupt till Anwar was said to have someone bail him out. Someone told us it was Dato Soh Chee Wen.

I am just wondering as to why much attention is given to Ma Zain. He is not the IGP or DIGP or one of the Directors of PDRM and he in not even the CPO of a state.He is just a retired OCCI in KL with the rank Senior Assistant Comossioner.There are a few hundreds of SACs in this country including retirees with same rank. Furthermore its doubtful that this man has a degree from any university.My advise to this man is that as a wrga mas please spent the rest of yr life to Allah.Amin.