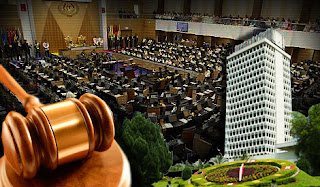 On September 24th, 2013, this blog exposed a typical leakage in a contract for Custom's IT system called as U-Customs. [Read again here]

However, there is a funny bit and that is where the leakage which allowed those with the insider contacts to steal the tender from the rightful winner.

We extract from the earlier posting:


Prior to reaching the Tender Committee chaired by  Najib, the papers and documents have to be sent to a committee of Little Napoleans.

Usually Najib and the Committee of top level government officers sometimes including MoF II would merely approve as recommended by the Little Napoleans.

Part of the manipulation by the Little Napoleans is to justify their bias preference for a certain company. When it is being questioned, they have the "bureaucratic-style answers" which serves to answer with the minimal of disclosure and to end the issue immediately.

That is an art by itself.

It seemed our posting caught the attention of a DAP Member of Parliament. YB Lim Kian Ong and he raised it in Parliament on November 12.

Don't make any assumption cause we hardly know this former MCA, Gerakan, etc. There are some 13 or 14 tenderers thus he could have sourced the information from any of them.

The following is the answer as prepared and provided by the Little Napoleans:

With that answer, Kian Ming was unable to reply.

It was done ash open tender and the lowest tender did not meet the specification. How is anyone in public to question the technical issues involved and whether the claim is true?

So they only make unsubstantiated accusation using simplistic assumptions and conclusions like Jesvan Kaur did in in FMT. To accuse, one must be able to lay some fact.
Brilliance Information is NOT the second lowest as claimed. MoF lied!

There are four other companies with lower bid than Brilliance Information. Our informer said that Brilliance is placed at around 3rd or 4th among the short-listed ones.

Assuming the technical shortfalls of the lowest tenderer is true (in which may not be since all the shortlisted one have Digicert), the fact also is Briliance Information comes 3rd or 4th in terms of technical.

As such it is near impossible for them to be positioned as 1st or 2nd overall.

If lowest company was not chosen due to some technical  flaws (in which such claims is still questionable), why then are other companies which has better technical engine not chosen?

For the sake of transparency, could the top 5 for technical; top 5 for pricing and top 5 be made known?

Surely, the Little Napoleans will insists to say it is private and confidential thus we are left only to believe that there was no hanky panky (when the tenderers know there was).

They will likely say government processing of tenders met the highest level of professionalism and practices as in accordance with some world standards of procedures.

But, the fact is the Little Napoleans that submit the recomendation to Tender Board may have not do so objectively and with the best interest of government.

Here is a big fish to catch.

A good investigation team from MACC could smell it is corruption. They need technical expertise to conclusively prove that the Little Napolean may have intentionally done a recomendation not to the interest of government.

Tuan Haji,
"They have also lied in Parliament, which is another offense by itself".
What else does MACC need to start an investigation.

It will take a thief to catch a thief, need money to make money and resilient 'big fish' whom is/are an experienced thief whom made his money and wants to come clean and do his final bucket list to rid himself of any guilt....l guess

Good expose though....hopefully there are takers to the offer.

Such a big project without a Proof of Concept will bound to fail. u-Customs is using COTS product therefore customization will be reduced. But does Brilliance Info solution used a real COTS? Microsoft is just a platform....Micro Clear and Greenlane...what are their experience. I heard a middle east country is replacing the Micro Clear system so why are we using them? Again no Proof of Concept or clarification been called....weird for a such big project...we hope PAC, AG and MACC look into this :)

Check this out. Another direct nego? No wonder we end up wif crappy systems! http://whistlewhistle2014.blogspot.com