1MDB bomb that blew up on the protoon instead 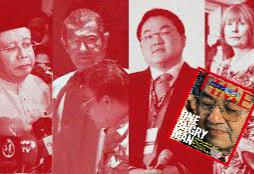 When anyone resort to spin, or deceptive cheap headline, or fake news and false fact or preposterous accusation (as Tun Mahathir is doing now) or argue incessantly, it simply mean they have NO CASE.

It is the same message the propaganda team and cybertroopers of Dato Najib should know.

Two days ago, Matthias Chang tried to viral a dramatic message that a nuclear bomb will explode on Dato Najib.

It was no nuclear bomb but him delivering a 40 minute sermon like a womanising TV evangelical Minister deceiving public for donation in a Sunday morning TV show.

It was comedic and impossible to be taken seriously when he mentioned:


"Facts will be out in cyberspace soon. Beyond my control."

As far as Matthias, whatever bomb he intended to explode, it may have blew up at his face. 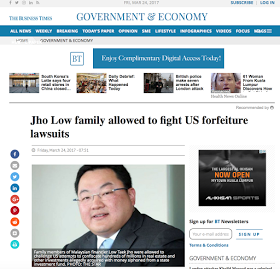 So much for an explosion. An American legal website, Law 360.com reported below:

The family members had struggled to get involved in the cases, losing a bid to file their own claims after their original trustees refused to be subject to U.S. jurisdiction. Last month, the family members' holding companies installed new trustees that aren't “paralyzed” by fear of facing potential money laundering accusations themselves.

In the interim, an October deadline to file claims in the case came and went.

The government argued that, essentially, when you shield your connection to your assets via an offshore trust, losing your chance to contest the assets' forfeiture because the trustee is afraid of U.S. liability is just what you get.

On Wednesday, Judge Fischer said while that argument held some “rough justice appeal,” it wasn't enough to keep the new trustees out of court.

While details are scant as to what enforcement the original trustees feared, Judge Fischer found the story plausible.

“The court sees no reason to doubt that there was at least a cloud of risk hanging over the former trustees that the government made no effort to dispel and that led, in part, to the failure to file timely claims,” Judge Fischer wrote.

The judge noted that he did not see the trustees' foot-dragging over ghost liability as an attempt to gain an unfair advantage in the litigation.

The bottom line for Judge Fischer was that, while using tortured corporate structures may hide illicit transactions, that's for the government to prove.

“The court is not going to simply assume it and forbid claimants from filing potentially valid claims,” the judge wrote.

Hundreds of millions of dollars are on the line in the cases, including hotels in New York and Los Angeles, a Beverly Hills mansion and a piece of EMI Music Publishing Management LLC, which holds the rights to millions of musical compositions. Other cases brought by the government involve revenues from the movie "The Wolf of Wall Street," artwork by Vincent van Gogh and Claude Monet, and high-end properties in the U.S. and London.

A spokesman for the U.S. Department of Justice declined to comment. Counsel for the parties did not immediately reply to requests for comment.

The family is represented by Daniel A. Zaheer of Kobre & Kim LLP and Aaron M. May and Grant B. Gelberg of Huang Ybarra Singer & May LLP.

Sarawak Report here claim there is to be a concerted action by the Swiss and Singaporean authorities.

Earlier, FMT reported here that Jho Loh will likely lose his hotel is false or will have to undergo due process.

Matthias was excited by a recent WSJ report claiming Jho Loh will be charged soon.

NST fell for WSJ's feint to publish a report that had only WSJ as quoted source, no official statement, and purely guesswork. [Read here.]

The WSJ article comes in the wake of earlier news that the US Attorney's office much publicised probe into money laundering by individuals linked to Jho Low is in jeaporday after US President Donald Trump fired 46 US attorneys upon being sworn into office.

LSS highlighted that given these circumstances, it is highly unlike anything will come out of the recent developments and urged Malaysians to focus on the good things happening in Malaysia now.


Rocky view the latest development as a landmark court decision WSJ, SR and the Mahathir-led conspirator would not like to know.

After month of supporting Trump by endlessly whacking on Hillary Clunton and former President Obama, Trump.failed him too.

He refuse to know that Trump tried to refuse Arabs' enter into US and intend to move the US embassy from Tel Aviv to Jeruselem. 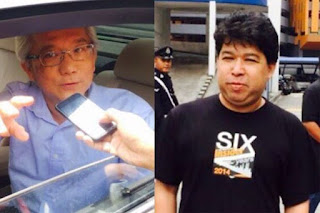 In a related news and highlighted by Rockybru here on the return of Jahabar Saddiq of The Malaysian Insider fame, The Edge's Ho Kay Tat tried to play transparency.

He called on Jahabar to reveal his new financier below: 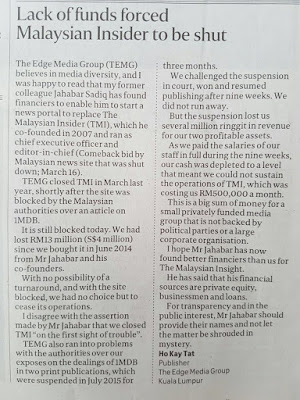 For sake of transparency and public interest, perhaps Ho Kay Tat care to tell us more on the conversation below: 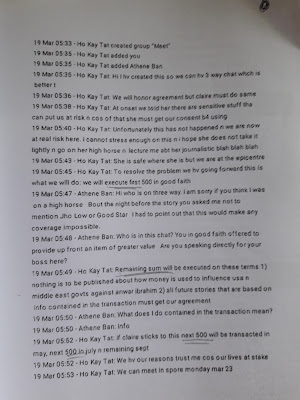 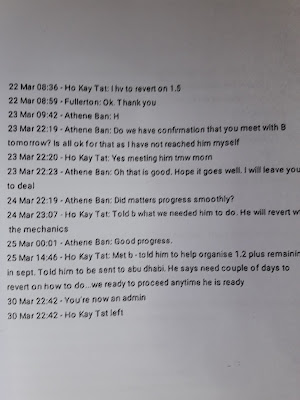 There was a follow up in which The Edge begin to wiggle their way out to dishonour a contract: 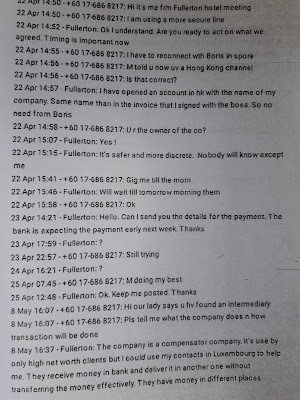 The contract is below: 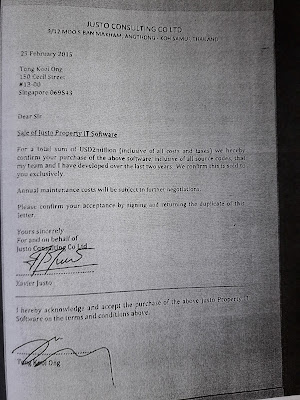 In the Whass App message between Clare Brown (under the name Athene Ban) and Xavier Justo (under the name Fullerton for their meeting point with Ho Kay Tat at Fullerton Hotel, Singapore), names of Tun Dr Mahathir's boys is mentioned

Just to say, the decision to leave Mahathir was not done blindly. There are many more reasons. It points to his not so pure and dishonest intention.

Ho Kay Tat should not hide behind the technicality of the law but explain for sake of transparency and public interest.

Was he and The Edge in-cohoot with international media and enemies of the state to bring down a democratically elected government?

Otherwise, he will lose his credibility and The Edge will be tak laku. He could hide behind the law but the document shows a truth hidden from the public. 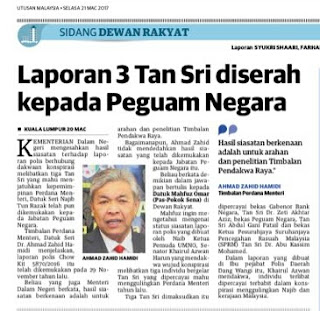 You use to say jho loh and shahrol should go down. You seem to be defending jho loh.

I miss the old sherlock Holmes....where is he now?

How can he not defend jo low?
he is a direct associate of the person who laundered billions into our country (No names included :) )