Royal support against corruption and abuse of power 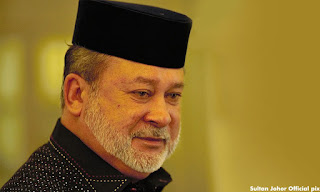 His highness Tuanku Ibrahim, Sultan of Johor gave both the blessing and support to MACC to carryout investigation and subsequent course of action. As reported by The Star here, his highness said the palace will not interfere nor protect anyone.

This is in reaction to the arrest of a Johor exco member, Datok Abdul Latif Bandi over land scandal as reported by The Star here. Last week, his son, officers, a lawyer, two developers, and another suspect were detained and money in bank accounts, luxury car and motorcycles were seized.

His highness is believed to have made the statement after receiving an audience from a top MACC official of MACC at the palace.

The Johor MB exhibit the same attitude as his highness to leave it to MACC and honour the maxim no one is above the law. It is exemplary attitude to be emulated by the rest of the country and across the political divide.

However, corruption is not to be politicied as Lim Kit Siang and Pekas Nenas DAP state assemblymen Yeo Tung Siong attempted. Cases under investigation and in court should not to be abused for political mileage.

Corruption is not an institutional practise but individual weakness. The aggresive effort by MACC to combat corruption will be beneficial to both BN-led federal and state government, and also Pakatan Harapan and PAS led state government.

Last week, a group of pro-UMNO online activists were upset with a statement made by MACC on graft complain involving a member of the UMNO Supreme Council involving fund for software development from MCMC.

If the allegation does not involve his role in a political party, it is improper to make reference to his party. It should have been the capacity his alleged action done.

Nevertheless, it is also improper of the online activist to become vindictive to successively attack  MACC's investigation and question their professionalism and integrity. It shows short-sightedness and wilful immaturity.

Publishing one or two or even ten documents do not make a legal case as it could only highlight the same issue of law. The Sabah watergate case requires sieving through 12 tonnes of documents. To many, finishing a book a week is a tall order.

In Parliament yesterday, FMT here reported Shafie Apdal trying to politice the case to question why the charges made were for money laundering and not corruption. This is not his first attempt to deflect his sin.

Corruption cases can be charged for corruption or criminal breach of trust or the most powerful weapon is money laundering. The law on AMLA should be tightened so that the burden of proof should be on the accused to explain his unaccounted wealth.

Since Shafie is playing politics, maybe he could explain how a mere captain of a karaoke lounge in Kota Kinabalu by the name of Peter Anthony could rise to be a Datuk?

Suppose one can throw a stone and hit any Dato, how come he could corner almost all KKLW contracts for Sabah involving water, electricity, roads and maybe solar by the hundreds of million ringgit, if not billon via proxy companies?

What engineering education or professional experience does Dato Peter Anthony have?  If not, what and how many years of business experience to enable him to manage the many contracts?

Suppose he is a fast learner, genius and gifted acumen, then Shafie should explain why is he is the main financier of Parti Warisan Sabah?

One plus one equals two. A smart manager could make it three. But we know what you did with a former MACC top official.

Attack by UMNO is part of politics. It proves nothing but there many skeletons in Shafie's closet.

And yet, Zam defend his right to aspire to be Sabah CM. despite Shafie's denial. Shows how shallow his understanding of current Sabah politics. Too old, out of touch, and living on past laaurel. So stick to cheap crucifix on tengkolok politics.
at 3/10/2017 09:13:00 PM

Why shoud he come out saying the palace will not interfere? Was anyone asking? Now that is weird

Not politicising corruption investigtion? What iS this about Shafie Apdal? I had hoped for a more even treatment from you. Sad