Is The Star sabotaging investigation of underworld Tan Sris and Dato Seri? 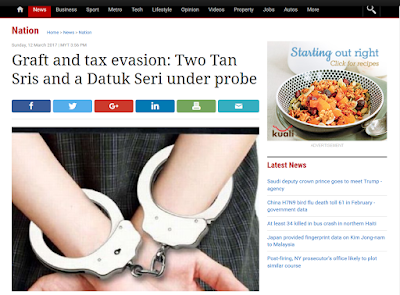 Believe The Star may have sabotaged investigation by NRRET-led team into tax evasion by giving details in their report:


The raids were said to have been conducted in Penang and Johor, with more details expected to be revealed soon.

The two Tan Sri businessmen are from Penang and Kedah respectively, while the Datuk Seri is from Johor.

More details than necessary as The Star revealed below:


It has been reported that one of the businessmen allegedly ran an illegal gambling syndicate throughout the country as well as nightclubs that opened past operating hours.

The authorities are also looking into whether he is linked to triad activities and are investigating how he has managed to be protected.

This Datuk Seri businessman, with at least four nightclubs and 23 entertainment premises, was investigated three months ago. Sources said he was called up again recently for questioning.

The authorities said he was allegedly linked to triad activities, and that they are also probing his links with powerful personalities who are now retired from government agencies.

All the top officials from the joint investigating team have declined to confirm or deny details on the high-profile case.

It is reported that the Datuk Seri businessmen allegedly gave bribes of more than RM1mil a month to enforcement officers from various agencies.

One of the other three businessmen reportedly used a proxy to buy Malay reserve land at a cheap price before selling these lots to the Government for a much higher price when they were needed for development projects.

The Star is MCA-owned but it is infested with DAP supporters and sympathisers all the way to the top post.

When asked of this with any MCA politicians, they absolved themselves by claiming they do not control the newspaper and allow journalism to be practised. 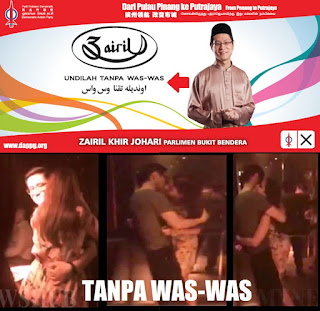 Yeah sure ...it is as if it was not married Zairil and unmarried Parliament aspirant Dyana Sofea frolicking on the dance floor in a nightclub.

In this case, The Star seemed to be sabotaging the investigation by revealing too much. It is known that the underworld in Penang, Selangor and Federal Territory are linked to DAP.

Does it mean the Tan Sris and Dato Seris are contributors to DAP thus operatives in The Star have to sabotage investigation by revealing details for suspects to run and DAP saved from another corruption embarassment?

Coincidentally, more than 180 DAP members in Malacca resigned from the party and many more is said will resign.

There is always the likelihood that someone within the NRRET or more likely, the participating agency leaked information.

Action must be taken.

Quite sure there is a law under the penal code to address this act which is similar to obstructing public officials from carrying out their work.

Wong Chun Wai should be answerable to this. He practically owned The Star, not MCA