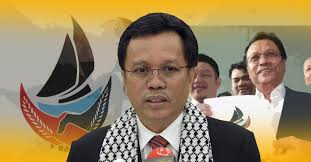 In politics, a war chest is funding obtained from donors well in advance of a campaign, usually accumulated by an incumbent for either re-election or to contest a more advanced office, or provided by a wealthy candidate to their own campaign. The possession of such excess funds may discourage otherwise viable candidates from a primary or general election challenge. - Wikipedia

Underlying the 1MDB issue being propagated by DAP and Tun Dr Mahathir is the issue of political funding.

Before the last general election, Mahathir had a meeting with the IPP owners in Buenos Aires and they were complaining of 1MDB nationalising IPP.

The intention was to tell Dato Najib that "you can be President but I am still in control of UMNO war chest".

Mahathir passed to Pak Lah only enough money for the 10th GE but UMNO assets were not transferred to Pak Lah.

When Mahathir realised Dato Najib received donation from abroad, he was sore and decided to teach him a lesson for able to out smart him.

Mahathir decided to use 1MDB as the issue to take Najib down despite no money was lost. It is unlike his long list of financial misadventures that a former Wall Street Journal reporter estimated may have cost the country some US$100 billion.

This time he was willing to work with opposition, foreigners, those he dubbed as enemies of the state, and even George Soros, the man he vilified (via Sarawak Report).

After playing the 1MDB issue long enough, it has become stale.

Slowly but surely, more so as the recent visit by King Salman, more of the public will realise it is but another hoax propagated by opposition like Lynas, 300,000 Bangla Deshi voters, failed and bankrupt state, Rosmah's diamond, etc.

If Malaysia had flicked Saudi's money, why would Saudi King do a state visit when they never did during Mahathir's administration?

More so, Aramco invested RM30 billion in a JV with Petronas in a RAPID of Pengerang project.

Off course, the pentaksub and diehard will never believe. Their faculty to think have stopped working. They believe everything the old man say, which when he put his political cap on, he lies and U-turn.

Since they raised issue with Najib receiving political donation from abroad, Najib proposed regulating political funding with a law.

Immediately the opposition parties cornered and diverted the issue elsewhere but clearly, they do not agree.

Back in 2012, NST made an expose of political funding for opposition leaning NGOs. Read also Nile Bowie expose here in 2013.

Its an open secret that PKR has their war chest parked abroad in Indonesia, among others.

PAS source their funding from the Middle East, likely the Brotherhood and some oil sheikhs.

DAP received funding from PAP Singapore since the days Singapore was expelled from Malaysia in 1965. Not sure whether the money went into DAP's account or somebody else's pocket.

Since DAP and PKR tookover Penang and Selangor, corruption activities to raise money for their war chest is an open secret.

It is just a hunch but two recent postings here and here on corruption, tax evasion and money laundering may have something to do with political funding.

Basically, the propaganda to accuse Najib on the 1MDB issue is to divert attention from their own corrupt practises.

Dato Shafie Apdal too is strongly believed to be linked to the Sabah Watergate.

He tried hard to deny, divert the issue to Dato Musa Aman and Tan Sri Joseph Pairin Kitingan. Recently in Parliament, he questioned why are the Water Department Director and Deputy Director charged under AMLA and not MACC Act.

AMLA still need some kind of link to corrupt act.

His modus operandi is rather common and that is to award contracts to his bag ñead on here.]

Both manner by Shafie are quite common modus operandi which is to place it with a personal trustee.

However, recently there is a new modus operandi at work used by corrupt opposition to stash money for their war chest.

It still involve a trustee but the trustee is someone most unlikely one would suspect.

Investigators will likely pursue and check the accounts of the inner circle but will find nothing.

Someone most unlikely one would suspect can be anyone and anybody. It is like searching for a needle in a haystack.

And the US$1.265 billion that was mentioned in a Singapore court case not so long ago?

Maybe that happened in a X-Files parallel universe?

Tony Pua is yet again whining about 1MDB and, as usual, Sarawak Report immediately picked up what Tony said and used it as a ‘quote’. That is their normal modus operandi. Tony will throw the ball into the air and Sarawak Report will ‘smash’ the ball and write its report as if Tony’s statement is the evidence of wrongdoing.

Tony should learn from what the Russians said soon after the downing of Korean Airlines KAL007. The Russians said the world has a memory of just 100 days. If you want to make an impact action has to be taken within those 100 days. It is now more than 800 days since Khairuddin Abu Hassan made his police report against 1MDB and the 1MDB story is past due date.

Tony somehow has the impression that elections can be won or lost on single issues. If that is what he thinks then Tony is still wet behind the ears. Humans by nature are selfish. Their decisions are always made on the basis of what’s in it for me. And this is going to be foremost in the minds of the voters when they go to the polling booth in the next general election.

The 1MDB issue is merely a distraction. Pakatan Harapan is unable to tell Malaysians what they will do if they become the government. So they distract us by talking about matters that have no bearing on our future. Is Tony saying if there was no 1MDB Malaysia’s roads would have been paved in gold? The opposition’s strategy to win votes is to make the voters hate the government. And this is what the 1MDB campaign is really all about: a hate campaign.

Being mentioned is one thing.

What was it mentioned as is another?

Was it a fact presented as primary evidence or "said in passing" to suppliment more important evidence?

Supplimentary facts are not a major contention by defense counsel.

Conclusion without details is premature ejaculatiin. Thus the reason the devil.is in the details.

You're​ too late dude.the damage is done..