Unite and support, less talk and no more nonsense 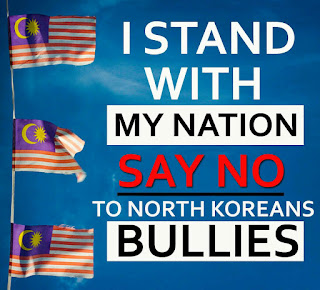 In a crisis moment like this, Malaysians should put aside race, religion, politics, and personal interest and opinion to unite for country in support of government effort to save the Malaysians held as "hostage by the North Korean government".

With the situation tense and delicate, we share the call by Rocky Bru here for Malaysians, particularly politicians to stop making statements and threats. This is not the time for politics, insults and smart alec.

It is comforting that opposition leader like Lim Guan Eng understand the need to unite and support the government in moments like this. [Video in this blog here.] DAP went further call for a joint-partisan Parliamentary "peace mission" yesterday.

The intention is good but it may not be that simple to execute. Blogger Husin Lempoyang here cynically highlighted the potential problems. It must best left to professional diplomats to handle as they are the ones capable at threading through the various diplomatic channels and the circumstances not known to the public.

As happened before during the Tandau invasion by Suluk terrorist, there will always be Malaysians saying the darndest thing without giving much effort and thought to understand before making any remarks. 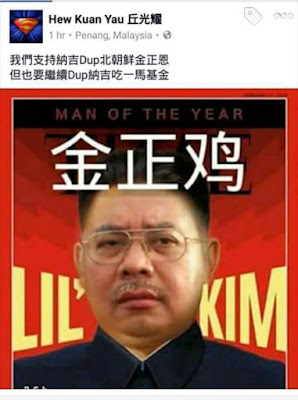 Superman Hew may not realised but the dictatorial Kim family resemble the Lim family more than Najib's family. 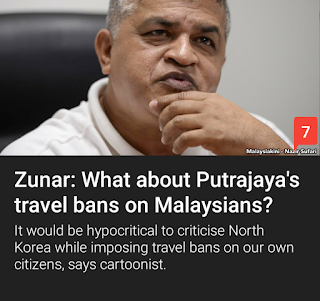 Can someone ask this cartoon-ist WTF is he talking?

This morning, one political activist question why didn't the government allowed the North Korean to jointly investigate the murder?

Yes, it is a political activist and mover at the grassroot. Obviously, it is our sovereign rights to investigate crime committed on our soil. It is illogical to do joint investigation with a party that is a likely suspect.

Then the response was to compare with MH370 and MH17. Obviously it is significantly different. One is a crime and the others are accidents and suspected attack by militants on a civilian aircraft.

One politician was asking as to why not evacuate the Pyongyang office first before announcing expelling the North Korean Ambassador.

The number left behind looks to be the minimal few personnel left. The embassy is not closed yet so there must be the last one around personnel. There must be someone to burn documents and honourably lower our Malaysian flag. 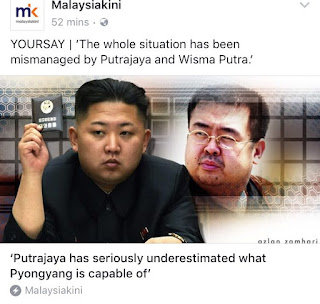 At least, there is smarter arguments in Malaysiakini's in MySay today here.

Unfortunately, the comments published were merely to criticise Putrajaya and accused the government and Wisma Putera as underestimating Pyongyang, mismanaged the situation and incompetence. Typical blame game, instant noodle diplomats, and hindsight experts.

There are those that viewed Wisma Putera as reckless. However, it is non-expert views that are also doing blame game, instant noodle diplomats, and hindsight experts.

It was not too long ago that former diplomat Dato Dennis Ignatius felt Wisma Putera was not firm and too slow in their actions. What would have happen if Wisma Putera had heed Dennis suggestions? Will the reckless blame and responsibilities fall on him or government? 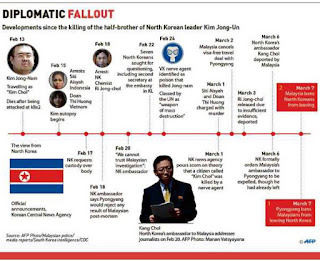 It is no fault of theirs that North Korea insist on acting in an unfriendly manner with the few country in the world with diplomatic relation with them.

To answer the blame that Dato Najib had not thread the rouge state carefully, perhaps they should know that the diplomatic relationship with Pyongyang was established in 1973. 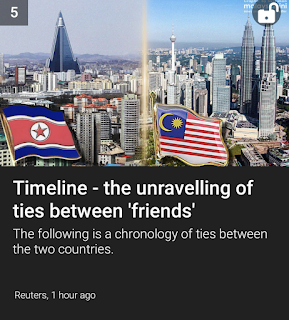 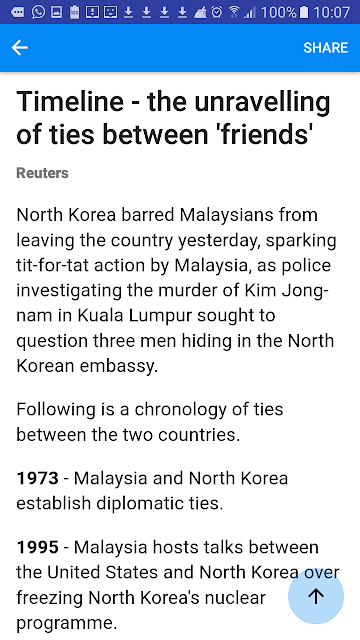 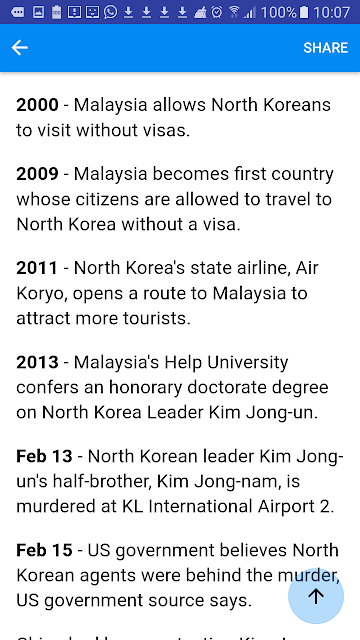 It was a former Prime Minister which the opposition now adore and keenly supported by Malaysiakini and their readers and commentators that heightened relation between Malaysia and North Korea.

Malaysia played hosts in the talks between the United States and North Korea over freezing North Korea's nuclear programme in 1995. Subsequently, as a slap to the Americans, the much adulated statesman of the opposition allowed North Korean to travel to Malaysia without visas in 2000.

In 2013, an opposition leaning institute of higher learning, HELP Institute honoured Kim Jong-un with an honorary doctorate. The Malaysiakini report from Reuters here did not mention the field, but will not discount contribution in the field of terrorism. 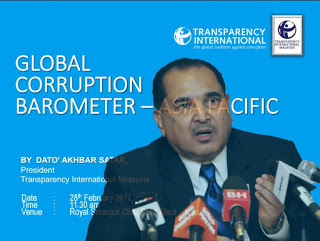 HELP Institute is the employee to the Transparency International Malaysia President, Dr Akhbar Satar. Yes he is the one this blog described in the posting "Most stupid survey and statement ever from a TI-M President".

Why he not comment on the Agong speech in Parliament yesterday: 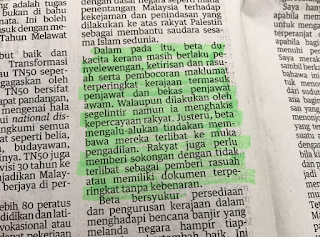 but manipulated his latest perception survey to rundown MACC despite acknowledging much effort of MACC under Dato Dzulkifle?

Maybe he is picking up a trick or two in the game of deception from the North Korean. If he cannot be honest with his analysis, views and statements, it means he is prejudicial and have ulterior motive thus have no credibility to speak. 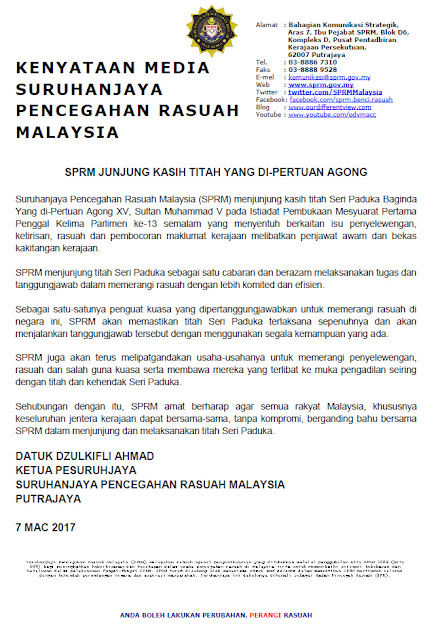 Perhaps it is time to comment on the latest effort of MACC and their actions.

Be it on the North Korean or corruption, less talk and no more nonsense. Instead, unite to give support to good efforts!

Bravo! Good verbiage! So, what's your solution to this impasse? Seeing as one party is classified as a "rogue state"?

As for corruption, the latest Transparency International report ranks Malaysia as having a 23%"bribery rate (China 26%,Indonesia 32%,India 69%,S Korea 3%) and 59% who think the level of corruption has increased in Malaysia (China 73%,Indonesia 65%).

No doubt you may have a different take on this.