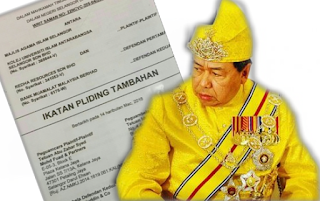 Over the weekend, viral were pictures of Tun Dr Mahathir in Johor Baru giving a defiant pose against the Sultan of Johor.

At the tail-end of his life, he is ready and willing to openly take on the royals. He has often poke fun at the royals, whenever he goes through the Malayan Union routine in his speeches at political rallies.

In a speech in London near the end of his premiership, in which a student asked when he will resign, he told the audience that Malaysians can be anything but "jadi Raja".

The brave student was not Khairy Jamaluddin but son of a Putrajaya official then. History of that incident need be corrected.

At the same time, historians need to re-look their analysis of Mahathir. His past actions to do constitutional amendments could be more than to curb royal abuses.

It maybe something imbedded in his psyche similar to his need to shame Singapore with a crooked bridge as symbol.

However, this posting is not about royal misbehaviours or Mahathir, but financial mischief made under the name of the Sultan by a religious state institution.

One have heard of name throwing of the Prime Minister's wife, but when checked, it turned out to be untrue.

Can it be checked when the name thrown is a Sultan? 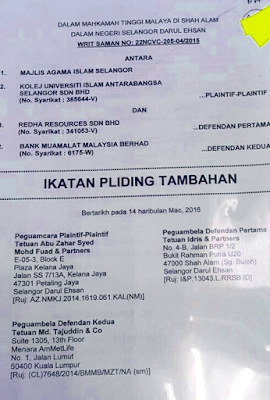 The source came from within Selangor court, but the legal case is true (as per the document above). Upon much digging, this was what was found.

In 2006, Majlis Agama Islam Selangor (MAIS) awarded a privatisation contract to built, operate and transfer (BOT) 3 blocks of hostels to Redha Resources (Redha). The hostels are to be rented out to students of Kolej Ugama Islam Selangor (KUIS), a higher learning institution established under MAIS. The BOT contract is for 33 years.

Redha raise financing and they did raised RM125 million from a consortium of Banks with Bank Muaamalat as facilitating agent.

The hostels were constructed, and Redha managed and operated the hostels. KUIS passed the rental collected from students.

In turn, MAIS gave a payment guarantee to the Banks. They agreed to top-up any shortfall in the event the rooms are not taken up. However, they do not need as it is 100% full. Good investment for MAIS.

This problem had Certificate of Fitness (CF) as point of dispute or excuse of non payment.

To justify not paying, MAIS officials threw the Sultan's name as though there were a royal decree not to pay. A royal decree would have justified cause but thus far, this one had none and is in contravention with fair practises of commerce.

Prior to getting financing in 2007, there was a pre-constuction meeting held in 2006, which involved the banks and local authorities. The authorities gave their words that the plan and design are okay. There will be no problem to get CF.

With those commitments, Banks agreed to finance. Banks have been disbursing the along the progressive claims.

Government being government and it is quite typical of Malaysian civil servants, state or federal, they requested more condition in 2008 after the hostels were completely constructed.

So no CF was issued yet. Throughout 2008 to 2012, Redha and their consultants were working on the CF. The most difficult one was the fire department i.e. bomba.

Despite no CF issued, MAIS still rented it out to KUIS students. From the initial number of 3,000 students, it increased to 6,000 by November 2012.

In the midst of working on the CF, MAIS raised the issue of CF with Redha. It was explained and shown what was being done.

But MAIS threw the Sultan's name to claim they were instructed to terminate the contractor.

It is surprising and cannot be true for Sultan to not understand business practices.

Tuanku Sharafuddin was shareholder in Killinghal Tin Berhad, who in turn was major shareholder of the former Southern Bank Berhad, and many other business ventures.

On December 2012, MAIS stopped payment to Redha and subsequently, Redha could not pay the Banks. But MAIS still rented out the no CF hostels to KUIS students and money goes into MAIS coffer.

Not comfortable with the dispute between MAIS and Redha, KUIS offered a resolution to takeover the hostels as in to buy it over. Redha was to be compensated.

They use the excuse they have been paying for hostels that had not got CF. If Redha had not allowed the hostels to KUIS, the students will be without living quarters.

Furthermore, the agreements with Banks do not require obtaining CF as condition. Otherwise, it can take forever for CF to be obtained and no property development with bank financing are viable.

In the meanwhile, Redha and the consultants continued the process to obtain CF. Recently, in the midst of hearing, believed on the second day, they obtained what people in the construction industry called a Borang F from the Kajang local council thus Architect could issue a CCC.

With it, CF can be issued and MAIS has no more case. There is no more reason for MAIS to hold back payment. Since stopping payment, MAIS have been collecting almost RM52.6 million of hostel rental from students. However, they insist not to pay.

Furthermore, MAIS refused to withdraw the case. In discussion, it is heard MAIS raised question and doubt on how the CCC or CF could be obtained just in time. That should be beside the point, isn't it?

The power and authority of the Sultan in state and religious matters, including his highness discretion in MAIS is clearly stated in the law and constitution, federal and state.

It is unthinkable and preposterous for MAIS officials to claim his highness commanded on a religious institution to default on a commercial agreement.

The MAIS council members are not made up of any politicians, BN or Pakatan, for any possibility there is political motivation or corruption by politicians. They comprise of top state civil servants, state police chief, state Mufti, members from the Royal Council and Sultan trusted professionals.

There are various implications but royal mischief is not. It could be civil servant mischief. But, it has yet to be ascertained.

If there is reason for their actions, it must be justified by reasons and not throwing the good name of his highness. As a religious institution, they should set good example.
at 3/06/2017 10:09:00 AM

"History on that incident need be corrected. At the same time, historians need to re-look their analysis of Mahathir. His past actions to do constitutional amendments could be more than to curb royal abuses. It maybe something imbedded in his psyche similar to his need to shame Singapore with a crooked bridge as symbol."

i never thought this day would come. my friend used to say, "jgn ingat dalam serban tak der duit bro!" wakaf desa fahmi once took them to court as well, and won...

Quite typical cap bunga pemakan rasuah. Jumpy when the truth of their berhala pemberi rasuah is revealed.

When you mentioned your source is selangor court, is it royal court or legal court?

Didn't see anywhere in the article that the Sultan was faulted. But it was alleged that MAIS was using the Sultan's good name to justify their really MEAN means.