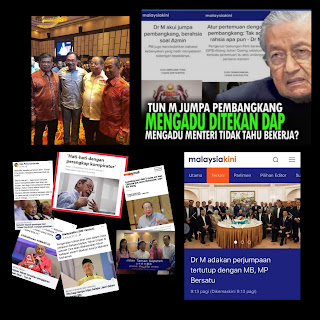 In his FB, he casually wrote below:

It’s sort of “Do we push the ‘panic button’ or not” meeting of leaders-without-followers guild meeting, ekk??

But will he push the button? Or slice-by-slice salami tactic described in British sitcom, Yes Prime Minister?


According to the blog The Flying Kick, Mahathir is in desperate mode and using the Jawi/Khat issue to hijack Ummah Unity initiative by UMNO-PAS.

Satire blogger Husin Lempoyang wrote claming Lim Kit Siang felt something sinister behind the Jawi/Khat issue that saw both himself and Mahathir support the most unlikely of causes.

Kit Siang is facing backlash against his leadership. The Chinese media have stopped supporting the family.

He is also worried the issue will repeat the May 13 1969 incident. It means DAP's dream of absolute control of government snatched from within their hands.

The satirical blog posting was not squite humourous or cynical.

And, Mahathir see no humour in what is happening.

The air of desperation can be felt as Mahathir cancelled his trip to Fukuoka by citing adverse weather condition.

When Mahathir is desperate, he will talk to his enemy or victims. Will he talk to Dato Najib or Dato Ahmad Zahid Hamidi? 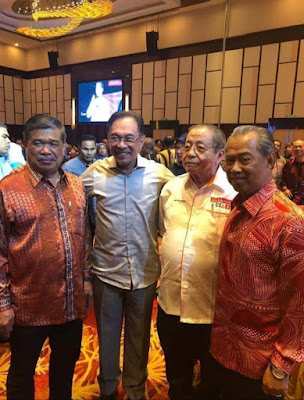 Mahathir been pulling all sort of stunt since the picture of all the PH leaders, excluding himself, appeared on Facebook in Kuching.

So it is not Najib or Zahid.

It is then followed by statements of support, but from familiar and expected voices of PKR leaders aligned to Azmin.

Hadi's words of support was propagated, but his stand had been to support Mahathir against any attempt by DAP and also Anwar to seize control of government.

While a vote of no confidence will not likely to happen in Dewan Rakyat. The Speaker and Deputy Speaker positions are aligned to DAP and Amanah.

Mahathir could pull a stunt to push for a motion of support to realise the number of MPs with him to justify staying till end of term. 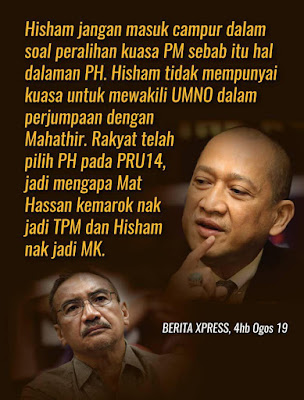 In the meanwhile, Hishamuddin is facing barrage of critics from within UMNO, including Dato Nazri Aziz for meeting without the party's mandate.

At one time, Hisham was believed to have 27 MPs willing to support him to "cut a deal" with Mahathir.

The question over his reluctance to run for UMNO Deputy President remain a mystery. He supported Dato Mohamed Hasan instead.

And Khairy surprisingly did not run for the vacant Deputy spot, but instead went for Presidency after getting Ku Li to run and hope to split Zahid's vote.

The number of MP going with Hisham may have shrunk since the Ummah Unity put together by Zahid is seen able to displace the PH government in the next GE15.


Malaysiakini spun it in the same manner in a quotation Mat Hasan supporter claimed to be fake news.

Talk is Hisham and Mat Hasan have been regularly talking to Tun Daim and Tun Dr Mahathir on their individual capacity.

No denial have come from Mat Hasan and it led the rumour mill to speculate Mahathir wants him as President for UMNO 3.0 he intend to create.

Recently, Mat Hasan cautioned against taking action on vocal leaders having diverging views from that planned by the leadership and agreed by Supreme Council

The numbers of MP seats for Mahathir is not known, but if Warisan and Muhyiddin with few PPBM MPs were to support Anwar, he is not likely to have sufficient seats yet to surpass 112.

However there are bloggers claiming he has 128. If so, Hisham could return as Minister.

So does other UMNO MPs. Mahathir is not shy to abuse the arms of government to preserve his politics.