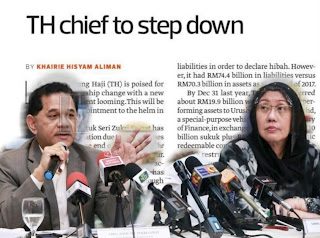 The fact not disclosed to the public is Zukri had angioplasty procedure. A former Minister said he had the procedure last May.

Angioplasty is not a major surgery, and a minor one in fact. It is just sending in the balloon to unblock blockage or narrowed arteries.

As a friend who had gone such procedure said, "It is not a long one. A matter of few minutes. Angio in the morning and you can go to office after lunch."

It is not encouraged by cardiologists, as they are the one doing the procedures and not heart surgeons. They would request a day rest before leaving.

It allows private hospital to make extra money from one more night of stay.

Zukri's resignation cannot be due to health reasons. He could have undergone his treatment without having to quit.

His heart condition is still amateur level and not yet English Premier League. It is not open heart surgery or stanting.

On Saturday last weekend, the day The Edge reported the resignation, we were besieged by friends messages with the following report: 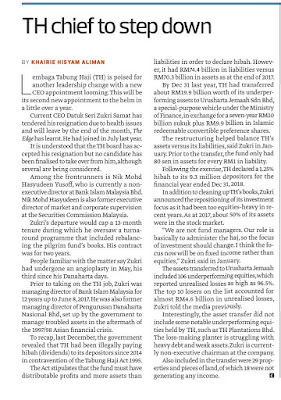 The Edge reported the same information posted last Thursday by this blog of Empress Dowager, Dato Zaiton Hassan pushing for an accountant friendly to her, Dato Nik Hasyudeen to be Zukri's replacement.

It is rather surprising that TH is still silence and requesting MMO and Malaysian Reserve to report the same one-week stale story.

It is a load of bullshit to claim Zukri resign because he could not give his 100% commitment.

Yati's message to fellow media claimed Tun Daim had nothing to do. Yeah sure ....

This information just came to our attention that Zaiton's appointment as Bank Pembangunan Chairman was made by Daim's brother-in-law, and Economic Adviser to PM, Dr Muhammad Khalid.

She is not Lim Guan Eng's appointment as he has some other stupid macai Melayu in mind that will follow to his wishes.

Despite having no corporate experience, Dr Mat Khalid or DMK as they refer to him in PPBM, it is an open secret that he has been meddling, interfering and messing up government agencies organisational structure and GLC's corporate affair.

DMK was the hand who appointed Zaiton and Zukri into TH.

Zukri would surely be asked to resign by Daim. It is not the usual Daim's standard of performance as Zukri had achieved nothing, developed no solid plan for TH, except textbook and accountant theoretical playbook to turnaround the organisation.

His Bank Islam playbook taken from his days at Danaharta is only to kitchen sink, blame game and victimise staff with investigations, making reports to police and MACC, and last card will be to do civil suit.

Zaiton and Zukri did it is Bank Islam, again in TH and same playbook by Zaiton at Bank Pembangunan.

No happening at Bank Pembangunan

After six months of ceasefire from The Edge on Bank Pembangunan, nothing is happening and they are back on the attack. 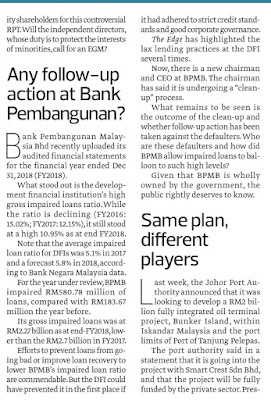 At Bank Pembangunan, Zaiton had choices of competent candidates to choose from, but she chose someone she can control in  Arshad Muhammad Ismail. 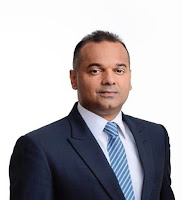 Arshad is a meek character and his face looks as though he has no confidence and Zaiton could eat him alive.

He would serve Zaiton's needs and style as Empress Dowager to be in control.

She will effectively be CEO and the real CEO merely follow her order, but in case of any trouble, fingers will all point at the poor lad.

TH should do solat hajat and pray Nik Hasyudeen is not another Arshad and Zukri that could be directed like Pu Yi. He should be able to stand up to the bitch and sincerely turnaround TH without her interfering hands.

The popular choice in TH and acceptable to the Rambutan Lil Alamin Minister, Mujahid Yusof Rawa is Dato Syed Salleh.

But Zaiton and Zukri have been making sure it is not him. Zukri must have worked till his heart weakened in trying hard to dig up dirt on him without success.

Apparently, the 20 police reports they fixed on former management of TH had uncovered nothing. In fact, police should investigate the two for withholding evidences and obvious attempt to slander on the innocent.

Daim may have realised Zukri's effort is time wasting and not productive in turning around TH. It should be done but not the priority and could have been done later.

Turning around TH and not disrupt TH's Haj operation is politically critical for PH and PPBM..

As for Nik Hasyudeeen, kawan tetap kawan, but we will remain as a critical alternative media man. More so, with a power crazy, control freak and arrogant kaki busuk maniac like Zaiton around.

By the way, Selamat Pengantin Baru to Ekin Rahman, daughter of Zaiton who got married last weekend.

Its confirmed to Dato Nik Hasyudeen 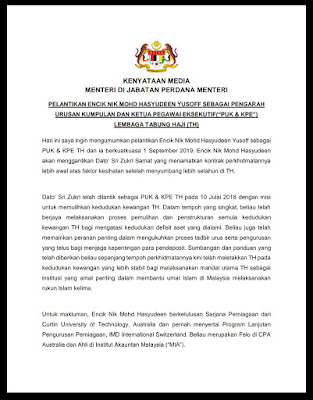 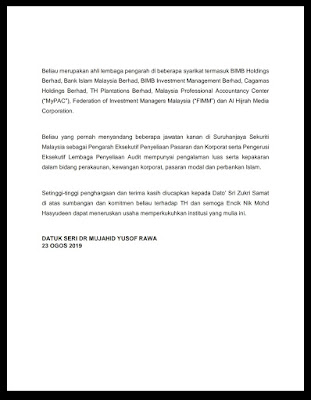 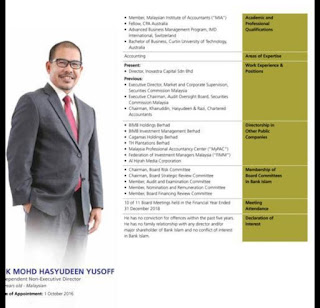 Hails from Kelantan and family of PAS members. Since aligned to the professional PAS faction, he may have signed or supporter of Amanah.

With TH asset placed under the SPV created by MOF's Prokhas. his appointment would smoothen dealings with Tony Pua.