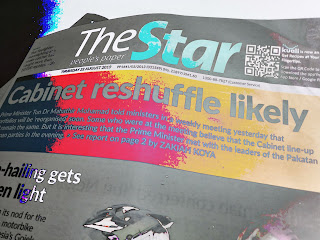 However, Daim and Mahathir could be putting up an act as they did during the late 90s-early 2000 economic crisis as a ploy to "reshuffle" their corporate implimentors. 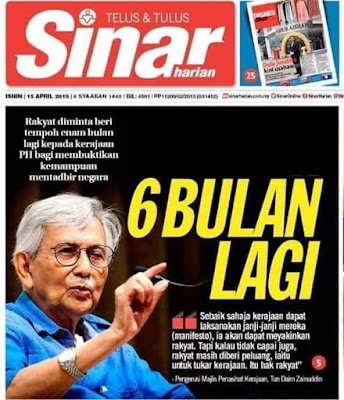 Daim had committed to claim in April that government will solve the nation's economic woe by October, which is approximately a month and half away.

It was next to impossible without a legitimate position of authority with Lim Guan Eng blocking his plans and Mahathir's habitual interference and unjustified wants.

The view then is Daim was not talking economics, but politics. There were then rumours of a major political move, which it will involve UMNO and as one senior reporter confided, it is possibly a new coalition.

Credit where it is due, Daim is more serious to revive the economy and fulfill campaign promises.

It affected his businesses and a revived economy means quick buck restructuring schemes and deals. However, Mahathir is too embroiled in politics, self interest, political legacy, and building castles in the air.

Part of the move is expected to be a cabinet reshuffling that could see former UMNO Ministers returning including possibly those claim to still be in UMNO.

The bigger expectation from Mahathir in order to draw support from UMNO MPs is to show he still have sincere intention for the first three Jawi alphabets and it must be expressed by removing Lim Guan Eng and Tommy Thomas.

If Mahathir dare, it could break-up PH. However, he knows DAP will not dare to lose power. They fear retribution that could land all of them into Sungai Buloh prison, beginning with Guan Eng.

But, will an increasingly unpopular Mahathr dare to do so?

As for the general public, Malay or even Chinese, sending Guan Eng in whether in Malaysia or extradited to China is good riddance to nonsense.

They expect not only cabinet deadwoods removed, but young buds  growing too wild and unwieldy get nipped. 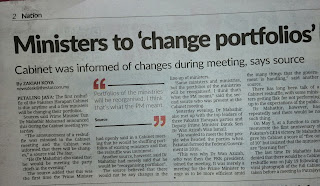 The Star report this morning is only to change portfolio which will be less than the public expectation of a complete removal of all the comedians suitable only as Parliament opposition bench.

Will Mahathir get to bring the frogs with the loud grumbling among PPBM leaders and grassroot supporters for not getting the benefits and perks as winning ruling party and the sacrifices they cclaim to have made?

At the same time bringing in ex-UMNO Ministers will only heighten the internal quarrel within PH and intensify the interparty rivalry, especially between Anwar's supporters and Mahathir's.

Political pundits expect Mahathir to flex his muscle by reshuffling cabinet and bringing those allied to him or willing to succumb to him.

But it is easy said than done. He need the endorsement of the other PH leaders.

Otherwise, they could pull the carpet from under his feet before he is ready for yet another political betrayal and could throw them under the bus

The discussion with other PH leaders will be done this week and announcement supposedly next week.

One can anticipate higher decibel disagreement, louder than the self initiated controversy on Jawi-khat, Dong Zong, Zakir Naik and Lynas meant as a reverse psychology game to regain support of voters segment.

It will only lead to further political move by Mahathir. More so, he has openly expressed his aspiration to have all Malay party "bersatu" under Bersatu.

In early August, Mahathir's back was already pushed against the wall and he has already gotten his messengers like Dato Seri Khairuddin Abu Hasan to talk to all political personalities from Perlis to Sabah, Lawas to Semantan, and all walk of political persuasion to convince them to support Mahathir.

There is not likely to be a vote of no confidence, but Mahathir knows only recently that his support has dwindled and he is not secure.

The video below proved this blog's claim that Warisan already switched to Anwar:


Even Tan Sri Muhyiddin and his men is expected to shift to his old friend from University Malaya days.

Among the crossed over UMNO MPs, Dato Ikmal Hisham is believed to be waiting for time to crossover again and this time to Anwar.

Khairuddin have been out of character to be extremely pleasant and hospitable with old political friends from all political divides. However, the feedback is his confidence is not believable and Mahathir is in trouble.

Where all PPBM leaders are generally silent and cautious in defending Mahathir, this Amanah member is the only one speaking out. Khairuddin condemned Anwar for not attending last night's meeting.

Recently, Khairuddin shot his mouth to Astro Awani to reveal he will be meeting Dato Hishamuddin, who muted the idea of a Majlis Perpaduan Ummah, upon his return from Haj. 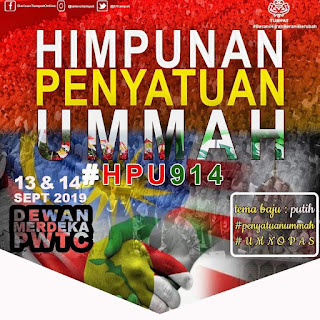 The blog The Unspinner anticipated in early August that Mahathir is planning to sabotage a planned go in white Himpunan Perpaduan Ummah organised by UMNO and PAS at PWTC on September 13 and 14.

Khairuddin confirmed what was anticipated to be the repeat of Deklarasi Rakyat to hijack Pakatan Rakyat with Majlis Perpaduan Ummah to confuse the public into thinking it is the same as UMNO-PAS event, thus Mahathir could hijack it.

Hishamuddin had expressed his regret for being accused as betraying UMNO and was behind plan intended to bring MPs to crossover to PPBM.

He said so at the official opening of UMNO Sembrong annual divisional meeting.

Though Hishamuddin expressed his commitment to UMNO, a former wakil rakyat of UMNO present in Sembrong expressed reservation to his overly defensive stance.

Hishamuddin was obviously holding on to dear life by latching on to the raft of Johor UMNO Liaison Chief, Dato Hasni to float him out of the mess he created for memandai (trying to be clever).

Khairuddin could be trying to implicate and pull Hishamuddin back into the controversy after failing to keep the MPs for Mahathir and got outmanouvered by Dato Ahmad Zahid Hamidi and Dato Najib.


However, Hishamuddin denial may not be convincing to UMNO leaders and members after The Unspinner revealed one of Hishamuddin man, Dato Abdul Rahman Dahlan is seen in the company with Khairuddin and a former UMNO Sabah member but now with PPBM Sabah.

It could be a casual visit by Rahman to welcome the return of a newly titled Haji and Hajah. However, with the reputation of Khairuddin and Rahman's political association, the close timing could easily misconstrue any meeting with such low life character, Haji or not, as political conspiring.

Hishamuddin was said to have had 27 MPs in his list to crossover, but the number has dwindled to 5 following the excitement over Perpaduan Ummah with PAS. Dato Mastura Yazif, MP for Kuala Kangsar, is one MP and closely associated to Hishamuddin that is heard to be crossing over soon,

UMNO grassroot generally welcome such intention as it helped cleanse the party of undesirables and uncommited leaders with weak resolve that are unable to withstand challenges and pressure.

The problem is they do not offer any advantage and benefit. These are the members and leaders UMNO does not need.

At the national level, Mahathir is in the same situation and hoping to rope in UMNO, PAS, other Malay based parties, and Sabah and Sarawak to save himself.

How could he do so with his unbridled animosity towards Najib and refusal to even bump into him at the Agong installation?

Maybe too embarassed that the SRC case is tanking all the way and 1MDB case could not even get started, still looking unprepared.
at 8/22/2019 03:07:00 PM