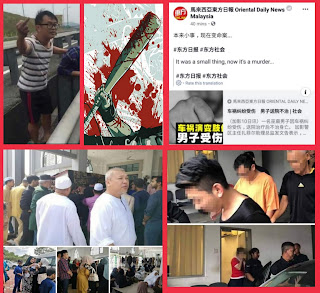 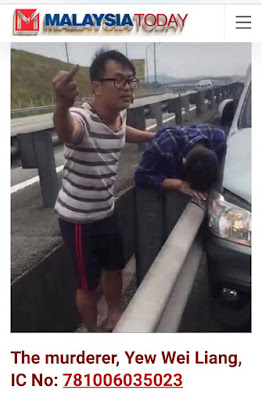 Why the Chinese driver resorted to such violence and defiance attitude is certainly something to ponder? 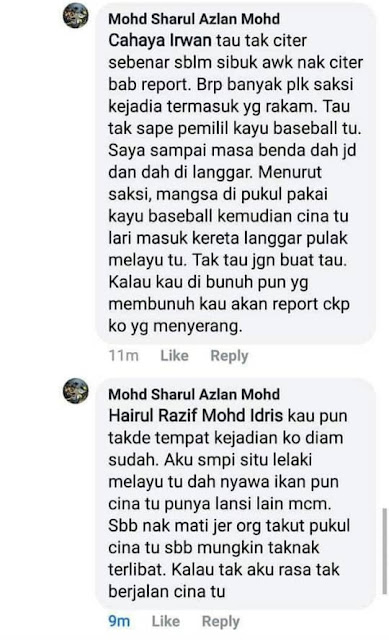 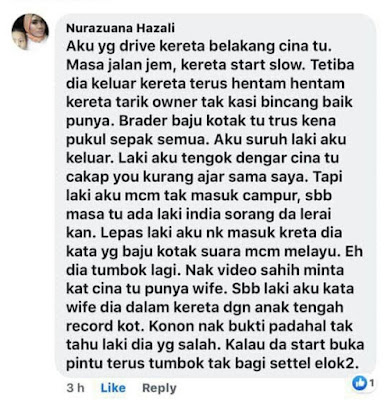 It does makes one intuitively suspect it is beyond anger.

But, a manifestation of deeply rooted racism and hatred towards Malays sowed by DAP's subversive and provocative politics of hate that has spread deep inside the psyche of the Chinese community.

If the anger was ignited by the recent Jawi and Khat issue, it is their own doing.


Somewhere and somehow, it is indicative of rising violence and anarchy to disrespect another fellow human and the law within the Chinese community.

One would suspect such belligerent attitude may have arise out of the belief that the law could not touch Chinese and non-Malay offenders upon their observation that the process of law could be conveniently abused by DAP-bias Attorney General to protect law breakers. 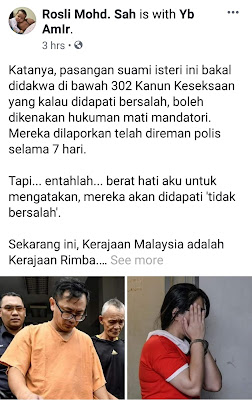 It is not impossible for Chinese and non-Malay law offenders to believe they could negotiate their way out of any offense.

It is obvious to the observing public that one could get away from allegation of rape as in the state assemblyman from Tronoh. Rumours going around is that AGC returned back police submitted investigation papers twice.

The allegation of murder of the late fireman Muhammad Adib saw th
unorthodox actions of a conflicted AG and naturally the suspicion is a cover-up. Tun Dr Mahathir's lawyer acting for the family of Adib already called for his resignation.

A prosecution for corruption with four strong evidences to link LGE in the bungalow case could be withdrawn and given acquital status by the judge.

An obvious case of embezzlement through feasibility study for a Penang tunnel but investigation NFA-ed.

There is a reclaimed island with development sold, which is supposedly form of payment for construction of tunnel, but feasibility study still far from complete.

Expect the same MO with the upcoming Penang Transport Master Plan which involve 3 islands to be reclaimed.


It is a remote possibility for the temperamental husband and wife turned alleged murderers to be Lim family proxies to divert attention. 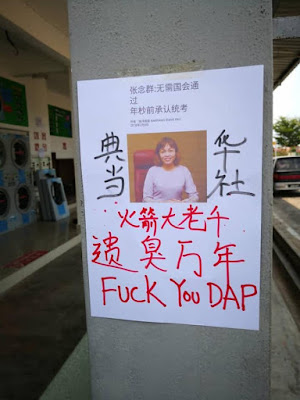 Currently, there is a string of unabated anger of Chinese and DAP grassroots towards the father and son Lims and their underlings Tony Pua, Ong Kian Meng, Teresa Kok, Teo Nie Ching, Yeo Bee Yin, Hannah Yeoh, and so on.

However, the way things are going under an anarchic Malaysia Baru, election promises can be broken without any sense of shame or apology.

And, House Speakers, whose role is to maintain order in the house, could override lawmakers.

Nothing is surprising any more.

Looking at his face and gesture in the video, the Chinese driver cum murderer was clearly overpowered by hate and bigotry against the Malay victim. This racist sentiment is becoming prevalent among some non-Malays since the Dap-led government took power, judging by the many obnoxious and abusive statements and postings on the social media against anything Malay and Islam. Many top Dap politicians are guilty of making provocative, demeaning and baseless accusations and statements aimed at the Malays at large but hiding behind the supposedly Umno's mismanagement of power. Their acts help to cultivate a sense of superiority and dominance among some non-Malays who now have the perception they own this country and can get away with anything and are untouchable.

You are just another Melayu that's full of cow manure.
Oh, Melayu is always the victim.
You have nothing other than 3rd hand information, and that makes a real convincing article??
Fucking retard.
And you wonder why we chinese hate monkeys like you.