Is this Anwar's face saving or final assault? 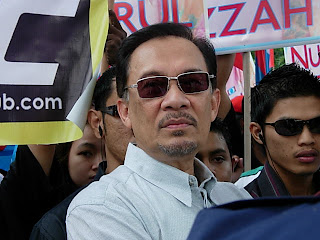 Since my last posting on the sodomy police report against report, Wan Azizah demanded assurance for Anwar's safety.

Anwar is temporarily holed up at the Turkish Ambassador's home and has filed a civil suit for defamation against Saiful at the High Court.

Najib has denied his involvement and clarified that Saiful came early in the year seeking help for scholarship through Khairil Anas.

And, the police has yet to investigate Anwar Ibrahim.

When Rocky posted the news of the sodomy police report on Sunday afternoon, an anonymous comentator by the name of Kamal had a view this is Anwar's desperate face saving move.

Another comentator, Imran posted in Kick De Fella blog a theory that Saiful Bukhary could be a plant in Najib's camp and this is the final assault before Anwar takeover Government. The basis of the argument lies in who gains the most from this episode.

Nothing like a good political thriller to keep us glued to the Internet. Wouldn't blame Zainal Kassim for being infuriated?

This could also be anwar's strategy to create a sense of deep and terrible crisis in the country. Yes, he is not a sodomite and I don't believe he is either and he knew that people do not believe it either. So create one so he could play victim.

He is caught in the middle. he does not actually have the 'numbers' to form the government and no way he could face the public and have an honest and serious debate with Shabery Cheek on the fuel price.

So rather than having to face questions from the public when the time comes to deliver on his promise which would surely undermine his credibility, create a crisis now and make himself the victim: that he has doubt of his safety and he needs the safe sanctuary of a foreign embassy.

Give me a break! Badawi, despite his weakness, is not Mugabe. In fact, we are witnessing unprecedented level of freedom and openness in the country. This is just Anwar's way to maintain public distrust towards the government.

I believe no member of the government would want to repeat 1998. In fact, i don't think anybody in the current government believe that he was a sodomite when he had to face the allegation in 1998. 1998 was Mahathir's people's doing.

Today's government knows that this kind of allegation will not stand in the court of public opinion. They know that the public will hate them more if they do this. Yes, Anwar is a political threat to them, but not threatening enough for them to lose power on 16 September.

Anwar has endured worse treatment in 1998 and he can afford to create such sense of treatment today. It is the sense of bad treatment that earns him public admiration and pity.

Come on. Anwar is a master politician who knows where his trump card is!

I don’t believe the allegation against anwar, and other allegations and slanders that have been running wild from both sides.

Prior to this, we saw the very systematic and professional strategy used to slander Najib and his wife. I guess Najib’s long experience in politics has prevented him from making serious mistake such as using his position to shut the witnesses’ mouth. The C4 is a strategy to insinuate him with murder.

I don’t believe this episode is BN’s engineering for the reason that the BN are very well aware of how damaging the 1998-1999 experience had been and to be using the same trick is plainly committing harakiri.

The accusation against Anwar is probably meant to slander the BN more than Anwar. The main target is likely to be Najib. We could already see that many Malaysians are pointing fingers at them.

I believe Saiful is part of the conspirator to damage BN. It is a plain wonder that pictures of him with Najib’s assistant, Azlina, Dato’ Mustapha could be produced in lightening speed. What more, it’s already in Wan Azizah’s phone .

I am not surprise if in the next few days, Saiful would return with admission that the allegation was false and was made under forced, by individuals that would insinuate Najib with the crime.

The allegation is a strategic approach that would result in a domino effect that would lead to another anarchic like episode, similar to what we saw in 1997-1999: the world economy in crisis; similar accusation leveled against Anwar; BN leader refusing to step down; BN breaking down; opposition gaining momentum

The question is what are the end points?

(1) Destroy BN for good. The 1997-1999 episode had weakend BN tremendously. This is the final blow that is likely to destroy BN forever.
(2) Unite the oppositions who are obviously beginning to show significant crack and also to soften the blunders of PR government
(3) Pushing oppositions into government
(4) Pushing the country into anarchy
(5) The final endpoint is to destroy Islam in Malaysia, being the only country where Muslims are progressive

I am not against other parties leading the government. However, the current pack, hurriedly set up, and if successful taking the leadership undemocratically, would not be my ideal government in waiting. Particularly, we could see how the representative of Islam in the PR had failed to represent the voice of Islam.

Who was then behind this? Think.

My closing word is stick to the fact.

The most plausible theory to-date remains that it is a clear cut criminal case that needs further investigation by police before it could become a court case.

I don't think such conspiracy exist.

This boy is probably acting alone, if he was truly raped, and as advised by police, made the police report.

Anwar's opponents (ie people in BN/UMNO/government) can't afford to endure another crisis like in'98, especially with the current BN/UMNO internal crisis. Things are so uncoordinated within UMNO/BN that such an orchestra is highly unlikely.

Any conspiracy/ploy would certainly begin with rumours, followed with a series of police reports, testimonials etc. Then there will be actors and extras. We should be getting this like weeks ago.

But all we have right now is just a piece of police report and conveniently, a death threat, timely revealed that made anwar scrambled into hiding. THAT'S ALL

What's wrong with facing the press conference that early morning. Who's going to shoot him in front of supporters and reporters with cameras and videos.

Maybe he wasn't prepared. So had to play victim by imagining a death threat.

Which is unlikely, coz if such event took place, the government is the one to be blamed for sure, and the public will ensure BN/UMNO be dragged down.

Nobody is gaining anything from all this.

It could also be a plan by Anwar himself.

There is no case,
the boy is paid to make a police report,
Najib is blamed,
Anwar's Turkish and other allies extend help,
PKR supporters get ready to go to war,
bystanders pour sympathy to Anwar for being being framed,
Anwar suceed in making Paklah and Najib being defensive.

One interesting outcome from this latest 'bontot' event is the cleverness of Anwar in diverting the criminal case against him. Anwar is known for his dramatisation of events, if he wants something or trying to get out of the mud. Another round of blaming the government i.e. police, AG, UMNO, BN, DPM, PM, etc for his crime against nature.

Remember the Baling case during his student days? Or the last trial - remember the arsenic poisoning? Remember the complaint about his back pain? Remember the dog collar that always stuck on his neck when he went to courts? Remember he moved about on wheel chair? Now no back pain or neck pain! He was cured as soon as he was released from jail!

Now the truth has come out, he went to the Turkish Embassy uninvited said the Turkish Ambassador. He just deposited himself there to get international attention. He got many friends outside Malaysia, who will believe him and make a strong outcry that his crime was fabricated. That's what Anwar wants.

By the way, who wants him killed? If that is the case, he should have been assassinated a long time ago! Even before the opposition could win many state governments in the last elections. Anwar is best described as the great Hindustani or Bollywood actor. Pity his wife Azizah, she has to defend Anwar because he is her husband although she knows Anwar inside out.

Mr Imran has said a list of things he did NOT believe in..how about what he believed in then? would like to hear his stance instead of watching him play ping-pong.

just too flimsy for the government to do something like this now, to risk the anger of the public again who, for better or worse, felt that Anwar was wrongly prosecuted in 1998. even more flimsy is the explaination from the PR side..they knew he was a plant all along??

Enough of politics. Politics have taken over Malaysians and Zimbabwe, I think. Come on everybody back to work. U know what? I have a new definition for politics. Politic is the art of perfecting nonsense with another nonsense. Agree?

i can't say that i didn't agree with those theory. it make sense. because why would the government using the same issue to frame him? it will look stupid to use the same thing over and over again. i do think that this is anwar's plan.

this is saiful ... a Malay College boy?