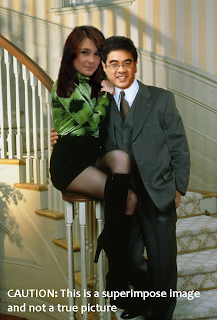 Last Friday April 13th, Secretary of one of MAS unions aka union with the "balls", MESSA, En Matdiah bin Mohammad sent out an e-mail to MAS Chairman, Tan Sri Mohd Nor Yusof and circularise to management, unions officials, etc.

This e-mail is consequent to another e-mail from union dated February 4th, 2012. [Read here]

In addition, ABITW received information that the reign of terror in MAS has begin to cover-up the incident and to find scapegoat to quite down info leak to YB Wee Choo Keong.

The Internal Flight Superintendent (IFS) on the flight is responsibile for carrying out her responsibility to record in the Voyage Report any happenings in the cabin during the flight, including movement of passengers.

On that that memorial new year Sydney to Kuala Lumpur flight, the responsible IFS, one named Joyce Tan was merely doing her job. She is being subjected to harrassment and enquiries by Danny's stooges.

She could be victimised by many carpet baggers of kaki bodeks (apple polishers) and kaki tikam belakang (back stabbers) survivors prevailing everywhere within MAS.

In MAS's Cabin Crew Department, there are several kaki bodeks officers and Manager, like Gunalan, Gerald Quinten, Chang, and few others, willing to victimised colleague and staff to get management's attention. Danny is in such predicament that their help will gain them promotions.

Danny was afraid that the Danny-Nanny scandal will leak to the press. So his denial was made in private in a MAS Town Hall meeting. Despite swearing using Quranic verses, it did not make his story any believable. [Read here]

Let God deal with this heartless scumbag of a liar because The Voyage Report with YB Wee Choo Keong would prove Danny lied.

The problem is Joyce is being victimised and accused by panels set-up by some kaki bodeks for leaking the Voyage Report when the report is accessible to a lot of people.

Anyway, why the fuzz over the leak report. It is like going after the messenger when the culprit is scot free. If not for the leakage, the true character of Danny is not known to Prime Minister Dato Seri Najib who after the general election, should be kicking these kind of bastards entrenching themselves in GLCs and claiming to be believers of market, neo-liberals.

Danny is trying to go around with an excuse that Flight Captain Mohd Yunos bin Ibrahim had allowed for it. In actual fact, it was Danny who instructed the Captain. Sorry Danny Boy, it still does not cover for an infringement on a February 2010 circular that disallow baby in the first class cabin.

Through this Danny-Nanny scandal, thank God, there is MESA, MAS Executives Association. All the other unions particularly, MASEU, the union for graded employee is only a peck of hen.

Although sounding brave in the media, President Alias Ali is a chicken shit coward. Management is holding his balls with an in-flight cleaning contract and he is hidded away quietly in Kota Baru. While, the manager's union, supposedly with access to more information on the crap going around, are sucking Danny's c*ck and all the way swallowing his scr*t~m.

By the look of things, Danny should be heading a secret outfit within the Prime Minister's Department Research at the assistance of Omar Rasputin Ong that is manned by heartless and emotionless robots.

Another equally capable, more specifically incapable with dealing wth humans, that Khazanah love to keep in their stable of incompetent Directors, to be considered to assist Danny will be Khazanah Executive Director and former Sime Darby EVP, Hisham Hamdan.

Off course we are kidding, but the point is these people can't manage and relate with human. If more clones of Dato Idris Jala is bred and reproduce, the Government should close up Institiut Jantung Negara. There will be no more heart related diseases in this country. In replacement, GLC CEO, policy makers and bureaucrats are heartless zombies instead of a people first Prime Minister.

Also another case of protected incompetent from Tan Sri Nor Mohd Yakcop's stable of protege that never learn lesson from mistakes but continue to repeat without conscience.

Union and staff with muted union representatives should not keep this under lid but keep voicing because Danny is a cohort with Air Asia to destroy MAS. No second opinion needed. See WAU and why WAU II is still being applied?

Are they so stupid as to not have other plans but only can think of WAU only?

Back to Danny, MESSA confidently took the bull by the horn and wrote the following e-mail to demand Rashdan to leave MAS due to his said disgraceful behavior on MH 122.

i guess, he is just being true to form.

like many melayu who are the sons and daughters of very senior civil servants, those who gotten the first pick of the cherry (the good schools, good teachers, good homes, scholarships, the travels, the molly-coddling, the titles, the connections etc etc), they rise up the food chain ever faster.

unfortunately these kids grow up feeling entitled, all laid out for them, the hard work has been done by the previous generation, the doors had been opened.

so whats the issue of the upgrade? i'm here, i'm the boss, i'm travelling with a baby, i'm a decent family man, i've worked hard the past few weeks, i'm on holiday, i've got a great plan for this company, so, i'm just taking whats mine. there are smiling faces all round, people bending their backs for me and the mrs, all lovey dovey and soon i'll be home, yeah?

EXCEPT that eventually its all unravelling now. the glue that held it together has vaporized before you, you did not really earned it, you were just a lucky guy, you had the silver spoon that were was never discarded, you never did any decent piece of work, you were winging it, your fine accent and grasp of the technicalities impressed many, until its time to actually do it.

so now the plebians wait and watch and see where this leads to. your friends will help you, you will once again invoke the family jewels and their connections, they will not believe this is happening to you, you were such a nice boy, and how could they do this to you?

and we shall see whether truth, honor, common sense, respect, decency is still alive in this country..

1.Thank you very much for this article.I know AMOK but I do not know that it is this bad.

2.I was sad when they cut TM into two - TM and AXIATA.I told Penarik Beca that this is a lousy decision made by people who don't understand the business..You take the most lucrative and big growth business,i.e. mobile and leave TM with a good bye business-landline.

3.Now I am seeing the same thing happening in MAS.

4.But what is sadder is this - the PM will do nothing to correct these mistakes of Khazanah ! NOTHING !

5.Anyway Mr.ABITW, please continue to expose more of these scumbags and may ALLAH swt bless you always.

It is no big deal in this situations. Changing or shifting passenger seats from one class to another. After all they are the bosses of the Company why the fuss. If one knows the standing order made by Idris Jala previously no one will make a brouhaha.
Danny just move on and don't worry so much.

A sure way to get him in more trouble. Its his arrogance that got him in trouble, aint it?

Currently the staff morale is very low and action should be taken to improve the situation quickly. The new management has FAILED in the fundamental duty of any corporate initiative, which is to galvanize support and get the buy-in from the workforce. They have FAILED to realize that it takes a large workforce to successful run an airline business and therefore cannot be high handed in the approach to turnaround the company especially since MAS has a workforce of 20,000. It also contravenes the 1Malaysia aspiration of people first, performance now.

As the sentiment for the share swap and the CCF is negative, no amount of plans and implementation rolled out from Management from this point onwards will bring positive results as the productivity and loyalty to the programme is already flawed and damaged.

you can express your holier than thou or what do i care for the staff n union views in other or past postings but not here.

Our blog thus our call

Write according to the topic.

We sense you condone danny.

Why are all these young half-baked guys catapulted to posts of CEO at GLCs without much in-depth evaluations.

And Redza, Danny's brother, a CEO at Pembinaan BLT (another GLC) is enjoying the benefits of cronyism.

Why not have stringent evaluation for posts of CEO at GLCs instead of parachuting half-baked, incompetent young guys to head these entrusted institutions?

I am pro-people, I am pro-honesty, I am pro-proper business governance.

I hate Singapore gloatings. You your country, Malaysia my country.

So why should I bother listening to boasting of Singapore (past, present or future) when I am concern in making a better Malaysia.

If Singapore is so well advance, why bother cybertrooping here in a Malaysian blog?

You are not sincere in your comments in this blog but coming to just pick a fight with blog owner.

When I have the time, I will remove all your past comments.

Jasper Bloodstone said...
This comment has been removed by a blog administrator.
10:04 PM

Bravo bro. These kiasus from singapore should just be sent to coventry. They loved it there. At business school, I used to have singaporean school mates who were true to form - completely obnoxious and boastings non-stop of their singapore. After the first three months, they spent the rest of their schooldays completely, truly miserable - ignored by virtually everybody, classmates etc. except the professors of course who were more often than not, oblivious to whats going on except their subject matter. For their arrogance, and "insecurity", these kiasus deserved to live a miserable life.