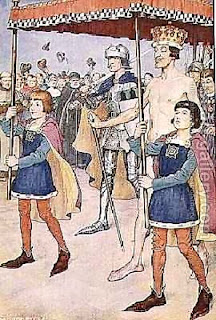 It was only two years ago that he questioned Khairy's UMNO Youth disinterest in speaking up on Malay issues. That void is taken up by Perkasa.

Khairy responded to say, “With due respect, Tengku Razaleigh is way off here. If that is the void that needs filling, I don’t want to fill it.”

This statement will come in handy when Khairy's performance as Chairman of PUNB in developing the Malay retail sector is scrutinise.

It is Khairy's subsequent remarks on his Twitter that is revealing.

John Pang was his former aide who now heads CIMB’s Asean Research Institute but questions have been raised of his background. He could be a fake. Read Malaysia Today here

“I guess without John Pang tweeting liberal thoughts on his behalf, Tengku Razaleigh is still stuck in a bigoted, analogue worldview,” Khairy added.

In the light of Khairy's past remark, what clothes is "old has been" wearing now?

Many friends in Ku Li's camp could be annoyed by that brutally honest label. However, we kept telling them that he is out of touch and still mentioning rubber and tin commodity market in discussions on the economy. 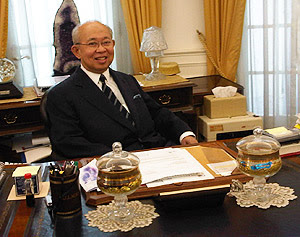 He's got no computer on his desk. His scheduler, Haji Redhuan's PC looks like an old 486. That can only mean he is not aware of the new frontier in the cyberspace and blogosphere.

The world is no more about access to information but applying information efficiently at the quickest of time. It is ultimately about ideas and ideologies. On this score, Dr Mahathir is far ahead in appreciating and anticipating such changes. 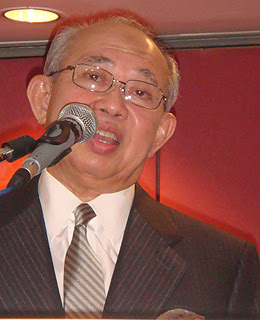 For quite a while, Ku Li have been playing games.

With the Perkasa crowd, he glorified the NEP. When invited by Tan Sri Ramon Navaratnam, British Graduate Alumni or one private college in Cheras, he carries a different tone. His NGO Amanah carries another totally different tune.

Note that we are quoting events we attended as to tell that we are aware of his thinking.

Of late, he has been talking in strange language and getting more out of touch, like saying Felda settlers will lose their land from FGV listing.

And this report on Malaysia insider below:

Only Captive Minds hang on to the NEP, says UMNO’s Ku Li

Tengku Razaleigh Hamzah resumed his attack on the New Economic Policy (NEP) today, stating that “captive minds” continue to support it despite Malaysia moving further from its objective of redistributing wealth through pro-Bumiputera policies.

The UMNO veteran said there has been “no intellectual inquiry” into why “despite many years of implementing the NEP, inequitable distribution of income continues to plague the people” as “we have become incapable of devising an analytical method independent of current stereotypes about Malays, Chinese, Indians and others.”

“Our thinking is based completely on a racial world view when it comes to matters of politics, education, economics, planning, and so forth. Needless to say, we promote a racial world view that thrives on the policy of divide and rule,” the Kelantan prince said at a book launch in Ipoh this morning.

Tengku Razaleigh, popularly known as Ku Li, had in February said “as a former Finance Minister, let me emphasise that it was never the intention of the NEP to create an incubated class of Malay capitalists.”

The settlement sum was undisclosed, prompting intense public criticism and attacks from the opposition over the right of taxpayers to know the amount of public funds recovered.

Tajuddin, 65, had served as the airline’s executive chairman from 1994 to 2001 and was a poster boy of former finance minister Tun Daim Zainuddin’s now-discredited policy of nurturing a class of Malay corporate captains on government largesse during the Mahathir administration.

Ku Li, one of the greatest critics of the NEP and Dr Mahathir’s handling of the policy, had challenged the long-serving prime minister for leadership of UMNO in 1987, which he subsequently lost by a narrow margin.

He said in his speech today that the country’s education system does “not encourage the moral and intellectual reform of the mind” resulting in a lack of debate on major issues such as good governance, corruption and rule of law.

“To this very day, the electorate has not understood the implications of the NEP which has produced results that are diametrically opposed to the original intention of bridging the gap between the haves and the have-nots. The longer we try the policy, the further we are from the original goal.

“The discrepancy between vision and reality has taken an alarming turn. It has gone far beyond economics into the realm of ethics and morality. In numerous instances it has taken the form of corruption and decadence which has pushed the economy further down the drain,” he said.

He said “wanton corruption and wasteful spending” had resulted in spiraling national debt that now amounts to RM456 billion or 53 per cent of the GDP, which “if we are not careful, it won’t take us long before we become another Greece.” 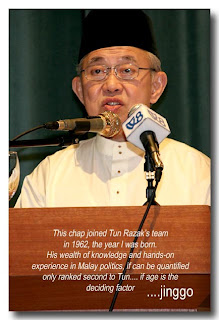 Below are extracts of an old posting dated May 23rd 2007 of Ku Li's speech here:

At the end of the posting, we highlighted:

A more extensive coverage of the event on Bigdogdotcom here. It will also revealed of how convinced Ku Li of the NEP that any form of liberalisation of the NEP was opposed vehemently. 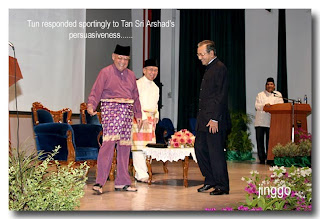 Tun Dr Mahathir was in the audience and he was invited to come up to give his comment of the title.

Everyone in the audience knows that part of the reason Ku Li was critical of Tun M that eventually led him taking on Tun M in UMNO party election and later convening a new party, Semangat 46 was Tun M's easing of the NEP.

The one in particular that Ku Li was sore was the abolishment of his baby, The Industrial Coordination Act. 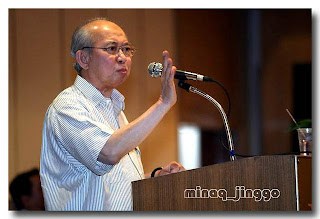 Subsequently later in 2008, Ku Li went around on a nationwide campaign to get division nominations is his bid for the UMNO Presidency against Tun Abdullah Ahmad Badawi, which the candidate turned out later to be Dato Seri Najib Tun Abdul Razak.

ABITW had tagged along.

His campaign theme then was of saving the Malays and rest of rakyat from Abdullah's neo-liberal policies, complacent attitude and reliving his corruption, croynism and nepotism slogan.

This new so-called liberal Ku Li is an oxymoron.

If Ku Li had changed clothes, it would have rendered his whole life political struggle and battle against Tun M as invalid. He'll have to swallow back some of his critics of Tun M.

And to a smaller extent that of Khairy. 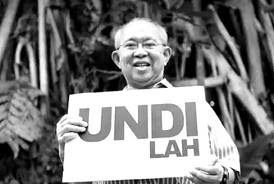 There can only be one explanation for Ku Li's attempt to have a fresh new image with presence on You Tube to encourage young defying voters to come forward.

Khairy revealed it below:

“Because I choose not to be part of a coup Tengku Razaleigh is trying to orchestrate, my support for the PM is dismissed as superficial.”

We have heard of it but we can't be believing Khairy's words.

At his old age, Ku Li can't be playing deceptive politics like his younger days. More so, when PM Najib extended an olive branch.

He allowed Ku Li to announce allocation for program he suggested for the Orang Asli in his constituency. Read mStar here.

The gentlemen we know in him should stop this futile attempt. He is too old to look cool in blue jeans and bizarre T -shirts.

We wish to maintain our respect for this stateman. But, we plead upon him to sensibly chart his retirement from politics, while he is still a "winnable candidate." Give way and groom younger leaders. For instance, Yusof, the current ADUN of Nenggiri is eager.

Ku Li could do a lot more to society than spending time in Parliament merely listening.

Sorry Tengku to have to say that sometime people around you are too overawe with you that they can't be honest enough.

You sounded grossly out of touch. On few occasions, you were like Abdullah sleeping in public.

And you didn't lose the few nominations you expected to get due to money politics. Najib does not need to spend and nobody did. The boys around you were merely speculating to cover their inadequacy.
at 4/02/2012 03:00:00 PM

That kind of immature and confrontational cooment won't get to see daylight. Reason to us why you disagree with us.

No need to be emotional and get personal in your insult.

Otherwise dont come to this blog. You are not ready for it.

Would be great if we could meet again to discuss this in a friendly and jovial manner but seriously for the the country's well being. Got time?

Maybe you have not been to Tengku Razaleigh's Office for a long time. Just came back from his office yesterday and I saw some hot new Mac stuff on his staff's tables. Would love to have them on my work table.

YBM Tengku Razaleigh is one time a highly respectable politician. He did contribute to the nation and its people once, when they were the days they were not enough good people.

However, his time is out and he overstayed his relevance.

In fact, he is grossly irrelevant with his thoughts on politics and economics. Like his recent comments on the FGV, which was captured by Harakah online, the basis was even factually wrong!

Ku Li did a disservice for the Malays when his followers caused UMNO to split into two, just because he failed in his bid to oust Tun Dr Mahathir as the Fifth UMNO President in a party elections exactly 25 months agao this month. Because of that, Kelantan was handed over to PAS for the past 22 years. Isn't that indirectly taking the Kelantanese Malays backwards?

Ku Li should keep the remain of what ever shred of respect the rakyat have towards him to back off and retire as a statesman. It would the best.

We should. Will find time.

The name Hood Osman in the list of those sued by Hong Leong Finance together with Faiz Abdullah's Arus Murni is Ku Li's man.