Laws and rights to Dataran Merdeka 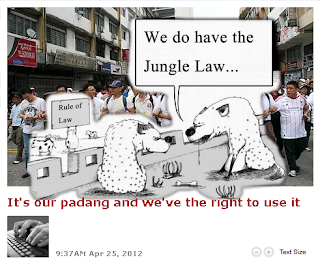 While googling for news, this statement appeared. "It's our padang and we've the right to use it."

One can read the Malaysiakini YOUR SAY discussion here. and try to give your opinion. The keyword is try because they do not welcome opposing views. It is heavily censured and only selective opinion released.

Naturally it is only their opinion that get released and opposing opinion will be released once the cyber troopers have ready an answer.

On Facebook, opposition cybertroopers are smart at crowding out opposting views and opinions.

So much for Bersih, 2.0 and 3.0 demand for fair media. Do these left leaning and liberal NGOs together with opposition actually practise so? Do they understand their rhetorics about free speech, self expression and transparency?

Can they appreciate the maxim "agree to disagree" means also to agree to disagree with Utusan Malaysia, Malaysiakini, The Malaysian Insiders, News Straits Times, The Star, The Edge, and so on. It does not say agree to kill, okay?

Now on that statement.

Bersih and many other demonstrations have the strong backing of Bar Council. These are practitioners of the law. The rule of law they demand. When such is the demand, it automatically means law and order. It means a society govern by law, rules and protocol.

Are the statement and accompanying arguments consistent with what they said?

Blog Pure Shiite did a good job on this to explain.

First, when these vagrants claimed Dewan Bandaraya Kuala Lumpur (DBKL) have no right to tell them no. Read Ambigau below:

City Hall says no, Bersih 3.0 to go ahead

“We are going to go ahead with it anyway,” she told reporters at a press conference today.

“It was a one-paragraph statement saying that our event was not suitable with the use of Dataran Merdeka.

Chin said the letter was signed by a Datuk Normah Malik, deputy director of management at City Hall. Read on here

SatrD here added that "Datuk Normah Malik may have overlooked some of the provisions in the Peaceful Assembly Act. From a very strict interpretation of the Act," even national level events can be conducted there. See the act below:

The location of the "place of assembly" for BERSIH 3.0 is near a place of worship. 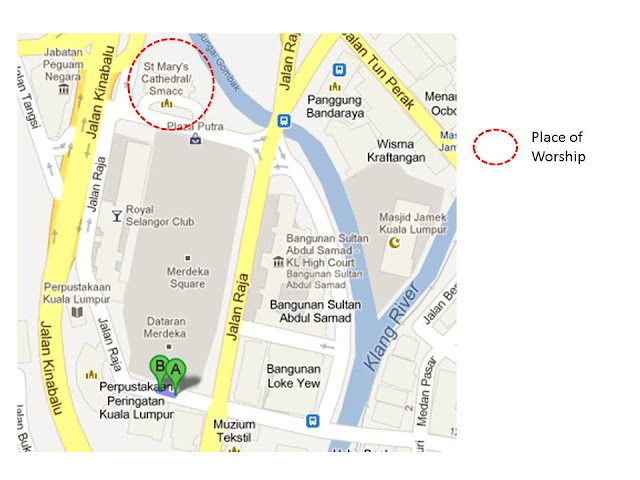 St Mary's church is within 50 metres of Dataran Merdeka.

Second, they claimed DBKL have no right to evict the campers from Dataran Merdeka. Read DBKL answer:

KUALA LUMPUR, April 24 — Kuala Lumpur City Hall (DBKL) has justified its clampdown on Occupy Dataran activists, saying that it had given the movement many “chances” before finally deciding to take action today.

This is despite the fact that legal provisions, specifically the local ordinances, gave City Hall the power to do so.

“We’re not using any new laws. The ‘undang-undang kecil Dataran Merdeka’ has been there for more than 10 years.

“We gave these people a chance before, gave them chances to stop it, to walk away. They did not heed our advice... so we took action today,” DBKL’s corporate planning division head Dr Ismail Stapa told The Malaysian Insider.

“The by-law has always been there, its just that we did not enforce it before today. Now we are left with no choice but to do so,” he stressed.

He quotes the by-laws below:

By-Law 4. Offences. No person shall, unless approved by the Commissioner in writing, in the Dataran Merdeka-(a) eat any food, drink or smoke any cigarette, cigar or any tobacco;(b) cut, remove, damage, pluck any leaf, branch, flower or seed of any plant or tree;(c) cut, uproot, dig, remove or damage any plant, tree or grass;(d) excavate or remove any earth;(e) climb any tree or structure;(f) dirty, deface, make alteration to, displace or damage any structure;(g) nail, tie, bind, chain, draw, scribble, paint, spray, mark, affix, inscribe, display, place or hang anything on any tree, plant or structure;(h) walk over, step or stand on any planting bed or shrubbery; (i) enter or climb the hundred metre flag pole;(j) ride, drive, pull or push any vehicle whether mechanically propelled or otherwise or slide with a skate;(k) contaminate or pollute the water in any fountain;(l) deface or remove any notice displayed by the Commissioner;(m) spit, urine or defecate;(n) displace, make any alteration to, remove, deface or tamper with anything displayed, exhibit, affixed, hung, placed, constructed or set up by the Commissioner;(o) erect any tent, booth, shed or other structure;(p) drop, throw, deposit, place or leave anything whatsoever;(q) kindle any fire or any fireworks or crackers;(r) lie down or sleep in any part of Dataran Merdeka; or(s) allow any animal which is under his control to enter or remain in any part of Dataran Merdeka.

By-Law 6. No entry at certain hours. No person shall remain in the Dataran Merdeka between 1 a.m. and 6 a.m.

By-Law 8. Prohibition against holding assembly, etc. without permit. No person shall unless exempted, hold any public address, demonstration, assembly, meeting, gathering or any other activity in the Dataran Merdeka without a permit from the Commissioner.

By-Law 14. Power to order out of Dataran Merdeka. Any person who contravenes any of the provisions of these By-laws may be ordered out of the Dataran Merdeka by the Commissioner.

By-Law 15. Penalty. Any person who contravenes any of the provisions of these By-laws shall be guilty of an offence and shall on conviction be liable to a fine not exceeding two thousand ringgit or a term of imprisonment not exceeding one year or to both.

If these vagrants and anarchist thinks the Malaysian law and order is repressive and one can simply do public protests and demonstrations in Britain, US, Canda, Australia and those so-called democratically advanced countries. Tell that to the Palestinians.

Even in a matured liberal society like Britain, there are clear of rules and authority for peaceful protest. See this phamplet written by an activist group. 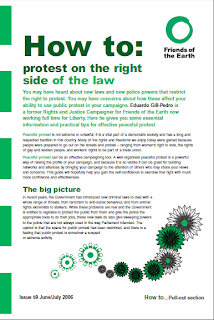 To quote back from Rocky's ole posting dated July 19 2011 here, there are rules like these to hold bersih 2.0 rally in Britain:

Check with Ginie Lim in London on how it was done.

Unless these people are anarchist who do not respect the law, no consideration for rules and order, and insensitive to the rights and freedom of others, the rakyat should consider them as trouble makers and deafened their ears to their hue and cry.

Ah heck, why bother arguing with these blinds?

Fourth, if they can't see all these foreign backers behind them like the chart below and they are merely developing excuses for neo-colonialism or recolonisation, they should not be allowed to participate in democrasy. 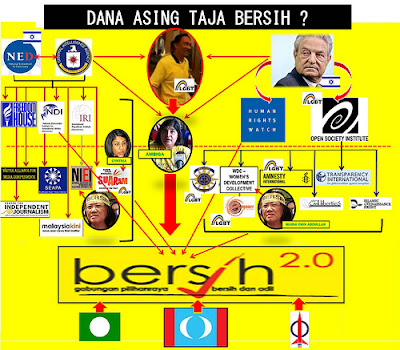 By right, only those who appreciate being Merdeka and believe in building a nation with some form of law and order based on guided and clear principals should be allowed to participate.

"The first thing we do," said a character in Shakespeare's Henry VI, is "kill all the lawyers."

Bro.
My view,why Bandar raya or the Govertment want to o against the gathering of Berseh 3.0.Let it be.Ambagia and The Berseh com like a stubborn kids.

Let them use Dataran Merdeka and if they want o give memo to agong,use police car to bring them o the Palace.

the government must not entertain any lawbreakers... we are so tolerant of them that it really gives the other law abiding citizen the puke...

Bro,
Goverment concession allowing them to march is a good strategy. Don't bite the bait as what they want is a controversy made for news man. If government disallow, government is playing into their game plan. They will still proceed and that will give them more mileage.
Just take care of the security of public properties and general public as a whole.
They will just get tired and go home after that. Avoid any possibilities that could generate unwanted and unruly incidences.
Police must be visible with a big smiles. We are much secured and matured to handle this event.

Bro,
Goverment concession allowing them to march is a good strategy. Don't bite the bait as what they want is a controversy made for news man. If government disallow, government is playing into their game plan. They will still proceed and that will give them more mileage.
Just take care of the security of public properties and general public as a whole.
They will just get tired and go home after that. Avoid any possibilities that could generate unwanted and unruly incidences.
Police must be visible with a big smiles. We are much secured and matured to handle this event.

Just let them go ahead. The best thing the gomen, its propagandist and its bloggers can do is to say nothing. They spend countless pages in print & internet trying to label Bersih as this and that last year... and only made fools of themselves.

If they break the law..throw the book at them. Failure to do so implies that the authorities are impotent to act against lawbreakers.

Be firm but avoid violence if possible. And I pray for rain, thunder and lightning this sat.

Just state your stand. There is no need for hostilities, insults and use bad languages.

We won't publish it too.

But we do appreciate factual and well argued comments, even how differing a view it is.

Concerts are allowed at Dataran Merdeka, but a peaceful protest is not.

This reminds me of many years ago, I saw an illegal Indonesian hawker shouted to the DBKL officers who demolished his stall at Chow Kit - "Dunia ni semua orang punya, awak tak boleh ambik saya punya warung".

If this is the mentality of the Bersih people, there is no way to reason out with them. Just lock them up in jail. Period.

there's no need to entertain any rally when the consequences could always be expected...

NO ONE CAN GUARANTEE ITS SAFETY. can you, any bersihjijik member?

these hooligans purposely created chaos & with proofs here & there, put them behind bars. ambiga & anwar must take the responsibility to pay back what their rally members had done & all should be condemned for causing damages to the public amenities & injuries to the police members...it's too much!!