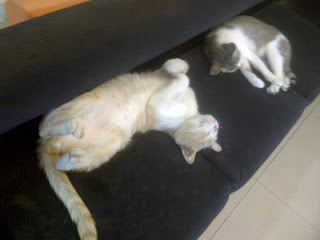 It's the time for long lunches or laze around the house that is not sufficiently occupied. Watch the tube or movie. Hear music. Sweating it out with a walk in some park or swimming in a pool.

Yes ... swimming more than 5 laps in an Olympic sized swimming pool can make your body warm despite engulfed in water.

Wee Choo Keong's latest posting here alerted us that MAS, a high technology company decided to return to the stoneage to ban the Internet.

What man Danny .... in this age, there are I-pad, Blackberry, Samsung Galaxy Tab, Tablets, I-phone and  Smartphone available to MAS staffs to access Internet. It is next to impossible to censure. Those Internal Circulation can still 'bocor.'

These 'outsiders' managing MAS have a real attitude. Instead of listening to BK Siddhu's repeated advise here to engage with the staff.for ideas, support and cooperation to turnaround the company, they seemed to get more draconian.

The thing that got us out of the lazy chair this Sunday afternoon is a new finding on the Danny-Nanny scandal.

These WAU team, remnants of Tun Dol Badawi legacy, got really no class. Tan Sri Tajuddin Ramli, who they conspired to demolish, pay for his personal travel on MAS even though he is entitled.

Let's cut through the chase.

Heard there was an enquiry made. All the parties were called in. Hopefully it is not set-up by those kaki bodeks described in earlier posting as prevalent in MAS. They are willing to lie, cheat and be sodomised to earn Danny's favour.

What's heard is the "management" was told by Danny that Nanny came over to the first class cabin to attend to the baby. Then she returned back to her economy class seat.

Heard management was not happy with YB Wee Choo Keong for exposing the Danny-Nanny scandal just a day before they were to do a presentation to MPs in Parliament. It distracted attention from their presentation and placed them in a defensive situation.

Our own enquiry and intel gave a different version. This is the consistent version amongst cabin crews and pilots

It was Danny that requested the Flight Captain Mohd Yunos bin Ibrahim to up-grade his Nanny and baby. When the baby was in the first class cabin, it cried and upset the other passengers.

There was no story of Nanny coming over to first class to attend the baby. No story of first class cabin being full. It is a lie and if it had come from Danny, then Danny lied.


Not surprising, these Tingkat 4 characters are quite capable of stealing and lying. Furthermore, they think it is alright and their god given right because Government sent to study at Oxford or Cambridge.

See his face. Square face ... impulsiveness and obstinancy. Half closed eyes ... withdrawn and sceptic. Only he is clever. His squashed nose resemble something, isnt it? It could denotes insecurity and superficiality. It means he could be a fake.

Let's clear something about the chain of command and the responsibilities of the important positions in a flight. During a flight, the Flight Captain is the commander of the aircraft and he is directly in-charge of the cockpit.As far as the cabin, it is the responsibility of the In Flight Supervisor (IFS).

The IFS for the flight is confirmed as Joyce Tan. If the enquiry report claimed anything personally wrong with her, then it is an outright lie.

Joyce is a disciplined, no nonsence IFS and uncompromisingly strict to the letter in her job. She knows and does her job well. Neither would she flinch to any pressure to change her Voyage Report. There is no issue or question of the Voyage Report being tampered or leaked by her.

As far as information leak is concern, it so easy to get information these days. Give it to any management to upset the staff with their hanky panky and nonsense policy. And either a key personnel or the staff will spill the bean whole heartedly.

That is why ABITW has been around long and the opposition is giving BN a hard time.

Now, the flight was from Sydney to Kuala Lumpur, thus the Voyage Report should be prepared and submitted immediately upon arrival. For long haul flights, the report is submitted when they return to base. For destinations like London, they'll punch in immediately into the system or maybe e-mail to KUL. .

Wonder how they will do it without the Internet installed. Apa la cost cutting by banning the Internet. So archaic thinking in this days of knowledge economy. It is obviously reflective of a paranoid insecure management. Better cut cost be cutting the mangement salary, particularly of dunggu Danny. 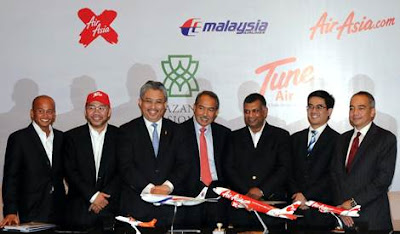 After several months on the job and consultants paid in the millions, the Tan Sri Azman Mokhtar-backed Danny and Danny-dominated management can't come up with a credible plan. They kept changing business plan and organisation structure after many months.

No wonder the executives and Managers outrightly told MAS Chairman, Tan Sri Mohd Nor Yusof in the first Townhall meeting and in Danny's presence that they do not want Danny to be CEO. This blog has said it from the beginning that Danny knows nuts.

The only way MAS can move forward without hitches and engine troubles (God forbid) is to work together with the staff. All those in the pictures above semua tak boleh pakai. The old WAU team of Tan Sri Azman Mokhtar, Tan Sri Mohd Nor Yusof, and Rashdan Yusoff failed and rose to level of incompetency.

Sure Mohd Nor Yusof is not as ruthless as the Bina tak tahu Fikir duo, Azman and Danny but he is subservient to another mean ruthless WWW wrestler, as in IBanker, Dato Nazir Tun Abdul Razak.

These buggers and MAS's unfair competitor Air Asia's Tony F and Kamaruddin are the ones screwing and sodomising the Company all over all through the years.

Before Ahmad Jauhari (AJ) came in, they put the CCF in a hurry. These f*ckers claimed that they won't start anything until the CCF was sorted out and signed.

Maybe the public does not know but the staff remember the QPR. Contract was given before CCF was signed.

Despite his audit to consultant experience in PW, Danny is but another Nor Yakcop's generated-in-a-hurry executives, whose never really gone through the mill. This is the very reason MAS staff and executives can never respect one after another of 'outsiders' fixing the pumpkin. It reminded us of Curry-in-a-Hurry in Midtown Manhattan.

The biggest sucker in this MAS-Air Asia CCF affair has to be AJ.

He must have been talked into to come out of retirement to help the nation. Pity because he came in with all these screw-balls already bought the inferior ingredients and spices based on a Curry-in-a Hurry styled recipe, but he is expected to produce a Bombay Palace dishes and profit.

All these talk of curry is making us hungry. Have to end this posting soon.

AJ came in with something the rest did not have. He had credibility and proven track record. And he has big ears. Many great man have prominent ears. His large ears come with narrow sharply defined edges. It shows kindness and a happy refined nature.

Heard he was called in by PM privately without Chairman and Danny. If he is now the person mandated to undertake the difficult task to turnaround MAS, then he must do it without all those happy jokers in the picture above and the Plane Consult people.

Listen and work with the staff. Pick the right people.Unwind the CCF for something more original than another WAU.

Don't worry about Tony F complaining. Threaten a rights issue and he'll scream and run. He has got 200 ordered Airbuses to think off.

Unless he do so, don't count on any support from the staff and public. The worrying part is that there could be many more cases of engine trouble and cut wires.

No, off course not ... it won't be the MAS staff doing. It could be to make public fear MAS and resort to take Air Asia. Who knows? There are lots of Air Asia executives brought in by Plane Consult.

Najib should hear and do something fast. He has procrastinated enough. More procrastination will cost 100,000 votes.

His war room does not have all the information. Sometimes election is won and lost on petty small stuff. At Tenang by-election, it was those medical chits. Remember?
at 4/22/2012 03:36:00 PM

MAS minority shareholders should ask for action to be taken on the Board of Directors for failure to perform their fiduciary duties on the QPR sponsorship.

and that includes ndanny (sounds like an african conman pulak, sorry joking sikit). 18M pounds is a lot of walla. or ringgit? still a lot to me.

it was a clear Related Party Transaction and was NEVER endorsed by the minority shareholders. this contravenes the companies act of malaysia (sect 132). whole thing was rushed through, and it WAS NOT an arms-length transaction.

so much for 'turnaround', 'transformation','game-changers',and apa-apa lagi words that can make a weasel flinch.

its ludicrous we are leting this guy run the airline to the ground.

Imagine all these young punks are approaching 40 and already they are expired goods.

Sometimes these cybertroopers think they are clever in their arguments.

Not only do they get predictable with their red dot skewed answers, they only turn up when a certain subject is raised.

Argument will always be . . . It is okay with singapore, it is okay for mas to follow spore and air asia model.

So you see. It is pointless to have this kind of people around. What ever you raise, they want to keep driving the same point.

Thank gawd there is a moderation function for you to reject them. Such cybertroopers is best to use the spam function.

That way you dont have to see them forever. Honestly we do not need them.