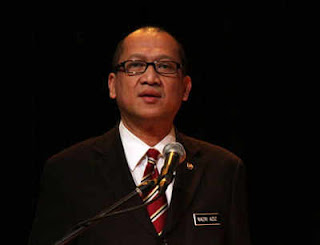 Malaysiakini had spinned Shukri's words in their report as though he is laying the blame for non prosecuted cases to the Attorney General (AG). Read in another of Din Merican's copy and pastes of articles from Malaysiakini here.

Without any prior consultation, Nazri responded with a drubbing of Shukri. 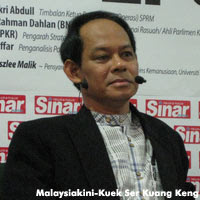 Shukri could be pissed with Nazri for wrongly scolding him in public.

He can't respond appropriately. As a public servant, he understand that it is improper to pick a quarrel in public. More so, his issue is with an elected official like a Minister.

Shukri could raise issues with Nazri but it could be misconstrued as getting even.

This will further strained the already strained relationship between elected official with public official from the recent episode of SPBA and SSM.

Nazri should have checked first before making such remark.

In his effort to defend the AG Office, Nazri has inadvertently provide fodders for opposition to put both MACC and AG Office in the spotlight. He had actually assisted the opposition to paint a negative perception on two important Government institutions.

Malaysiakini spinned it as follows:

“The problem is, many people want the cases to be charged in court, but if you ask me on this issue, you are asking the wrong person. To us, there are valid cases (to be charged in court), but to the Deputy Public Prosecutor, there is no case to answer, so what can we do?” Shukri told the participants, who responded with loud cries of lawan (fight).

Giving the audience a dry smile, Shukri replied: “How to fight? MACC has no (prosecution) power.”

They had Sin Chew Daily get a response from Nazri using Malaysiakini's spinned phrases. 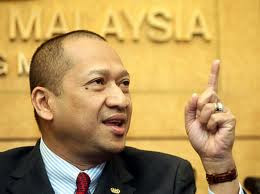 “I think Shukri (left) has a weak character. He should not make complaints openly,” Nazri is quoted by Sin Chew Daily as saying in Kuala Kangsar last Saturday.

“In fact, he does not need to make any explanation to the public because it is the job of AG’s Chambers to prosecute an individual. His job is only to investigate. I hope this will not confuse the people.”

Nazri also demanded that Shukri stops making such statements in the future.

Relationship between Nazri and Shukri and MACC could be effected by negligent on Nazri's side to not check with them to find out whether Shukri actually said those words.

With election drawing near, Government will not reprimand the press, more so if it is a Chinese press.

About Malaysiakini intentionally misrepresenting a statement by MACC about the AG Chamber. I don't really understand why people want to subscribe to Malaysiakini. The reporting is blatantly one sided and with clear cut agenda to undermine what ever is good about this country. If you are so gian to read pro-Pakatan bullshit, read Malaysian Insider. At least you don't pay to get conned. That makes you only half stupid.

MACC should investigate this Nazri for his 'inexplicable wealth' at his disposal. If you all notice he is the most vocal opposition to the idea that elected officials, ministers to declare their wealth. Got something to hide huh?

MACC supremos should grow up. Dont try to show off that you are doing all the work, infact you dont even have to prove or impress anyone.

We know MACC is working hard so why must you be so insecure that you must publicly say so? Such a lame excuse to drag AG's office in the fray whether or not what you said is manipulated.

You are suppose to be low profile. What are you doing getting on forum platforms where you know very well who the organisers are and the journos covering it hav a history of facts- malfunction.

Why must you project yourself?

Who can blame nazri if he's hopping mad at your naive stupidity la macc. Better go home and sleep la.

You still have to remember, he's not a politician. He was saying as what it is. You, my friend I consider as an emo type of commentator. So I suggest you also go home and sleep as well until you're matured enough. Thank you.