AES: Election or not, governing must go on 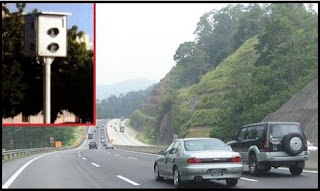 The uncertainty pertaining to the general election is making not only politicians and political observers restless, but in general, Malaysian from all walk of life too.

Public servants have to wait out the election to know who the next government and Minister will be before implementing their planned programs. New brooms have a tendency to tamper or change their plans.

The election is often used as excuse to postphone Minister's preferred program that they are reluctant to do.

These delays are not good for the public and economy. At times, programs beneficial for the public is delayed to await political developments. This got to stop.

Programs that help to reduce accident like the Automated Enforcement System (AES) should not be delayed. In the first place, process of governing should continue election or not till they end their office. The last the government should do is succumb to pressure purely on political reasons. 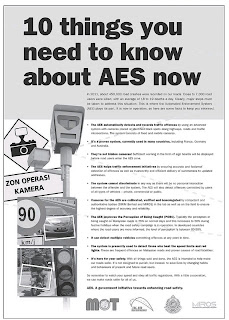 The AES involved installing a total 831 cameras to be deployed in phases in black spot areas  identified by MIROS (Malaysian Institute of Road Safety). For any offense, summons will be issued by the Road Transport Department (RTD) after all relevant information of the identified offenders compiled.

This project does not cost the government and for all likelihood, it could be one of those requiment RTD needed but no budget could be allocated. Thus, privatisation is one way of acquiring asset to assist public servant to carryout their job with ease and speed.

The cost of installing the system will be borne by two private companies,  ATES Sdn. Sdn Bhd and Beta Tegap Sdn Bhd. The companies will collect RM16 for every summon issued.

If the public stop committing offense, the companies makes no money and will not get any return from their investment. There should be no revenue or profit guarantee. That way any return is justified with the risk and investment the companies had taken and put in.

The arguments used against AES are that it is a way to take peoples' money, burden for the people, and various claimed shortcomings. Based on that, they demand AES be postphoned.

One reason not mention is politics and election. But one can assume so when it is mentioned privately that AES will make government unpopular.

In the first place, AES is not taking people's money but from the summon for offense. The summon is not issued or determined by AES but by the RTD and there are rules and law determining the amount of summon. Whether there is an AES system in place or not, offenders should be paying the same amount of summon.

If there is any excess profiteering or improper procedures in awarding the two companies, it could be an issue. Otherwise, those arguments have no basis.


As far as the excuse of burden to the people, it is a political cliche. Not all the people is being so-called burdened but only those breaking speed limit and running the red lights.

When they get into an accident for speeding or running the traffic light, these offenders become a burden and nuisance to others.

On average, 18 people die daily due to accident. Social and economic costs incurred by the government to manage the road accidents was calculated to reach as high as RM9 bilion a year.

AES is implemented to reduce road accidents and focuses on two violations; namely speeding and red light. MIROS studies found both violations are the highest contributor to accidents. AES is to address to reduce accidents related to this two violations.

He goes on to speculate that the two companies will be driven for profit that it will ignore offenses made by pillion riders and focus on going for high traffic highways. That is not a fair statement.

It infers that there is negligence by RTD and collusion between RTD, MIROS and AES providers. AES provider do not determine the location but MIROS. remember?

Furthermore, it is inappropriate to make accusation before any offense is committed. Potential such issue of operational nature can be preempted with proper procedures, monitoring and alw enforcement.

AES will capture images of all offending vehicles including motorcycles at a certain determined  spot. RTD has basis to perform a certain speed limit in certain areas.

Certain existing road infrastructure will result in a crash if the specified speed limit is not adhered to. So far, data and findings shows that cases of violations reduced in areas, where there is an AES camera installed.


The argument for education over punishment has been overused for too long. Malaysian road users are sent for more extensive classes than any other countries. Our heavy fines should have been a deterrent.

So there is no other choice than to enforce the law diligently. Traffic rules and law is there to be complied with. If one had broken the speed limit or traffic lights and proven in court, as with other offenses, one have to face the consequences.

Accident can be detrimental to the safety and life of all road users. Thus, there should not be any compromise or excuse. The same argument one often hear on matters relating to crimes and  violent unruly demonstrations should apply to traffic violations. All affect peoples' life.

It is better to regret before than latter. Another cliche almost everyone knows is prevention is better than cure.

It doesn't matter who raised the issue against AES. Ponder this also, is it responsible politics by our politicians to protect law offenders for the sake of being  popular and gain votes?

aye aye.. simple yet truthful.. am been telling those that oppos the AES more or less the same things as your words bro

& as always.. everything must be turn into political matter.

Absolutely right! Malaysian drivers are beyond help!Long time ago,you don't find people beating the light.Slowly,you start to see bikers beating them.Then cars.Now even lorries are betting the light. So we need to get back to the drawing board.Start with zero.This can be achieved by having more cops on the road.Be it in cars,bike,whatever as long as the drivers are aware that there might be a cop around the cornerThey would probably stop driving insanely.If we are lucky,two or three generations down the road,we will have decent drivers on our roads.So AES is just as good as cops on the road and I fully agree!

Put it this way Tuan Haji ... the two private companies would not have dared investing multi-millions had they not figured out the lucrative dollars they would be pocketing.

It is not solely speed that kills, but attitude. Slow drivers on the right lane provoke anger, and eventually others lose patience.

Are you saying BN-led government is corrupt?

Malaysian are nice people. Problem with Malaysians is that on the road, they become a jeckyll.

Carrot won't do it. Our fines are quiet expensive as deterent. Only choice is go after the offenders.

We complain about crime and safety but take traffic accidents lightly.

the problem is not the project but the brain of the people who opposes the project and the half past six politicians who are trying to politicize the issue for their political gain without considering the plight of law abiding citizens.don't break the law so you do't have to pay and nobody makes any money....capich ?


We have other problems in this country like laziness, racism,religious bogot and corruption to name a few , can you also champion to lessen these problems.......

Don't be a moron.

Are you saying we have to solve laziness, racism,religious bigot, corruption, and all your other problems before we solve traffic problem?

Sounds like a cina kui argument that take things out of context and out perspective. .

I my opinion, there are 3 main factors that contribute to the high fatal accident rate.

1. Motorcyclists
They are the vulnerable one. Chances of fatality or serious injury in accident is very high as motorcyclists are not protected. The chinese used to say, in car, the iron wrap around human. But in motorcycle, there is no protection except your helmet. Yet, Malaysia has high number of motorcycle which contribute to high fatality statistic.

2. Condition of the car
Malaysian use small car like kancil, viva, myvy. Even car like corolla, civic are considered small car in many countries. When these cars collide, chances of fatality will be high. In addition, we have many lorries and buses that are worth to be kept in museum, yet they are carrying overweight load on the road. They endanger other drivers.

No need to complain lah...just obey the traffic rules and all will be well.I've been driving for almost 30 years and i personally think the standard of drivers are getting bad to worse.
Yes,blame it on atitude but at the end of the day it's all about respecting other motorist as well.Beating traffic lights,stopping at yellow boxes,cutting q,driving on the wrong side of lane on highways etc..etc..
I'm sure our Govt tried hard to educate people on these matter but all we see is that more and more people are not respecting the law,hence the introduction of AES.
There are still room for improvements on the implementation but at the end of the day the question is why worry if we adhere the rule?

Let us all make the 2 crony BN companies bankrupt.
Let us all make sure nobody breaks the law and no summons can be issued.
Send this message out in all our ceramahs.
Macam tu baru betul kalau nak jadi pembangkang yang bijak.


anon 8 :05 is quite stupid cannot understand anon 8;02 who said champion other problems also laa....so why champion aes only, as a blogger who want to champion public interest so the blogger must be balance....to pro goverment pon tak bolih laa...dulu abitw is quite balance but now too skewed to one side....cari makan ke..

anon 8 :05 is indeed a moron by not understanding the proposal by anon 8 :02 who wish those who blog to be mindful of all the ills in the country and try to champion it, its was a suggestion , he is still within the context of public interest.....

Put it this way. Wake up & smell the roses. Anything that hints at politikus will make Malaysians jump. Its just how high do they wanna jump?

So question of the day " do you wanna wake up everyday & smell the roses?" I say aye to AES...cos I love my Life

Anonymous said...
This comment has been removed by a blog administrator.
11:23 AM