What is Santa Musa up to? 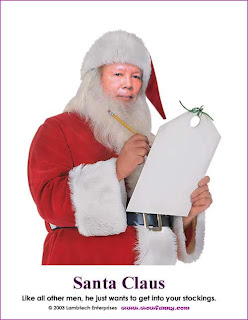 It is still October but Santa Musa has already start dishing out presents. The only problem is it is not to the more than 110,000 Sime Darby Berhad staff worldwide.

Only two seemed to deserve Santa Musa's Christmas present; namely, President and Group CEO, Dato Seri Mohamed Bakee Mohd Salleh and Nur Tania bte Dato Yusof, one daughter of a  member of the Board of Director of Sime Darby.

Our source in Sime Darby, who work there for more than 25 years, have never heard of Nur Tania.

Almost everyone in the corporate world is aghast with such generous package given to only two persons who are practically new in Sime Darby and cannot be single-handedly be attributed for Sime Darby's returning to it's expected level of profitability from the debacle of 2010.

What is the politically conniving weasel Chairman of the last few years trying to do?

Just when PAS's Dato Mahfudz Omar has just raised the issue of Tabung Haji CEO's RM85,000 a month salary in Parliamanet, Tun Musa Hitam-led Board of Directors had approved a grant for the maximum amount of 3,000,000 shares to Bakke and 200,000 shares to Nur Tania.

In means, in addition to the usual renumeration package of salary, perks and bonus package, the two deemed as "super performers" of Sime Darby will receive GES, DPS and GDS grants in accordance to their rank entitling them to effectively receive "free Sime Darby shares."

These shares to be issued upon approval of the EGM, which the majority shareholders will likely bulldoze without consideration for minority shareholders, will rank pari passu to existing shares.

It means they will be entitled to the dividend without holding the shares long enough.

Hope the grants are taxable.

The two are deemed to have fulfilled "certain" eligibility criteria as determined by a committee of independent directors and senior management called LTIP Committee and the criteria set is at their sole and absolute discretion from time to time, as the case may be.

For shareholders, primarily major shareholders like PNB, and EPF, they should be asking WTF did the Board of Directors decide on October 8th recently?

Usually, the practise of giving share options comes as a form of reward or incentive. By share option, it means the right to buy shares at a predetermined price, normally at a discount to the market to enable margin for financing, to be taken up within a stipulated time.

Basically, the eligible employee still have to come up or borrow the money.

In this performance based grant, the employee is "given money" for the specific purpose of owning shares in Sime Darby. In short, they are practically being given free shares. See this Sime Darby announcement here.

Sure it is up to the directors and senior management of Sime Darby Group appointed by the Board to be on the LTIP committee to decide. It is supposedly their discretion without the recipient's involvement.

Since this is a public company and it's major shareholders are government related i.e. public money, there must be some form of transparency and accountability.

Sime Darby must be clear what the heck is going on. No trying to hide using corporate jargons and devoid of any details and specifics. 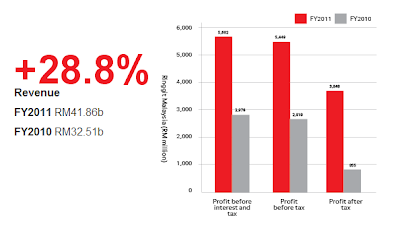 Due respect to Bakke, but he had only joined Sime Darby in 2 years. He cannot be attributed for turning around from the humongous loss of the Qatar project in 2010 and claim reward by end of 2012. 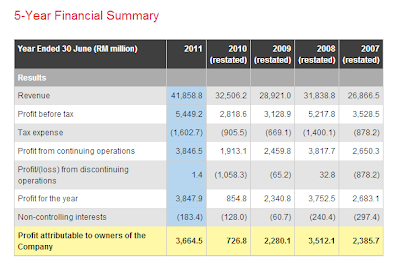 Sime Darby is an auto-piloted organisation. There is always revenues sources build up over the more than 100 years.

After chopping off the bleeding operation and taking the hit for 2010, any Malay Studies flunkie or ITM diploma holder can see profitability the next year.

It is too early to claim that the 25-30% profitability increase of 9-month profitability till March 2012 to March 2011 is attributable to Bakke. He still have to wait a full commodity or economic cycle.

It is how Bakke strategise Sime Darby from the day he joined and how the target result is achieved can he be judged. Two years is too short to say he has achieve his target. Sometimes the implementation of major strategic plan may take more than 2 years to see the performance.

Is the Board of Director dumb or something?

As far as Nur Tania, how to judge if no one knows who she is. Did she achieved a performance significantly beyond her target and is deemed as a potential to be groomed for future CEO?

Hopefully it is not because she has a daddy on the Board of Directors. Sure it is an unfair statement to make but such scrutiny comes with joining daddy's company.

One can sense Musa is up to something. Is his time up and he is trying to win the Board of Directors support to extend?

It only reminded us of how Musa pretended not to be interested in Synergy Drive Chairmanship. In public, he goes around saying Tun Ahmad Sarji as Chairman of the biggest shareholder should be. He claimed he is merely Chairman of Guthrie Corporation Berhad representing majority shareholder, PNB.

Behind everyone's knowledge, the sly fox used his political connection to get sleepy to appoint him. Not knowing any better, sleepy appointed him.


Under his watch, Sime Darby suffered an embarrassing loss from the Qatar project.

While he managed to weasel his way out and the former Managing Director, Dato Zubir Mursyid  got the brunt for a joint and several consensual decision by the Board of Directors, he is still accountable for not monitoring and making effort to avoid the inevitable.

Managing businesses is not just about setting direction and objective, and deciding, there is also follow-up to the decision as in the stage of control and monitoring. If something goes wrong, adjustment have to be made.

As Chairman, he did not do anything but tried to hide it. He failed in his role.

The way forward for this country is not to mix business and politics or business and government. The practise of having former politicians or former public servants as members of the Board of Directors of Companies as jobs for the boys should end.

Membership on the Board of PLCs, including GLCs should be meant for those with the necessary business acumen, knowledge and wisdom to help steer the companies. The refinement in the manouvering arts of the possible should be left in its area of practise.

People by the like of Musa cannot be holding such high position in business corporation. Why is it so difficult to understand that the public is sick with the like of Musa Hitam being placed in such positions, fumbled in their job and getting away with it?

LA LA LA LA LA ... squeeze all the milk out of the cash cow before his days are over.

Sleepy and Black Musa are the same kind ... whatever they touch ... it breaks.

Wat about those people like isa samad? Do u think of him like this musa hitam? Wtf is isa samad doin in felda? Does he has any business sense for a start? Or yours truly saliva drooling pm is also the same as the slumberjack?

I regreted for allowing Musa to fool me during Tun M n Musa crisis..

He proofed himself to be uncapable leader ... as Johorean, Im ashame of him ..

Isa Samad is there for his administrative experiance and ability as communicator with the common Felda folks.

He doesn't pretend to be an intellectual. Musa does.

However Isa had not lost anything for Felda. Musa has.

They think Sime is their family company.Musa is getting 100k rgt salary a month.Baki have not shown his capability to run Sime Darby.He make a mess when he was CEO Tabong Haji and Felda.

Najib has all the powers to ask him to leave!