Of late, the labelling of senility cropped up in the midst of the issues surrounding SUARAM and George Soros and the old foreign exchange loss. Old folks facing senility exhibit lost of cognitive ability like memory.

But the Pakatan media, Malaysiakini still insist on asking the allegedly senile former Prime Minister on past issues relating to foreign exchange trading losses to help Anwar deflect the responsibility from him.

Quietly in the midst is Lim Kit Siang, the veteran opposition MP from DAP that actively took up the foreign exchange loss against Anwar in the past.

Why the silence from Kit Siang, Tony Pua? Is he senile too?

At the same time, his attempt to deflect Najib’s annual Budget presentation with Pakatan Rakyat’s own shadow budget failed drastically. It needed a diversion too.

Making things worse was the squabble between Azmin and Tan Sri Khalid Ibrahim that end up with PKR ADUN, Suhaimi releasing an embarassing PKR-laden shadow cabinet.

He made allegation that Tun Dr Mahathir instructed him, when he was Finance Minister, as not to touch Tan Sri Nor Mohamad Yakcop.

And he further questioned why after resigning  from BNM, was he later appointed as Special Economic Adviser to the Prime Minister? [Read Malaysia Chronicle dated September 25th here]

Nor Mohamed was then in charge of Treasury at Bank Negara Malaysia (BNM) and was responsible for the humongous forex trading losses.

But where did Anwar got the loss number as RM30 billion? Tengku Razaleigh used to claim that the estimated loss was merely RM16 billion and he derived it from a capital deficit of BNM’s annual report. Wonder how did PAS’s "economist" Dr Rosli derived that number RM30 billion?

Perhaps these people received as from a voice from God as recently experienced by Tan Sri Kadir Sheikh Fadzir in his state of sufi drunkedness (?).

Anwar's diversion attempt did not caught on.  In fact, Anwar received heavy bombardment for his poorly conceived budget.

Tan Sri Muhyiddin Yassin added salt to injury to discredit his tenure as Finance Minister. He claimed Anwar is no economic expert and does not know the economic situation of the country.

He reminded that in 1994, Lim Kit Siang and Ahmad Shabery Chik, then was a Semangat 46 Member of Parliament and Political Secretary to Tengku Razaleigh Hamzah blamed Anwar for the RM16 billion forex trading loss. [Read the AIDC report here on MIM]

At the same time around early October, Dr Mahathir took opportunity of the Soros-link with made a remark that voting for opposition means voting for George Soros. This brought rude response from Tony Pua.

Two days ago, Malaysiakini tried hard to revive the issue and asked Dr Mahathir at a function at the Institiut Jantung Negara (IJN) as to why he promoted our own rogue trader, Nor Mohamad to Special Economic Adviser.

Dr Mahathir didn’t evade as Malaysiakini reported but merely returning their harsh words with sarcasm. He has all the time in the world to answer later. [Read the Malaysiakini report here in copy-and-paste blogger, Din Merican's blog]

In a classic Mahathir down-the-line backhand passing shot, he replied, “The opposition will bring up any issue.You see now they are going after me. Also, I am nyanyuk (senile), so why people (do) want to ask me? You look at me, I’m nyanyuk so I can’t answer your question.”

No worry Tun, he does not need to answer. Those issues can be answered by the likes of us but in another posting. This blogger understand the foreign exchange market.

But all this talk of foreign exchange will not do good to Anwar. Conveniently, Lim Kit Siang remain quiet on this issue. Is he senile or something? 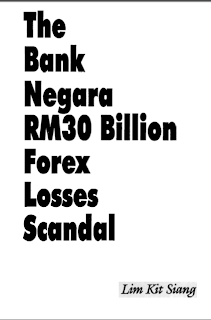 In 1994, Lim Kit Siang published a book, “The Bank Negara RM30 Billion Forex Losses Scandal”. The position he had taken then on Pakatan chief  Anwar should be interresting to be reminded again.

"Anwar said that as Finance Minister, he was "fully satisfied with the reasons" given by Tan Sri Jaffar Hussein for the Bank Negara's forex losses.”

The Governor Tan Sri Jaffar and Tan Sri Nor Yakcop had resigned to take responsibility. But Kit Siang went on to attack Anwar:


“However, the person who must also bear responsibility for the colossal Bank Negara forex losses, apart from Tan Sri Jaffar Hussein, must be the Finance Minister, Anwar Ibrahim, himself.

What else did the DAP strongman said of Anwar over the forex matter? Read on.


“There are two other reasons why Anwar Ibrahim must bear personal responsibility for Bank Negara's  forex losses.

“Furthermore, Anwar Ibrahim had misled Parliament last July when I questioned him whether Bank Negara had suffered more forex losses.  Anwar said that this was not true as he had been monitoring the Bank Negara's forex dealings weekly.

On July 19,1993, I asked Anwar Ibrahim a supplementary question during question time as to whether at that  date, Bank Negara's provision of RM2.7 billion contingent liability for forward forex trading in the 1992 Bank Negara accounts had not only been confirmed, but even more forex losses had been incurred."

In this one short answer, Anwar Ibrahim had misled Parliament and the nation on three matters:
Today what Anwar, Tony Pua and Pakatan Rakyat’s media want people to believe that the bad guy is actually the hero and put the blame on others.

However when he was Finance Minister, BNM comes under his auspices.

Even if he is ignorant in the area of finance and economics to initiate any new polices or initiatives, he should at least play the role of monitoring the various departments, institutions and agencies under him.

If Kit Siang now says he was wrong in his book, that is fine. But then he must admit that every allegation he and his comrades make can be wrong. It will imply that allegations he made are to serve political purpose. It matters not to the accuser that they may be wrong, very wrong.

Will Kit Siang admit he is wrong or he wish to lay quiet like a senile old man? Never mind, he doesn’t have to answer that. Neither do Tony Pua has to answer.

According to Raja Petra, it looks as if, DAP is subtly doing a number on Anwar.

And deep within PAS, DAP and even PKR, almost everybody believed Anwar is guilty of sexual misconduct and many other indiscretions. They could be lining up against him. [Read RPK in Malaysia Today here.]

Given the choice between old senile Dr Mahathir against conscious and alert Anwar Ibrahim or Lim Kit Siang or both of them combined, Dr Mahathir is more useful and have more to contribute to this country. He is more relevant than Tony Pua perceive.

Lim Kit Siang can't truthfully deny that Muhyiddin is right about Anwar. He can talk but knows nuts about economics and finance.
at 10/11/2012 02:35:00 PM

or kit siang himself, should he wants to remain senile - we will conferred a special commeration on his senile-ship - must propose similar investigation towards his OWN allegation.

tony pua is a failure. even on the smallest stage.

This nation will never be able to progress for as long as Mahathir is still alive.

if i have my way..I have all you shot-pinkfloyd