Before this, nobody knew.

It takes the latest development from Air Asia to confirm that Tony F's problem is not penetration. Tony F pulled out of a signed understanding because he had dysfunctional problem.

All the while, he was covering up for his dysfunctional 'brother' by having regular photo op with his sexy stewardesses in red short skirts.

After the MAS-Air Asia collaboration failed, Tony F was trying to play macho. He still insist to tell the world that his dong can still grow. He played down Malaysia and announced going off to a greener Indonesia that promises higher growth than Malaysia. 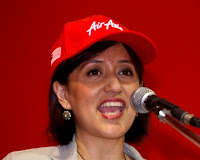 And he left Air Asia Malaysia to a woman.

He was sending a message that Malaysian operations is hardly worth anything and doesn't thrill him. A woman could manage it.

[Note: Please ladies, we are not Male Chauvanist Pig (MCP) who degrades woman. If there is any MCP, it is Tony F.

Notice how he and Kamaruddin treats Air Asia stewardess as sex objects for photo ops and video promos, and as social escorts to accompany them for even private dinner appearances.]

All along he was hiding his own headache in how to sustain the high level of 'foreplay' he has grown accustomed to from the preferential treatment given by the previous administration at the expense of the national carrier.

As soon as he made his move for Indonesia and announced the takeover Batavia Air to show he has a move to gain immediate market share, Lion Air signed a joint venture with NADI to form a new airline based from Kuala Lumpur, Malindo Air.

Everyone knows he's got penetration problem in Indonesia and the Malindo venture will penetrate his Malaysian market.

It should be a cause for more sexless night for Tony F. But, he was just to proud to admit. He  tried to make himself feel good by talking dirty.

It didn't stop there. He got out of hand as he talked dirty to the man who made him into that verile man he used to be.

In late July, Tony F announced Air Asia Indonesia was buying 49% of Batavia Air. Subsequently by next month, he faced some problems as the nationalistic Indonesian authority insist he disclose his ownership structure.

He didn't had that problem for IPO in KL when the authority knew his Air Asia was foreign majority. Not with the Indonesian.

The incident indicate that the Indonesian want him but they don't trust him. It was only in late August did he get authority clearance. That clearance gave him the confidence to psyche Malindo.  [Read it in here]

Then the bomb last Thursday.


The deal would give Fersindo a 51 percent share in Batavia, with the remaining 49 percent going to AirAsia. It was scheduled to be completed by the second quarter of 2013.

A source at Investor Daily said AirAsia and its partner wanted to lower the selling price that had been agreed upon. Existing investor Metro Batavia refused.

AirAsia and Fersindo are partners in Indonesia AirAsia, the local unit of the Malaysia-based budget carrier.

Did Tony F really pulled out or his negotiation game failed to work?

Tony F was trying to squeeze the seller at the last minute and like any typical pow life, he was decaying on an agreed understanding.


The bad boy of the airline industry is still at it with his unethical and ungentlemen business conduct. He thinks he can do one on the Indonesian.

Fox Business News reported on the next day, Oct 11th of:

A person familiar with the plan told Dow Jones Newswires the deal fell through because financial data supplied by Batavia Air during a due diligence process "didn't make sense for AirAsia." The person didn't elaborate.

Batavia Air had an 11.25% share of the Indonesian market and a 3.6% share of international routes out of the country in 2011, serving more than 50 routes across Indonesia and Asia.

Tony F didn't have a story to tell and Fox News only can say in quote unquote "didn't make sense" because there was no elaboration.

By today October 15, lots of news report are using words like "ailing carrier", "to risky", and "timing inappropriate". Some news report were giving confirmation to Tony F's move by claiming the market was relieved that Air Asia did not continued with the takeover.

Who is he to fool? What market/

It is only his friendly analysts making public comments. These are the same bunch of people getting  early and illegal leaked market sensitive information from him before he makes market announcement.

Punters maybe thinking these analysts are smart and able to anticipate Air Asia moves but in actual fact, it is leaked information.

Another way to see the journalistic fervour in the reports is that Tony F chicken out. Maybe he is scared of the turn in the economy in Europe and wanted to pull out. Then it means he has no guts and his peckers are dysfunctional. Only hot air macho talk.

However, we are sticking to the story that Tony F the 'low caste carrier' operator (no offense intended on my Hindu friends) wanted a bargain but couldn't get it. All the later explanations were merely excuses.

Look guys, we've been saying it all along.

He is no real airline wunderboy but merely a marketing man who was put up there with help of hidden and unknown subsidies, preferential treatment and cannibalising of MAS.

He got Khairy, Dato Zaki Zahid, and Tan Sri Nor Mohamed to hoodwink sleepy. So Tony F was  never really verile.

Typical of low life businessmen, he wanted to do a last minute squeeze to lower the price for a bargain. The other bloke did not fall for it. Sure they said they will continue to work together to save face.

That is something else all together. Any "Air Lancau" can cooperate together with Batavia Air on ground handling.

If Tony F had sang praises for Batavia Air before this, this time the nasty SOB got his media buddies to discredit the other bloke to cover-up his failed gameplan.

Just you wait, Henry Higgins. Just you wait. The Indonesia will not sit down when you make them lose face.

Some may say it is a prudent move for Air Asia. Oh pleazzz ... understand Air Asia corporate model.

Just admit it, Tony F. You failed and you're going down!

Now Tony F can't get the immediate growth you wanted. Don't give us this dog shit of trying for organic growth in a domestic Indonesian market dominated by Lion Air, Garuda and Citilink. He is  no good and never proven at organic growth. He only know of securing market share fast and hyped the market with his record company styled marketing buzz.

Just because Tony F failed to get what he wanted, he shouldn't be nasty and call the other bloke short.

But that's alright. A short thumb could mean a long second finger extended at right angle. Not only a sizeable Richard is an advantage, what matters is that it works and weren't easily cowed by sexless Tony F.

From now on, Tony F need to revive his dysfunctional pecker. Until he can convince his shareholders that he can sustain the high growth he has been benefiting from MAS, who would want to hold his shares.

Who will want to partner him in Indonesia from now on?

Without a high growth, Air Asia will fail. Trust us, we've seen hundreds of high growth modelled companies repeatedly fail and go under since the 80s.

It'll start with earning plateau off and no more high growth. That is happening.

It usually begins with a southbound share price that stays down for quite sometime. Prices are already coming down. If the European and OECD contry's economy gets into the doldrum, prices will stay low for a while.

Then the operational problem start to creep in. Cashflow tightened but initially, they could figure out some form of financing. However the apple suddenly begin to worms creeping out of it. More problem ensue and banker comes in before the jumble sale endgame.

Without a functioning Little Tony, be scared, Tony F. Be scared.

Anonymous said...
This comment has been removed by a blog administrator.
10:46 PM

And some more, talk about AA Korea lah, AA India lah and AA elsewhere.. his cock-a -doodling the same tune everywhere he goes and thought he can get scot free by prematurely announcing and blaring his so called success. The only success to AA came during TunDol's time and that without paying what is due to MAB... In Malaysia you tweak and hid behind some cheap politicians but when you venture elsewhere....you sink sink sink.... Pride goes before a fall and nexy year we will hear more news of troublesome AA TF and their gang..

That is a shallow and old school argument.

Problem starts when the wrong people start to do the wrong thing.

For example: a record company man pretending to be a successful airline man.

Anonymous said...
This comment has been removed by a blog administrator.
12:26 PM

where is the growth area for air asia to use these planes?

If Ananda Krishnan set up an appointment with Najib and his successor giveaway MAS routes, I would stop talking and run an airline as challenged by Anon 10:46 PM and Anon 12:26 PM.

Anonymous said...
This comment has been removed by a blog administrator.
5:31 PM

Not sure if they are paid by or from Aireen Omar's office but they usually comment silly.

Big Dog I can picture you under the grape vine trying to convince yourself that the grapes above you are indeed sour. Say what you like if you visit the LCCT then you will realise what he has created. He has left a good business model it is up to Malaysians to kill it like they have done to MAS or allow it to grow and become a giant in Asia. Here everything that we touch turns into gold because Sovereign funds and Sovereign related funds are prime pumping Taxpayers fund into the various GLC. Just imagine KTM needs another RM3.5 Billion for double tracking in addition to the RM12.5 Billion. Total RM16 billion. Divide that by 900 Kilometers and you will get the cost of one Kilometer of tracks.And at that price you can build a high speed train from north to south. Now you tell me if that is a wise decision before you cast aspertion on what Air Asia has created in terms of spin offs.

Ermmmm are you sure you are in the right place... and what are you rumbling and mumbling about?.. Big Dog? hehhe wrong place lah macha... like this confirm AA will tumble..don't know who you are addressing, don't know what you are talking about and for sure, you don't even know where you are going...similar to AATF...very confused now...with cancelled MAS colloboration, aborted Air Batavia aquisition, too many planes ordered without down payment (can do such thiing ahhh?)with no where to go and some more waiting for foreign govt to give everything at a discount to AA..sheeeesh

"He was sending a message that Malaysian operations is hardly worth anything and doesn't thrill him. A woman could manage it."

Wow, you are really a sexist dicriminate against the women thinking that women is inferior than men for their capability of running a company!