Pertinent question for MAS on it's 40 anniversary 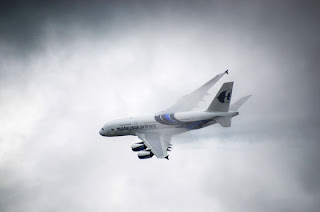 Today is MAS 40th Anniversary.To reflect back on it's past 40 years, do read history and aviation buff Bigdog's latest posting here.

There is a saying that life begins 40.

At that age, one is supposed to have reached some level of maturity, knowledg-ability and experienced. But most important, the age 40 is the usual age most men acquire a sense of responsibility.

Known to Muslim, Prophet Muhammad received the holy message at 40. Before the revelation came, he spent time doing deep reflection and contemplation on life, the world, his existence, God, etc..

MAS is not human. It is a company. But since it is being steered by human, it is perhaps as good as any time on it's 40th anniversary to ask the pertinent question of what does it want to be.


The only different is that MAS the organisation or it's top management and Board of Directors can do that contemplation but it is the national leadership that has to decide.

The way the aviation world is shaping up, the thinking that MAS can remain to be a public-listed company to pursue profit and also undertake needs rethinking. Although it is partly the mistake of the previous administration, nevertheless Air Asia proves that such thinking need to be reviewed.

The role to link the two sides of the country, reaching to the interiors, international diplomacy, promoting tourism, flag carrier and name of Malaysia, and various other social roles has cost to it.

MAS does not have neither the luxury nor in the position to absorb the cost of carrying out those role and continue to meet stakeholders' expectation of maximising shareholders wealth i.e. make profit.

It is not impossible for MAS to turn around. National flag carier like JAL managed to do so.

However, the do so, it has to be clear and focus in it's vision and mission. MAS cannot have two visions, with separate set of missions, strategy and implementation plan.

Despite the trying times, it has already started on it's attempt to comeback with acquisition of new planes. To keep itself a player, it has to continue to reinvest. It means more money.

If the national leadership views that they want MAS to be profitable, then the stakeholders have to invest and focused towards profitability. Be damn with unions, be damn with social role and be damn with everything that does not serve to improve and bring back MAS in the black.

It is a path of money for money sake.

But then, if it is about it's social role for rakyat and nation, be reminded that it means Government will be pumping money without expectation of direct return but on other set of expectations or KPIs. Perhaps MAS only fly to areas until commercial airliner take up that role.


Air India is an example of former commercial airliner that have been reduced to play only the social role. It's fleet size is much reduced and Government bear the cost.

What, how and when of such strategy to keep MAS as only for social purpose role can be sorted out later. The first step is the decision by the Prime Minister and the Government to make their pick.

Profit or people and nation?

I past thru MAS Subang office daily, and for someone who proudly contribute 15 yrs of my life to MAS frm early 80s to mid 90s iit sickens me having to look at the state of MAS LOGO on it building.
They spend millions of rebranding but can't even change the rusty looking LOGO....come JOHARI....