Sometimes journalist can be wrong and when sued, they seek settlement. That was what happenned to veteran journalist Datuk Chamil Wariya.

At first, we do not see any big deal with Bigdog's call for his resignation from the Malaysian Press Institute (NPI). [Read here.]

After being told of what happened behind the scene during the time his controversial article, "Politik baru YB J" for Utusan Malaysia in 2008 and the pre- and post-event to his settlement with Theresa Kok, Bigdog's call is justified. [Read also Rockybru's here.] .

This act shows that this man has no honour and undeserving to head that institute. The way The Malay Mail reported the Chamil settlement shows that ethics in journalism has languished under his leadership.

When Chamil submitted to Utusan, our source claimed he did not use YB J for his so-called fictional cerpen but specifically mentioned the name YB Theresa Kok.

The editorial team changed it to YB J and edited the cerpen to avoid the close resemblance to that of Theresa. It was to protect him and the newspaper company. They can't reject an article from someone of Chamil's stature.

Theresa sensed it was her because she was very much in the story then for seeking a neighbourhood surau to silence their azan. She sued Chamil and Utusan Malaysia.

Four years down the road, our source informed that last week, he agreed to an apology with Theresa without the knowledge of lawyers hired for Utusan Malaysia for himself.

Many believed Theresa has no case because the cerpen may seemed similar but was not exactly the same. If it can't be proven in court to mean her, there is then no case for Theresa's lawsuit.

Chamil's cerpen had the support of Malays who was then angered by DAP's swiftness to exert their presence.

While, Theresa angered Malays with her complaining the volume of a surau's morning azan and questioning the jawi letters on road sign in her Seputih constituency.

For him to cave in and negotiate behind Utusan's back, it is an act of coward and betrayal. Utusan was put in this predicament by his writing and they had provided him lawyers to defend him.

To add to that, Utusan has to pay some RM50,000 for Theresa's legal fee. And Chamil conveniently refuse to take up that responsibility.

The issue in question is not about Theresa's right to sue and the right or wrong of the content in the case but Chamil's professional conduct and sense of responsibility. It seemed he is only concerned for himself. If so, he should have paid for the RM50,000 legal fee!

Chamil's sense of ethics, responsibility and camaraderie as President of MPI is now in question and it has already translated down to journalists.

By coincidence, it is the report of himself that shows a decay in professionalism among the media, especially the left leaning ones.

The now left leaning Malay Mail gave a frontpage coverage today. It was written by Hamzah Najam. See below: 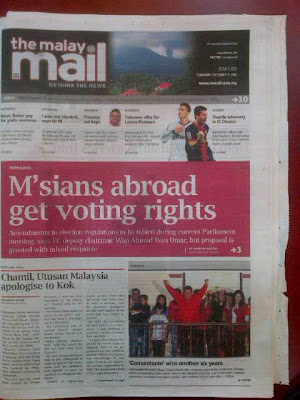 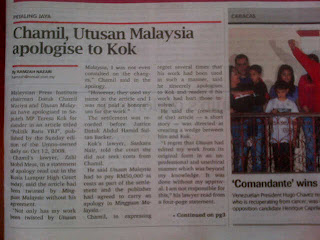 It is the exact report by Malaysiakini yesterday. Go to The Malay Mail website and read the Malaysiakini version below:

Chamil's lawyer Zalil Mohd Mess in a statement of apology read out in the Kuala Lumpur High Court today, said the article had been twisted by Mingguan Malaysia without his agreement. 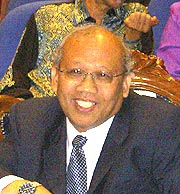 "Not only has my work been twisted by Utusan Malaysia, I was not even consulted on the changes," Chamil (right) said in the apology.

"However, they used my name in the article and I was not paid a honorarium for the work."

The settlement was recorded before Justice Abdul Hamid Sultan Backer.

Teresa Kok's lawyer Sankara Nair told the court that she did not seek costs from Chamil.

He said Utusan Malaysia had to pay RM50,000 as costs as part of the settlement and the publisher has agreed to carry an apology in Mingguan Malaysia.

Chamil, in expressing regret several times that his work had been used in such manner, said he sincerely apologises to Kok and readers if his work has hurt those involved.

He said the (rewriting of the) article - a short story - was directed at creating a wedge between him and Kok.

“I regret that Utusan had edited my work from its original form in an unprofessional and unethical manner which was beyond my knowledge. It was done without my approval. I am not responsible for this,” his lawyer read from a four-page statement.

“In my work sent to the Mingguan Malaysia editor I clearly stated the difference in the YBJ character and that of the Seputeh MP. In my original work, it is stated that YBJ is (somewhat like) YB Teresa Kok (left) but YBJ is not Teresa Kok."

Describing the changes made as "not small", Chamil claimed it was fundamental to changing the story.

He believed that the changes to Kok’s name and position were purposely done by Mingguan Malaysia for the purpose of creating further controversy and scandal.

“As a result of this, Kok and I have become victims in the scandal,” said Chamil.

He acknowledged that editors and publishers have the right to change the original script, but said the changes have to be referred to the writer for approval.

“In this case, the changes did not get my approval. They did not contact nor inform me at all. That is why I do not consider the publication of this article as my original work, although my name is stated on it.” \

Chamil said he had explained this to Kok’s lawyer on receipt of the letter.

“I would like to stress that Mingguan plagiarised my original work and changed the characters resulting in it appearing different from the original work. 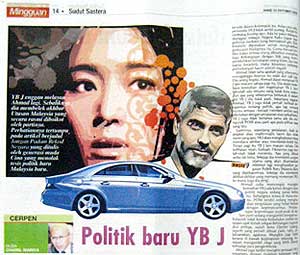 "What makes me upset is that my name and photo were used. The fact that I did not get a honorarium is more proof that Mingguan did not think that this is my work.”
Chamil further said his reputation as a writer has been deeply tarnished.

Utusan’s lawyer TKB Mohana Kumar objected to Chamil’s strong words and assertions and asked the court to record this.

It also said Chamil had referred to Kok in his original work, which had been changed.

“We did not intend to refer to Kok in any way and sincerely we regret and apologise to her over the misunderstanding caused as a result of the publication of this article,” he said.

Utusan has agreed to publish the apology in its weekend edition Sudut Sastera.

Where is the sense of ethics to claim Malaysiakini's article as their's?

And for Chamil, if that is not a betrayal and stabbing of a comrade, what is?

Perhaps Utusan Malaysia should publish the original unedited version of Chamil's work and let us all judge ourself Chamil's claim.

What do you expect from someone who wrote about Pak Lah and showered him with accolades? Do you think he is a truthful man?

We should actually ask why he is considered a 'reputable' journalist in the first place!

We should be more careful in 'upgrading the status' of any personality in the future.

The fella who complained about the azan sound volume was a MCA Wilayah AJK la. It came out in newspapers some more.

He later acknowledged and apologized for the whole episode.

Please don't say it was Teresa Kok in the azan controversy. You may be next to be sued for libel!!

We don't want you to lose and later apologize and beg for forgiveness like Chamil later...


This is a typical bootlicker and ampu-bodek expert...
However, wat i wanna tell is how hsi life changed after he left utusan for tv3...there he met that tv3 bitch who became his 2nd wife...
Left tv3 and lobbied for mpi's top job and got it with a windfall...changed the post from director to ceo...his first wife also a somebody there while his eldest son is one the researchers there...an spm dropout but got a 5k monthly pay doing nothing other tha being daddy's son...
And now CW showed the world tha he is an ungrateful bastard...he really is!!

Dont try to confuse the public what Theresa did not dispute.

The MCA A JK issue involved a surau in Lembah Pantai and was resolved.

Theresa turned up at a surau in Puchong in early subuh to complain. They resolved the issue.

Some surau and masjid do go overboard with the volume of the speakers and unnecessarily broadcasting tazkirah, ceramah and kuliah conducted inside.

The issue is nor about Theresa but about Chamil. Please understand the issye and dont try to lie what is already a fact.

YBJ was the central character in the short story.There was a paragraph in that story where YBJ's driver Ahmad contemplated whether the same fate as that of YB Su Lan's(this was a fictional name that Utusan inserted instead of the name of Teresa Kok in the original script) who were subjected to a petrol bomb attack would befall YBJ .That portion was highlighted in Utusan's statement in open court as part of the settlement.So is Teresa YBJ in the story as alleged by Teresa?