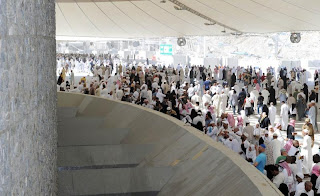 In Mina, the just-arrived pilgrims did the stone throwing ritual at only the main Jamrah of Kubra and ended their ihram clothing and prohibitions. In the old days, the Jamrah are merely pillars but today, it is turned into wall structure complex to cater for the large crowd and better aim.

The pilgrims started the stone throwing ritual on the three Jamrah on these three days of Tasyriq. All these procedures we underwent last year is coming back in our mind on these long Aidil Adha weekend. It brings a sentimental feeling of longing for Mekah.

In our youth, the old folks would say Aidil Adha is Hari Raya for the Hajis or those that have peformed the Haj. Exactly one year later after our Haj last year and on Aidil Adha, that saying is real. Aidil Adha feel different this year.

It is a sentimental reminder of our somewhat challenging journey to emulate the pace and steps of the Prophets. And it reminded us of what it means and the resolve we made with God in the holy land of Hijaz.

So what does it got to do with chicken shacks? 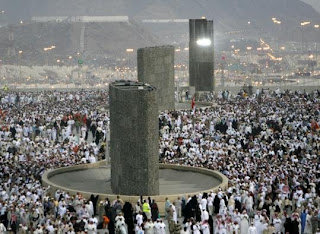 Well, if you had read a posting we put up last year during Haj, one would have recalled us describing our living condition in Mina as similar to living in a KFC chicken fattening farm. [Read it back in Angry in Ihram.]

Not that we really care but frankly, that was what the living condition then.

Upon flying in to Saudi Arabia, our hotel room, which was usually meant for two, had five occupants. Our hotel room in Mekah that would, usually have space for two double bed, had seven occupants.

Our relatively smaller tent in Arafah for the night before yesterday’s wukuf had 40 people inside. While everyone is asleep, the tent looked like a bolster factory warehouse.

But that is still Hotel Sentral by any standard. 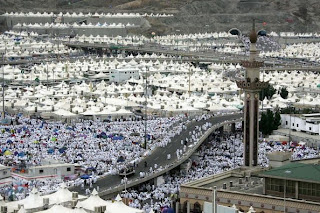 In Mina, the place you see on TV as having flood of white tents, the sleeping space quota was 15 people arranged in two rows within a space of less than 100 square feet.

Our’s could be less because my policeman roommate beat me to one space left and we had to sleep in the middle at the end of everyone’s feet.

We heard this year’s pilgrims are luckier. They have more space with quota reduced to 10 from 15.

Thanks and no thanks to Jho Lo’s connection with Saudi princes, more pilgrims than the 28,000 quota was given to us last few years and this Haji Akbar season the additional allocation is held back. For Muslims bitching of Jho Lo, you owe him an apology.

Nevertheless, it is still a far cry from the comfort of home.

Everywhere one moves, one is faced with a sea of humanity. However, in that packed roads, tents and pathways, and among millions of other pilgrims in that small area, we were alone. 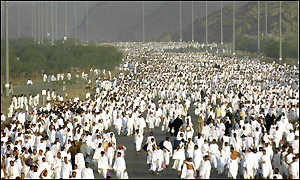 Our main concern is focused on the affair of our little entourage of my wive, my in-law and myself. Not even of my uncle and his wife, or my alumni mates, or my fellow bloggers and writers also performing Haj that year.

Yes, we do help and lent our hands to other pilgrims, old and handicapped, in carrying out their  chores and task, which is made difficult by unfamiliarity, confusing condition and rush of other pilgrims.

One had to tolerate and endure the reality made worse because to Muslims from other countries,  queuing is a foreign concept. Ah! At one time or rather, Malaysian used to be the same too. One only need remember to scramble to get 3rd class cinema tickets.

Through the rush, pack crowd, and scramble of people, it is just us and God in mind.

In the six long hours of hallucinating and cramped ride to and from Mina, one is only resigned to chanting praises of and submitting to God. 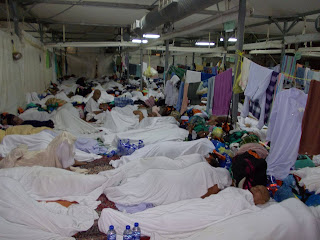 Perhaps, that is how it will be on the day of reckoning. Maybe that is how it is at the field of Mahsyar on Judgement Day. Prophets hadith had described wukuf as a rehearsal of Mahsyar. It is just you and God.

Some pilgrims say their whole life flashed back in the field of Arafah during wukuf.

However, we   experienced neither the “video replay” nor “voice coming from heaven” on that day. Probably, God knows to well that we are too much a rationalist to buy into anything out of the ordinary.

We were quiet at Arafah, and keeping pretty much to ourself.

The night in Arafah we slept a little. After Isya, we recited the Quran, did other non-compulsory prayers, and did some zikr and doa. When feeling tired and sleepy, we laid our body against the tent's stilt, but still unable to sleep. 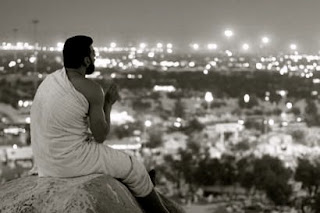 We spent wandering in our mind till fajr. Some events of the past came back. Some defining moments of our life reminded. We smiled and cried by ourselves, oblivious to others in the makeshift surau.

In fact, it was not only during wukuf.

Whenever we walk by ourself, sitting alone or keeping quiet by ourself throughout Haj, we continued with our “daydreaming.”

As we gaze at and hearing the murmurings of doa, tahmid, and takbir emanating from the sea of humanity at Arafah, Mina, and circumbulation around the Kaaba, subhanallah we wondered in amazement to hear those many subtle voices combining into loud praises of God. 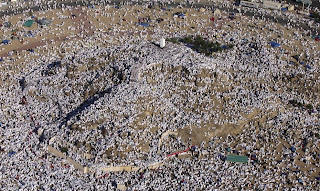 Our mind wanders and it is as though one is talking to oneself. We became aware of our insignificance in the whole universe of things. Had we died then, we would have been just another body brought into Masjidil Haram in Mekah or Masjid Nabawi in Medina for prayers preceding burials.

Hardly anyone know who we are, where we came from, why and how did we died, and what we had contributed in our life. Even if we are someone famous in Malaysia and some of the pilgrim from Malaysia may know who we are but pilgrims from other countries would not bother.

We are alone and also insignificant.

Strangely, we remain as relevant to God as any well known person. One felt the existence of God and the attention bestowed on each and everyone of us. Amazing, isn't it?

One or two doa to seek help to ease simple task made difficult by the circumstances could get fulfilled immediately. And, many lay claim getting “a friendly reminder” for going a little beyond modesty. 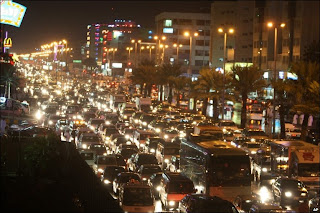 It strikes us then at a crossroad of our life that we are alone and insignificant but relevant beings to the one and only God. It means God’s message through Muhammad is as relevant and inclusive for the masses as much it is exclusively for ourselves.

In the sea of humanity, feeling alone and insignificant but getting God’s attention, what does it lead to?

Without being disgustingly preachy and somewhat repetitive, it brought us a sense of relieve and some sense of responsibility and obligation.

Without repeating what our responsibilities and obligations to God the all merciful and compassionate are, one knows it as spiritual in nature. The arduous task is to elevate ourselves to higher level of spirituality. 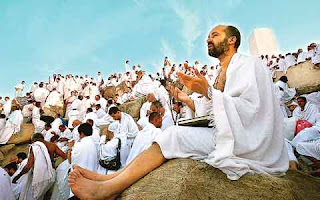 It is the way towards relevance presence.

Fardhu kifayah is responsibility that arise from a calling to take initiatives and do beyond one’s limited responsibility and for the benefit of many. It is about being selfless and giving a bigger sense of purpose and a cause to struggle for in our day-to-day life, whether ever the route and journey we chose.

It is the spiritual calling in which one build the foundation to humanity, progress, and civilisation.
The start lies in becoming more spiritual in the eyes of God by doing good and contribute to fellow Muslim, other humans and God's creature on earth. 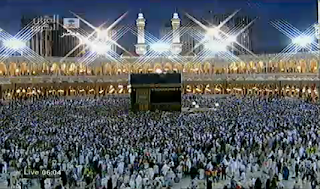 How do we achieve all this?

It is at this point we can only say for ourselves but not tell others what they should be doing. Many of one's private experiences in the holy land are something private.

After much reflection, we see the path is to emulate the Prophet to seek the truth (siddeq), be honest (amanah), propagate and examplary (tabligh) and finally, wise (fatanah).

Those are simple communicable ideas but it is difficult to apply to the letter and spirit.

But that was our resolved with God, without fear or favour, to be truthful, honest, examplary and wise in all aspect of our actions for ourselves and other insan (beings) on earth.

In packed "chicken shacks" and sea of humanity, but feeling alone and insignificant, we sense our relevance and made the resolve to strive to be truthful, honest, examplary and wise in all our endeavour.

Mekah ... a place so barren of desert, rocks and heat.

Yet so spiritually meaningful.

I share your experiance ... sentiasa merindui Mekah. It's memory brings tears to us too.

The next few days Mekah will be packed to the brim till pilgrims begin to leave home or to Medina.

Another one we can add is amar makruf nahi mungkar.

In a more simple word, to do good and reject evil.

Bro.
Came to Hajj.We are guest of Allah.Money pr wealth alone cannot guarantee you can come to Mekkah.So you have to accept what ever condition you face while you are in Mekkah.Allah make it easy for some and difficult for other.

Mina is a vary narrow valleyCan accomadated aroung two millions people,You have every year almost 3.5 million pilgramages every yera,so you have to shares what ever space you have.
What is amazing,eventhough you face all the problem,you still want to come back to Mecca.

Any way,bro i am now in Mecca.I saw in Arafah an Indonesian Tent, just like a wedding tent ,decorated with thousands of flowers and roses.

I wish i can send the pic.to your blog.