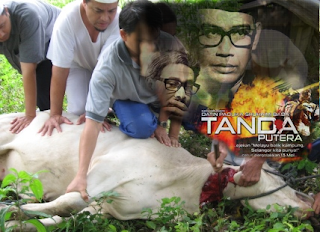 Tomorrow will be Adil Adha and most companies are letting their Muslim staff early today to allow the womenfolk to prepare for the celebration tomorrow.

Some folks from the East Coast states of Kelantan and Terengganu have started their arduous 'balik kampung' journey last night. More will leave today. The Aidil Adha celebration is more lively than Adil Fitri there.

Pilgrims in Mekah will begin their jam-packed journey from Arafah to Mina this evening. Tomorrow the first stone throwing ritual commence and they will be out of their ihram clothing. In Malaysia, we celebrate Adil Adha and perform the customary 'qurban'.

The 'qurban' ritual could only begin after tomorrow's morning prayers at the Masjid. It is the symbolic sacrifice of four legged grazing animals like cow, buffalo or goat. Most of the meat is distributed to the poor and needy.

Although there was a sense of optimism from reading Tuesday's Malaysia Today, but that is the past now. Tanda Putera was already made the first sacrificial animal for this Haj season. 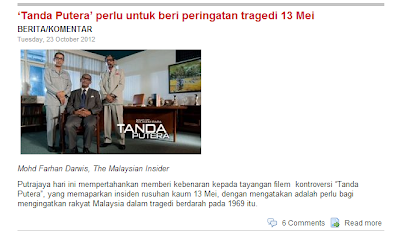 Let's read first the report from the perspective of a news portal whose agenda is against the content andmessage of Tanda Putera, The Malaysian Insiders below:

KUALA LUMPUR, Oct 23 — Putrajaya came out today to defend its approval of “Tanda Putera”, the film on the May 13 race riots that has courted much controversy, saying it felt it was necessary to remind Malaysians of the bloody tragedy in 1969.

Deputy Minister Senator Datuk Maglin Dennis D’Cruz told the Dewan Rakyat that the government believed that with the level of maturity of today’s youths, such historical events should be depicted in a most “effective and realistic” manner.

“Although it touches on a sensitive racial issue, the May 13 tragedy has become an important incident that Malaysians must take heed of and use as an example of how important racial harmony is to the country,” he said during Question Time. 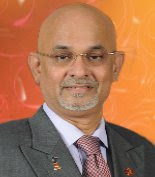 D'Cruz (picture) added that despite the bad publicity that the controversial film has received so far, speculation that it contains negative racial sentiments was still “premature” as “Tanda Putera” has yet to be released in local theatres.

“Tanda Putera” is scheduled for general screening on November 17, but a 90-second trailer of the film available on the Internet has already sparked some controversy because it appears to suggest the Chinese community was to blame for the riots.

To a question from Datuk Mohd Sirat Abu (BN-Bukit Katil), D’Cruz offered the government’s assurance that the government, through Finas, reserves the right to reject any film production that violates the guidelines of local censors.

He said all applications for the production of such films on patriotism and heritage must earn the nod of a selection committee which comprises representatives from Finas and other relevant agencies.

“Finas will monitor each project throughout the entire production and it has the right to reject it if it goes against any decision made by the committee.

“Any changes to the film must first be referred to Finas for a formal approval,” the deputy minister added.

Renowned director Datin Paduka Shuhaimi Baba recently had to come out to deny that “Tanda Putera” was promoting a pro-Malay agenda or that it featured a character based on DAP lawmaker Lim Kit Siang who was portrayed in a negative light in scenes depicting the May 13, 1969 race riots, as suggested by some Umno blogs to the chagrin of Pakatan Rakyat (PR) leaders.

Earlier this year, an administrator of film-makers Pesona Pictures’ Facebook fan page had posted a photograph of Lim being “manhandled”, with a caption asserting it was taken after the opposition leader allegedly urinated on the flagpole in the then-Selangor mentri besar’s residential compound in Kuala Lumpur before the May 13, 1969 riots.

The picture was removed last month after personal attacks and threats were allegedly made against the cast and crew of “Tanda Putera”.

Despite showing date was coming close, the film's new trailer and promotion poster was noticeably missing in the theaters, even within one month to showing .

Maglan's statement turned out to be a deviation by the Minister since he had planned long time ago to only show the film after the general election. Only his opinion and prejudice matters.

Cowed by DAP's psywar and influenced by the gutless Gerakan's President, the photocrazy Tan Sri Dr Koh Tsu Koon, the Minister postphoned Tanda Putera out of fear the film will offend Chinese voters and affect Barisan Nasional chances in the upcoming general election.


Being the weasel Rais is, he has manouvred it to the point of influencing others.

One cannot not point the blame at him as he had orchestrated and camouflaged himself through the actions of FINAS's Director  General, Naguib Razak. By delaying Naguib's due reappointment, Rais was able to 'cabut taringnya' and make Naguib do his dirty work.

Everyone in the industry knows the hands of Rais and his messengers that also include Finas Chairman, Dato Apendi Hamdan. The least he could have done was to request Naguib take responsibility to announce themselves the delay they had orchestrated and Rais do some sympathy play acting.

But no, they have to pass it to woman to make the announcement below:

Following news reports on this film which was brought up during question time in Parliament yesterday and the ensuing ‘confusion’, we would like to clarify that we have been informed the nationwide screening of Tanda Putera scheduled from 15 November 2012, has been cancelled.

The new screening date will be announced as soon as we receive confirmation. We were advised by Media Advisors that it would be too late for any promotion and distribution works for a November 15 screening after the cut-off point of 23 October 2012.

In view of the number of slots already taken up under Wajib Tayang after 15 November, it is likely that Tanda Putera will be scheduled for general release early next year.

We deeply appreciate and thank all who have given their support and those who have expressed their interests in this film, and hope that they will continue to do so when this film is screened nationwide.

Should the postponement of the screening cause undue hardship or be a source of disappointment to anyone, we humbly apologize. 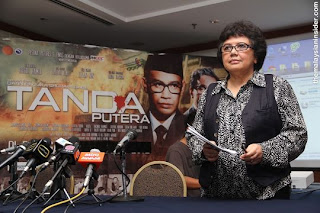 Why should she apologise when it is the action of others than have caused much delays and postponement?

She had done nothing wrong and had cooperated and work closely with the authorities. Despite Tanda Putera being her intellectual property, she was willing to be scrutinised prior to the final print.

Tanda Putera went for editing with FINAS and in which early copies were sent to the Minister for prior approval. before production begin, they had sent it's script for vetting by authorities, especially the Minister's Office and it was approved.

This film is the first of it's kind in having to undergo twice Censorship Board evaluation and duly approved. This is odd when considering that the Ministry of Home Affair had committed a statement for self censorship last year.

Tanda Putera was postphoned intentionally by FINAS's Naguib and perhaps Apendi by withhelding grant for promotion, marketing and distribution, including making the film prints and held back promised compensation for cost overrun to meet September 15th deadline.

There is only one reason to blame for the postphonement. Politics, general election and gutless leaders.

The country has to stop moving and operating because the election is more important and the rest of the country have to play along to the tune of politicians and their insecurities.

The other nations in the region, like Thailand, Singapore, Indonesia etc. have made great stride and regional impact of their creative industry. Only after much convincing, Dato Najib's administration  realised it's importance and allocated funds to develop the industry.

Thus far, PM's voice is lost as bureaucrasy is stifling the disbursement of the fund. FINAS effort and program is merely ad-hoc and shows shallow understanding of both Management and Board of Directors in the process to develop the local film industry.

Film would have been a useful media tool for the government but having such insidious characters running the Ministry, as members of the Board and management of FINAS, and crony businessmen given monopoly, who are more interested to benefit themselves, then develop the creative industry, it has backfired.

They have meddled into the livelihood and made work scarce and difficult for actors/actresses, singers,  karyawans and production back-up crews. The whole industry knows programs for RTM is supplied by two politically connected business person.

They know the conflict of interest by certain member/s of the Baord of Director of FINAS to use Geran Industeri Keratif managed by FINAS fund for his film that was destined to bomb but he resisted advise.

Although they are generally apolitical by nature and supportive of government, they are now protesting by giving support to opposition. Parties like PAS are willing to provide them monetary lifeline in exchange as being crowd puller and publicity. 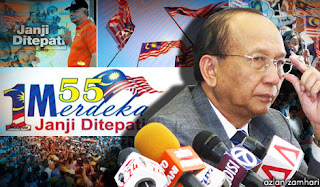 Why should Rais be worried of the reluctance of Chinese voters to vote BN?

He has successfully alienated BN from the youth icons which are usually performers and practitioners of the creative industry. In addition, he has made many young supporters and potential voters from young fence-seaters into protesters.

Not to mention those TV audiences revolting to the sight of RTM news being for the purpose of extending Rais's political shelf life. The much talked of Datin Rosmah Mansor's media presence pales in comparison.

Syabas Rais! At the rate he is going, Pakatan can sit pretty and wait for Rais to turnover BN voters into BN protest votes. Cabinet only need to assist by continuing to flip flop on established policies, decisions, and procedures.
at 10/25/2012 01:51:00 PM

You are truly right and correct !!!

I think the gov made a right decision consider that this film may indirectly indicate that Chinese are the one who started the violence which is not true. In fact this fictional film should be banned from general viewing as many do not have the backgroud knowledge on this incident and may result in bigger gaps of racial division especially among malay and chinese.