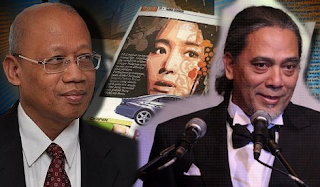 Since our last posting on Dato Chamil Wariya's apology to Theresa, he had clarified his position with Rockybru. His right to reply was duly given. [Read Rocky Bru's update here.]

Does it mean the issue against Chamil has ended and he is allowed to lie low?

Firstly, let's not confused this and the previous posting with the issues surrounding Theresa Kok. She is hardly an issue here. It is about Chamil's conduct.

To answer the question, it is not over. Chamil lied to Rocky.

He should clarify whether or not he negotiated and agreed behind his co-defendent, Utusan Malaysia's back. But it is Utusan Malaysia that end up paying Theresa's RM50,000 cost?


I spoke to Chamil on the phone to get the real story about the "apology". An intriguing episode, indeed!

First and foremost, Chamil said he did not attack Utusan Malaysia or its editors in his "apology" to YB Teresa Kok. "I was making references to the professional conduct of a certain editor".

What was reported by Malaysiakini and not The Malay Mail is as per his statement. Read it here.


Secondly, he did not apologize to Teresa Kok for defaming her. "I cannot apologize for something I did not do. But I'm sorry if the cerpen that was published by Mingguan Malaysia had hurt her or any of my readers' feelings".

It is a standard statement in any legal apology.

If the cerpen is not his, why does it took him four years to disclaim himself as the author of the said article?

It would have been easier for Utusan Malaysia to go it alone in court without a co-defendent stabbing them from the back like this.

As far as the public was made to understand, Utusan Malaysia and Chamil were jointly sued by Theresa. It means he has accepted to take the responsibility with Utusan Malaysia to defend the article.

Don't tell us that after four years down the road only did he felt a sense of conscience to make the  statement on October 12, 2012.

There must be something else, most likely monetary in nature, that made him consider to make that irresponsible and betrayal statement in court. The RM100 million lawsuit may have psyched him and like any typical coward, he wanted to only save his skin.

A source said he negotiated with Theresa Kok and agreed to the terms of settlement without the knowledge and agreement of his co-defendent Utusan. However, it is Utusan that ended up absorbing the cost claimed by Theresa Kok and perhaps Chamil too.

The apology made by Chamil puts Utusan in a difficult position and they are left with no choice but to accept the settlement negotiated by Chamil without their consent.

Many believed that the character YB J in the article has no resemblence to YB Theresa Kok and Utusan Malaysia can win their defense.

One can only recall the episode involving Dato Marina Mahathir, who was upset to have her article being edited by The Star after writing for them for more than 20 years (or was it 25 years?). When she was grumbling over it, many journo-bloggers blasted her prima donna attitude.

In his statement and mentioned in the Malaysiakini report, Chamil was upset because his article was edited and as a Dato' and a man with a name, he expected a professional courtesy from Utusan to get his approval first before publishing the story.

Another case of a prima donna.

Chamil may have felt his original script would absolve him from any lawsuit from Theresa Kok, but the newspaper think otherwise. The newspaper is not legally bound to seek his permission to edit his script.

The issue of whether the editor should make the professional courtesy to seek his permission is an issue that will not stop till the cow come home. Malaysiakini, Suaram, CIJ, SEAPA, Merdeka Center and MAFREL can raise money on the pretext of seeking sponsorship from George Soros and NED to organise a Seminar at the NYU School of Journalism on this ethical issue.

The point is the newspaper have every right to protect themselves legally and edit in accordance to their editorial objective.

Chamil claimed that his reputation as a writer was affected by the lawsuit. He can't hope to redeem himself by this act of betrayal.

Anyone seeing him as moderator on television shows should pick up the remote and press away to other channels. Why listen to someone that cannot be trusted and have no honour?
at 10/10/2012 09:18:00 AM