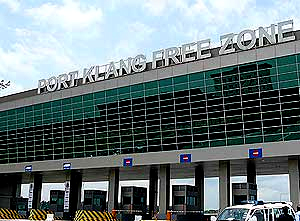 The trial against former Transport Minister, Tun Ling Leong Sik commenced for quite sometime without much getting attention. It is at stage where the defendant have to put up their defense.

Whether it is because mainstream, particularly The Star did not give much coverage or nothing sensational was happening in the trial delayed due to Tun Ling's sickness. Like it or not, sensation sells and newspapers are still a business enterprise.

Defense is calling three Prime Ministers to the stand as witness. Today, Tun Dr Mahathir is expected to be on the stand. More drama will ensue and the trial will get more attention from hereon.

Before a case was made out on the dubbed Port Klang Free Zone (PKFZ) scandal, some aspect of the issue may have been spinned out of proportion by opposition. It turned us off from tracking this case. As usual, the public innocently took every words of the opposition hook, line and sinker.

However, as the defense is making their case, many aspect of the case seemed to take strange turns.

But we are no lawyer. 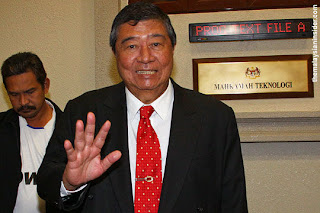 For a background of the case, we extract from FMT here, below:


... Ling, 68, was charged with deceiving the Cabinet to approve a land purchase in Pulau Indah for the purpose of the Mega Distribution Hub project in Port Klang, according to the terms agreed between the tunrnkey contractor of PKFZ, Kuala Dimensi Sdn Bhd, and Port Klang Authority (PKA).

Ling was accused of committing the crime with the knowledge that he could cause a loss to the government, which he was bound by law to protect.

The offence was allegedly committed at the Prime Minister’s Office here between Sept 25 and Nov 6, 2002.

Ling pleaded not guilty to the first charge of cheating under Section 418 of the Penal Code and an alternative charge under Section 417 for an alleged offence committed at the same time and place.

If found guilty, he could be sentenced up to seven years in jail for the first charge and up to five years’ imprisonment under the alternative charge.

He could also be fined if convicted.

As the trial begins, the specific of the case becomes clearer.

Ling is charged for cheating the cabinet ministers by concealing that an  additional interest rate of 7.5% was added to the purchase price of the property by PKA for the PKFZ project from KDSB.

The public prosecutor alleged that Ling knew the Valuation and Property Services Department had determined the land price at RM25 per square foot (psf) and he had dishonestly induced the cabinet to give its consent to PKA to buy the property from KDSB.

PKA end up paying KDSB RM1.808 billion for the property, which is an excess of RM720 million due to double interest.

Ling is also charged for cheating the government to believe that the RM25 psf and interest rate of 7.5 per cent were certified by the department when he knew such endorsement was not given.

In an old posting on Boxing Day 2010 [read here], a commentator gave his view on the scandal. In his words, KDSB became the property vendor by virtue of the following:

Thus far, the name of Dato Seri Dr Khir Toyo and UMNO Selangor did not crop up anywhere.

Only the name of former Selangor exco, Dato Abdul Rahman Palil as Chairman of the mentioned Koperasi, Koperasi Pembangunan Pulau Lumut (KPPL). He is also a member of the Board of PKA.

He was then and still is the UMNO Kapar Division head.

However these name are not charged for any offense. Later perhaps, if there is any offense committed.

But one thing can be sensed is that more name will surface as the case proceed and new cases will arise from the current trial. it. Already the Transport Minister during the time of Tun Dol, Dato Chan Kong Choy is being charged.

Whatever the rumours and allegations against KDSB or those related to KDSB and KPPL, one argument claimed that it was a fair deal and supported by documents. The original land was a swampy land belonging to KPPL and it is hardly worth anything.

The price was believed o be fair and supposedly supported by valuations. The claim is KDSB spent money to improved the soil condition and build infrastructure to make the alleged RM20 psf gain.

Since KDSB raised money through issuance of bonds, the claim by Lim Kit Siang was that the whole mess will cost the Government more than RM10 billion.

That we know came from the number supplied by the late blogger, Ancient Mariner. Unfortunately, he passed away near the time we were supposed to seek his clarification.

He may have wrongly used compounded interest and claimed bondholders must be reimbursed for a bond issue with no Government guarantee. Or was there?

In investing, you can't win all the time, you win some and you lose some. So it was a turn-off to hear Kit Siang going everywhere with this lie.

He testified in court but the prosecution will apply to impeach his testimony due to inconsistencies.

During investigation by police, Kadir said the cabinet agreed price has to be the final price. In court, he said to the contrary and the 7.5% interest rate be added on without cabinet approval.

Kadir quit his UMNO membership. He is the Deputy President of Tengku Razaleigh's initiated-NGO, AMANAH and is now campaigning for Pakatan Rakyat. In the meanwhile, his brothers remain in UMNO.

Recently in a ceramah, he claimed he heard a message from God. He was definitely in a state of drunkedness. But can he claim, to quote from the Sufi poet's Rumi, "Our drunkedness does not come from wine"?

Kadir may be considered a political opponent now, however right is right. Hopefully he is not doing a drama.

Isn't it strange that an Information Minister from the 2002 cabinet taking a stand? The likelihood is someone with the opposition is more willing to take a stand against the prosecution i.e. the Goverment than those still with the ruling party.

The practise in the property market varies. Since it involves public money and the sum of RM1.808 billion to buy a piece of land is huge, Ling should rightly not be taking it upon himself to make such decision.

It should be a "collective and consensus" decision of the cabinet.

Ling claimed in court that Dr Mahathir was always kept up-to-date on the development of the project that was concluded in 2002.

At that time, Dr Mahathir was Prime Minister. he is scheduled today to clarify matters.

Tun Dol was subpoened too. If he was aware of what was happening, he will likely be asked to explain for what happened consequently during the implementation in which he was Prime Minister from 2003 till 2009.

The rumour making it's round is that Tun Dol had brought in Azim and Khairy Jamaluddin to use the project to raise campaign fund for 2008 general election.

That is just talk but it is widespread amongst lawyers.

However, it is strange for Ling to subpoena Dato Najib. For what? As member of the then cabinet?

The crux to the matter is: Did Ling made the decision to double account the interest of 7.5% in the price?

That will have to wait for the court to decide because also to be considered was whether Ling is expected to know the nitty gritty in the valuation of properties?

Another part of the mentioned commentator's comment was on who suggested adding on the 7.5% interest rate. He/she said:


... Rais Yatim was the Minister of Law. He advised the gomen to allow Kuala Dimensi buy the land from the koperasi.

Under acquisition act, the gomen no need Kuala Dimensi. The gomen can buy the land straight from the fisherman. UMNO korup bro, apa nak buat?

After selling the land to gomen PKFZ for RM20 per square foot, Kuala Dimensi bought more land to replace the land they have sold to gomen.

The land was bought by Government at RM25 psf and not RM20 psf. Already the detail of that comment is wrong.

Set aside any past issue against Rais. Is it justified for the commentator to make such claim on Dato Seri Utama Dr Rais Yatim Phd?

For the allegation on Rais to be valid, it will need proof to show he had put his recommendations in writing with his John Hancock on the document. Otherwise it is an unsubstantiated allegation.

If it had been Rais, is it wrong for Rais to advise and recommend? Does it tantamount to any offense?

Why only Rais was accused? Could there be others involved in making suggestions, recommendations, and decisions outside the cabinet meeting?

Naughty article but yeah . . . why is rais not drag to court?

Or he will be charged later?