More on "Failure to Communicate" 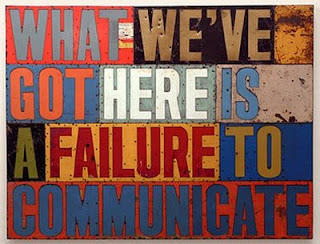 There was some responses to our past posting, Santa Musa and "Failure to Communicate".

Just 'cause we corrected a mistake in interpretation due partly to ourselves and partly "failure to communicate", it doesn't mean we will release comments with nasty aspersions and bad languages.

That is no way to communicate. Do appreciate that we are usually man enough to give the right to reply and correct when we are wrong.

We should be lay to rest the performance-based share scheme issue of Sime Darby and the "Failure to Communicate", but yesterday, over lunch, and after dinner and a late night SMS, the subject kept coming back.

Over lunch, it relates to the AES. Over dinner, it an interesting experience on rural development. And finally, the SMS came from the most unexpected person to tell us that a Guns 'N Roses song had "Failure to Communicate" in the lyrics. 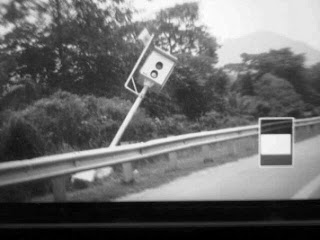 There has been mix responses to the implementation of the AES.

One wonders whether the state government can override the Road Transport Department (RTD) under the auspices of Ministry of Transport. Do not try logic please. We want to know whose jurisdiction and authority does the law say.

Nevertheless, the Pakatan Rakyat strategist are smart and quick to score political brownie points on this issue. The ceramah propaganda is going as "what use is the RM500 BR1M, when traffic fines are non negotiable at RM300. What's left to buy?"

We would reply. Common rakyat abide the law. It is Pakatan Rakyat leaders that breaks the law without conscience. [This refers to the big outstanding traffic fines raised by Rocky and Apanama yesterday here and here.]

Taking back that bit of political sling shot. why should we defend and comprised with lawbreakers. Common rakyat are not lawbreakers.

Since the commencement of AES, the public raised issue on the locations of the cameras, lack of warning, and weaknesses of RTD policies, which before AES have been under lid.

And, the issue goes into emotional overdrive when opposition wildly accused RTD and naturally, UMNO also gets the blame (despite the Minister being from MCA) for alleged cronyism practises in the privatisation of AES.

Lets be precise, crony to who? No idea?

We do not have any issue with privatisation. Government can't allocate RM800 million to implement AES for the whole country. The need to minimise the reasons for accidents that is being addressed by AES is long overdue. Accidents cost the country billions and human lives, especially young lives.

Bit by bit implementation won't do. It is half measures.

If there is any issue with AES, it is the summon-based revenue for the operators. Why can't it be based on per pictures taken? Perhaps, the privatisation is based on a performance based incentive consideration.

Seriously, can BN lose the election over AES?

Over lunch yesterday, we heard a politically well informed friend believed BN could lose if it is not handled properly. He have the best answer to date.

In the past, whenever government introiduce anything new, they usually do a trial run for say 3 months and educate the public first. After getting some feedback and fine tuning the system, only then the new system fuly commenced.

It means it is merely a case of "Failure to Communicate." 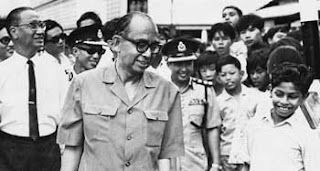 The experience in the need to communicate was shared by a friend after dinner last night.

He started his career in a District Office of Selangor as Assistant District Officer (ADO) during the premiership of Tun Abdul Razak and Menteri Besar time of Dato Harun Idris. May god bless these two souls.

When he became the most senior officer in the district, he requested from the boss i.e. most likely to be the District Officer to be assigned Rural Development work.

That is rather odd because the most senior in a District Office tend to do land and planning. Simply because it is the most challenging technically.

By setting the precedent of having rural development being given to the most senior, it was consistent with the emphasis of the times.

He related about the training he received at INTAN and at that time Tun Razak was on a rural development overdrive. Throughout training, they were thought on the sociology and psychology of rural community.

In a rural community, one should be doing more listening than talking. He said the rural folks response better when encouraged to participate and give their view and suggestion.

As officer, one should not talk down but give them the leeway to speak. Off course, subtly one guide the discussion one's way. The important thing is the idea must come from them and not us talking down on them.

He realised that by getting them to suggest, he gets great ideas from them, cooperation, and dedication from them.

For a start, he asked them for suggested time to hold meeting and they suggested to do it after isya prayers at nightand carried on till late midnight. That way he gets more than cikgus attending since only they can turn up at 3 PM. And he gets near 100% attendance and participations.

Without realising it, what he had done was to improve communication. He gets his views and suggestions across, directly or indirectly. And he gets great feedback which bureacrats could not think off.

There was a case of the need to build a road for the kampung.

He brought down the engineers, and planners and over kopi and kueh, they discussed it after isya prayers. Naturally, the engineers would talk about technical stuff. Water, hydrology, earth structure, and requirements.

Unthinkable to all but was most relevant to them came as a suggestion to look into the immediate needs of children going to school. That idea from a kampung folks because the criteria for engineer and planner to build the road for that immediate needs and expansion in mind for the future.

In a kampung setting, it is not one's degree, urbanness, and intelligence but trust factor. When they trust you, one's work is plain sailing from thereon. Ganing trust, one has to be part of them and earn their respect.

Contrary to negative perception of kampung Melayu folks being lazy, or resisting change or other  stereotyping against them, it is quite untrue. It is only a case of trust and convincing.

My friend used an example to introduce proper waste management for a kampung as example. It is perhaps disgusting to share the story but they need to be shown and proven to be good before they will adopt and change.

When they believed and trust, they will trust and abide without question. That he told the story of a Chinese officer who was scared to enter the kampung in fear of being perceived as communist.

It is a joy to bring development and quality of life to the kampung folks. It was made a joy because of good communication and some bit of patience.

His benefit for the extra effort will be during fruit season as the best fruits comes in bountiful from the kampung folks before their own family takes a bite.

"Failure to communicate" is in this Guns and Roses's song, "Civil War". It is more raunchy than "Patience".

The You Tube below:

She should know about communicating with rural folks. This rockin' Chinese gal grew up in a plantation. Speaks and writes Malay well. And now learning Tamil ....
at 10/30/2012 04:11:00 PM

Honestly the government is stupid.

This AES should only be introduced after the election. This sort of thing makes the rakyat benci the government.

During last election, i had roti canai at a mamak restaurant before going to a school to cast my vote. As i returned to my car, there was a summon from MBSA for not paying parking fee, time-stamped at 8.06 am.

While i admit i was wrong, i think the officer should have given a bit more time before issuing summon because i was only 6 minutes late before enforcement time started. That is what we call budibicara.

Anyway, the summon made me extremely angry and i happily voted for PAS and PKR. Kinda saying, 'you piss me off, i piss you off too'. Indeed BN lost both parliament and state constituencies in Shah Alam. Padan muka. RM30 summon was enough to justify me to kick them out from government.

Anon is right. UMNO just let the corrupt JPJ and MCA make the people hate the Government. The speed limit are not practical if 60,000 people broke the law. Did any of these 60,000 cause any accident? If not, that proves that the arbitrary speed limit is wrong!

Mahathir thought his crony was on to billions with IWK the unquantifiable and uncontrolled service.

But every citizen sees it as a tax. In Selangor the water bill is free but you have to pay RM8 to IWK!

If you dont pay, they cannot stop the so called service!

So IWK sued the citizens and they get angry and voted out UMNO.

Why spent billions when there are 40,000 unemployed graduates? Why not do it manually?

Because someone in JPJ or Transport Ministry want to be billionaires?

So samanlah... its sayonara to the stupid MCA Transport minister and even UMNO.