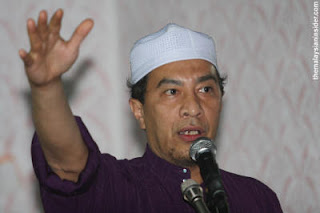 Murphy's law states that "Anything that can go wrong, will go wrong".

When his luck ran out, anything that can possibly go wrong to Dato Husam Musa, does go wrong. He is now in a foul mood with Murphy and we are only too pleased to see him be taught a lesson in humility.

This is giving a picture that all is not well between him and the state government.

Husam was not appointed as a state exco member although he had proven himself and tipped to be the Mentri Besar upon former MB Datuk Nik Aziz Nik Mat’s stepping down. 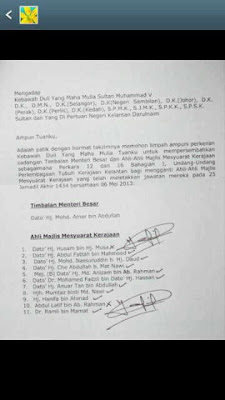 Since after the May 5 general election, Husam has been in the ‘war mood’ as he was sidelined and considered as ‘dumped’ by the new MB when he was not picked as an exco member, a position he held under Nik Aziz’s tenure as MB where he was a trusted ally and given the finance portfolio.

Known for his smartness in filling up the party’s coffer and even the state, Husam is known for his alignment with Parti Keadilan Rakyat (PKR) de facto chief Datuk Seri Anwar Ibrahim and has been closely following all events Anwar leads without fail.

He had even came out with an edict (fatwa) that those who joined the Black Out 505 rally and died in the cause was considered to die as a martyr or died of jihad.

Such is his loyalty to Anwar that the veteran fundamentalist in the party get ‘jittery’ and the obvious thing the veterans would do is to ‘cut him off’ from the leadership line-up to stop the ‘cancer’ from spreading.

With just three months to go for the party assembly when election to the leadership is scheduled, Husam may not let his ‘goal’ slip away as he made much inroads in trying to stay afloat and align the party to PKR.

Husam had managed to get Nik Aziz to support PKR and DAP and he is considered as the ‘glue’ in the relationship between the party and the others in the Pakatan Rakyat (PR).

When PAS leadership decided to stay away from the Black Out 55 rally, Husam and those aligned to Anwar who included deputy president Mohamed Sabu and several others had influenced the leadership to ‘be together’ in the final rally.

But, the response from PAS members were not encouraging despite the leadership gave the greenlight ‘only for the grand finale’ at Padang Merbok, Kuala Lumpur. 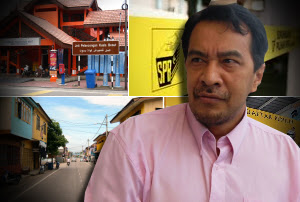 At the Kuala Besut by-election, Husam was the Pakatan Rakyat Election Director and one can visibly see the anomosity between Husam and president Dato Abdul Hadi Awang as his proxy, PKR Youth openly refused to cooperate with PAS and announced their lawsuit against Hadi.

Again, Murphy's law was in play.

The by-election that was to lift Husam's profile in the party did not worked out as planned. Husam himself fell to Dato Idris Jusoh's psywar to accept teh election Director post and chose a candidate from his men that bungled his chances by shooting his own mouth.

Given such background and the ‘under current feud’ between the two factions, the coming party poll is expected to be wild and interesting as the veteran fundamentalists attempt to take control of the party while Husam and friends attempt to unseat them.

The November assembly will determine PAS future as the veteran fundamentalists including party president Hadi attempts to gain control of the party against the onslaught of the so-called young and intellectuals.