Beginning of the end for Anwar in Sabah 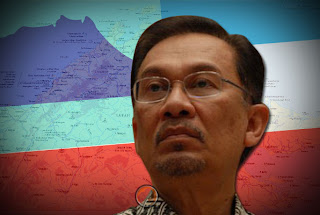 When Dato Lajim Ukin left BN to join Pakatan Rakyat coalition in Sabah in July 2012, we wrote Lajim's planned departure hardly left a dent. That was at a time when Anwar was trying to pull off another 916 to draw out BN's Sabah politicians into Pakatan Rakyat.

We had confidence with the Aman brothers which we described elder brother Dato Musa Aman as politically shrewd that one an call him as Yahudi Melayu Terakhir when it comes to Sabah politics. [Read it in April 2012 posting here].

The Lahad Datu incident may have helped boost patriotism and BN but even when the RCI was on-going, we were confident it will open Anwar's Pandora box instead of hurting Tun Dr Mahathir's legacy and BN's Sabah politics. [Read it here.]

True enough, Lajim could not defend his Beaufort parliamentary seat.

And, he may not be able to hold to his Klias state assembly seat since High Court accepted BN's petition. [Read Anwar Ibrahim bitching about it here.] Anwar knows that his days in Sabah are numbered.

The latest development is beginning of the end for PKR in Sabah. Sabah's Daily Express has the story today:

Kota Kinabalu: The appointment of Sabah opposition chief Datuk Seri Lajim Ukin as the State's Parti Keadilan Rakyat chief by PKR adviser Datuk Seri Anwar Ibrahim has not gone down well with some party members, particularly four Sabah PKR State Assembly members Matunggong Assemblyman, Jelani Hamdan, said while they respect the decision by Anwar to appoint Lajim, who is believed to have joined the PKR only recently, they are dissatisfied that they were not consulted for their views.

According to him, he and three other PKR elected representatives - Terrence Siambun (Moyog), Jeremy Malajad (Kadamaian) and Christina Liew (Api-Api) - had handed over the proposals to both Anwar and Lajim regarding certain issues.

"If these proposals are not considered, we will not be accepting any positions in any committees or within the party," he said, Sunday.

He also said that they might be emulating the approach by counterpart Assemblyman for Luyang (DAP), Hiew King Cheu, in relinquishing all their current positions in the party.

The proposals, he said, which have been agreed to by Sabah PKR assemblymen, were given to Anwar during PKR-held Hari Raya Open House in a hotel here last month.

"Lajim knew about the proposals because we also gave him a copy," he said.

Nevertheless, the four elected representatives will wait for the appointment of the Sabah PKR Leaders' Council before making the next move.

"We will wait who Laijm will appoint into the council and also whether he will consider and respect our proposals," said Jelani.

He said Lajim replaced former Sabah PKR chief, Ahmad Thamrin Jaini, following the petition by about 16 or 17 division heads or acting heads for Thamrin to be ousted.

"Probably they wanted a new face (to lead Sabah PKR)," he said.

He voiced concern that there would be "casualty" in Sabah PKR similar to when Lajim was appointed as Sabah opposition chief.

He cited Hiew as the "casualty" for supporting Tamparuli Assemblyman, Datuk Seri Wilfred Bumburing as the state's opposition chief.

Anwar said Lajim's appointment as Sabah PKR chief has been endorsed by the party's Supreme Council.

Before this, PKR was struggling to stabilise and unite the party following poor appointment of Ahmad Thamrin Jaini as PKR Liaison Chief for Sabah by Azmin Ali. That resulted in Dato Dr Jeffrey Kitingan leaving PKR to established his party, STAR.

Prior to the general election, PKR Tuaran Chief and member of PKR for 14 years, Anseri Abdullah left PKR following his Tuaran area was given to Dato Wilfred Bumburiang to contest. [Read FMT's april report here and AIDC here]

At around the general election time, we said 16-17 of the PKR cabang would close shop.[The link to find] In all likelihood, the time maybe now. With the upcoming UMNO party election and Sabah Liaison Chief, Dato Musa Aman is running for Vice President, it can't be any better.

Already, one Dato Akbar Khan Abdul Rahman from his own Division of Libaran is urging him not to contest on the pretext that he is merely a state level leader and has to emulate other state Menteri Besar and Ketua Menteri to focus on the state and not deny Sabah another seat.

However Akbar Khan is linked to a desperate Dato Hishamuddin Hussein Onn and Akbar's son Firdaus Khan is said to be a runner for Dato Shapie Apdal, an incumbent Vice President most susceptible to get knocked off for his many misadventures.

If Musa wants to make it, he must be beyond a Sabahan whose seldom to engrossed with Sabah politics that they have no consideration for happenings at the national and international level.

Younger brother Dato Anifah Aman is more qualified in that aspect but he is believed to be too busy with an international assignment abroad.